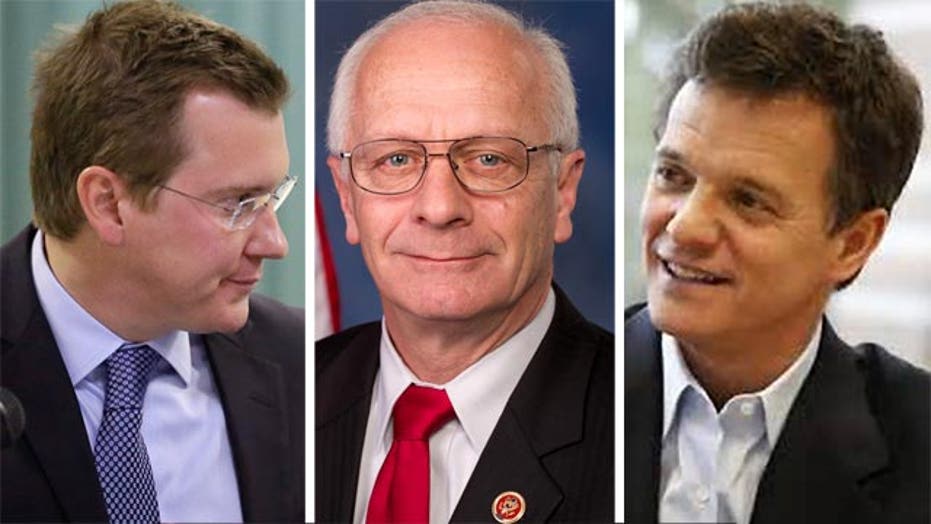 House Democrats are not expected to make big gains in the midterms, but they are optimistic about winning a Republican-held seat in Michigan in the aftermath of a nasty GOP primary in which a “foreclosure king” defeated an incumbent portrayed as a “Santa Claus impersonator.”

Lawyer and businessman Dave Trott trounced incumbent Rep. Kerry Bentivolio in the party’s August primary, but not before a Tea Party group labeled him a “foreclosure king.”

Democratic nominee Bobby McKenzie, a former State Department counter-terrorism analyst, has seized on the attack line and is now essentially tied with Trott, according to an internal campaign poll by San Francisco-based Tulchin Research.

Leading pollsters are still giving the edge to Republicans in the race for Michigan's 11th District, which is outside Detroit.

But Bentivolio, who admits to dressing up as Santa, has started a write-in campaign as an independent candidate and will likely take votes from Trott.

Political observers say Bentivolio got into Congress in 2012 essentially by a fluke, so there was little surprise that he would lose this year’s primary.

When five-term GOP incumbent Rep. Thad McCotter was disqualified in a ballot-signatures scandal and resigned in July 2012, Bentivolio lost in September to a Democrat in a special election to fill the seat for a few months.

However, a month later he won the race for the full term as the only qualified Republican on the ballot.

Within months of arriving on Capitol Hill, Bentivolio was already being targeted as one of the House incumbents most likely to lose in 2014.

Such predictions were in part based on Bentivolio’s meager war chest being no match for the deep-pocketed Trott, a Duke law school graduate who purportedly spend more than $2 million on his 2014 primary victory.

“Even I figured he’d win,” Bentivolio told FoxNews.com. “How do you compete against that?”

Still, the most significant expenditure in the entire race appears to be the primary ad paid for by the Tea Party-affiliated Freedom’s Defense Fund that hits Trott, whose family-run law firm processes foreclosures for lending institutions.

“Foreclosure King Dave Trott evicted 101-year-old Texan Hollis from her Detroit home of 65 years,” the narrator says in the 30-second spot. “Stranded and in a wheelchair, she was dumped on dangerous, rainy streets. … all to line the pockets of greedy Dave Trott.”

Trott announced after the primary that he was selling his stake in the practice, in an apparent attempt to soften the criticism.

But it’s unclear whether he remains part of other related businesses, which combined with the law firm are considered by critics to be the biggest “foreclosure mill” in Michigan.

The Trott campaign did not return calls seeking comment.

Though Trott has the backing of such establishment Republicans as Mitt Romney, Bentivolio says he was undermined largely by the leading state Republicans.

“You’re supposed to help a freshman congressman,” said Bentivolio, an Iraq veteran, former reindeer farmer and auto designer. “But they did everything in their power to undermine my seat. … I guess I didn’t go to the right schools.”

The Michigan GOP party on Thursday made clear its role in 2012.

“We always support out incumbents, but we stay out of primaries,” party spokesman Darren Littell told FoxNews.com. “We thank the congressman for his service.”

The Tea Party-backed Bentivolio also argues he passed conservative-minded legislation while in Washington and even had the backing of House Speaker John Boehner, whom he said commended him for knowing when to vote with the caucus or for his district.

Bentivolio says he was okay with Trott’s attacks during the campaign, but felt he went too far by criticizing him on social media after the primary.

He said he appealed to Trott to knock off the attacks, then tried to quiet him with threats of entering the race before deciding on the write-in campaign.

“I warned people,” Bentivolio said. “I worked in Congress and on Ronald Reagan’s election. And they call me a ‘newcomer?’ I got news for them.”

He said the attacks included a whisper campaign that questioned his military awards.

“And now I want my reputation back,” said Bentivolio, still rankled that dressing up as Santa at charity events for children would be used against him.

Trott campaign manager Megan Piwowar said to The Associated Press about Bentivolio’s write-in effort: "If he wants to disrespect the overwhelming number of voters, that's his choice."

McKenzie campaign manager Tony Coppola thinks the race has tightened because of the combination of Trott’s questionable business practices and Democrats having a good candidate.

“Bobby tried to make the country safer at the State Department, and the Republican candidate put 100,000 families out of their homes, 80,000 by his own admission," he said. "That’s a stark contrast.”

Coppola points out the race also has another potential spoiler, Libertarian candidate John Tatar who got 2.7 percent of the vote in the 2012 race for the seat.

Still, Coppola says the campaign is sticking with the same strategy that got McKenzie this far, despite the late-stage changes.