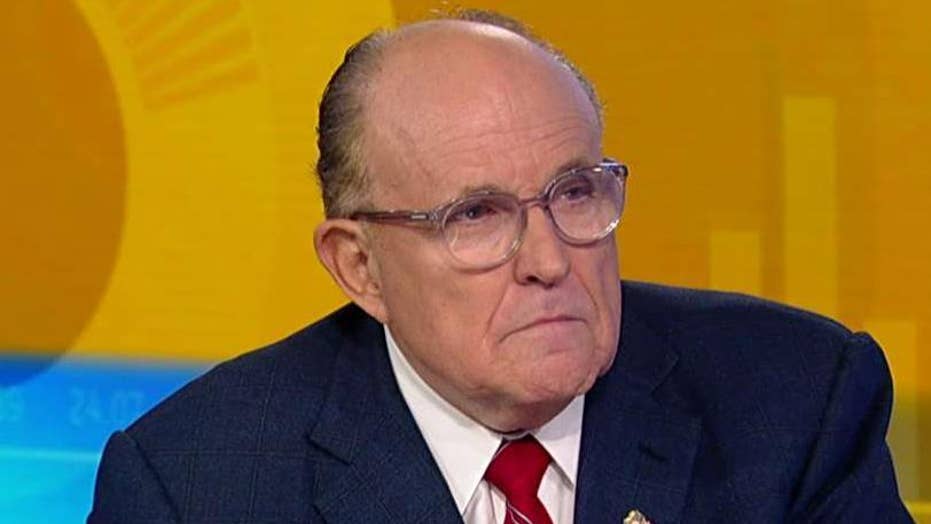 Personal attorney to President Trump Rudy Giuliani says if he is called to testify he will take that up with his client.

President Trump's attorney Rudy Giuliani defended his investigation of Democrats, including Joe Biden and Ukraine, while pointing a finger at the Obama administration and its potential involvement in corruption.

"My role is very, very simple. I'm a lawyer defending a client," Giuliani told host Maria Bartiromo on Fox News' "Sunday Morning Futures," stating that he was exploring a lead on information that he claimed not only could vindicate Trump regarding claims that he colluded with Russia in the 2016 election, but that could show that it was Democrats who colluded with Ukraine to hurt Trump's campaign.

"If you can prove that somebody else did it, or there's some other explanation for it, then you pursue that vigorously."

During a July 25 phone call, Trump made reference to the cybersecurity firm Crowdstrike, which had investigated the hacking of the Democratic National Committee's computers during the 2016 campaign, but did not turn over the server to the FBI. Trump indicated that the server could presently be in Ukraine.

Giuliani also defended his role in exploring allegations that Joe Biden, as vice president, pressured Ukraine into firing top prosecutor Viktor Shokin by threatening to withhold $1 billion that was owed to Ukraine.

“I wasn’t trying to get dirty information on Biden. Biden was in our way," Giuliani said.

Giuliani brought with him an affidavit from Shokin which claimed that he was pressured into resigning because he was unwilling to drop a case against energy company Burisma Holdings, where Biden's son Hunter was a board member. The affidavit states that it was pressure from the U.S. -- specifically Biden -- in the form of withholding the billion dollars that led to Shokin leaving office.

Giuliani also raised suspicion about what Biden knew about his son's business dealings while he was vice president, and what Biden's own role was. He claimed that Biden's son received money from China in an effort to buy the favor of the vice president.

“The pattern is a pattern of pay for play. It includes something very similar to what happened to the Clinton Foundation," Giuliani said. "Which goes to the very core of what did Obama know, and when did he know it?"

Giuliani referred to a December 2015 New York Times article about Hunter Biden, Burisma, and a Ukrainian oligarch, and how the younger Biden's involvement with the Ukrainian company could undermine then-Vice President Biden's anti-corruption message.

"The question is," Giuliani asked, "when Biden and Obama saw that article, about how the son was pulling down money from the most crooked oligarch in Russia, did Obama call Biden in and say ‘Joe, how could you be doing this?’”

Later on, when asked about a report from earlier Sunday morning that Giuliani was working with attorneys Joe DiGenova and Victoria Toensing on getting information on Biden from Ukraine, the former New York City mayor said he "didn't work with anybody to get dirt on Joe Biden," again saying that the information "was handed to me by the Ukrainians."