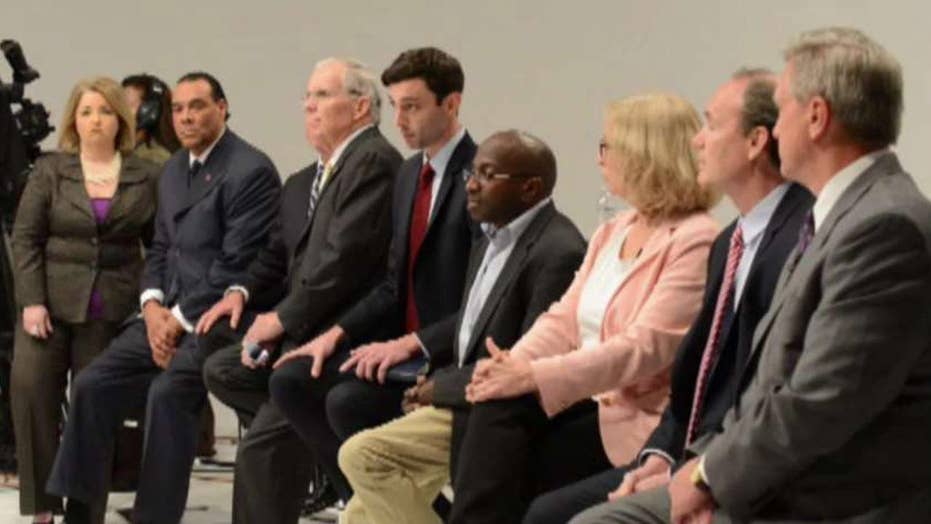 Republicans, in the closing hours of Tuesday’s hard-fought Georgia congressional race, are hitting the Democratic frontrunner for living outside the district and portraying him as a conservatives' nightmare who would increase taxes and take away guns.

The race has turned into a national contest, with top candidate Jon Ossoff attracting more than $8 million in largely outside donations. Liberals are pinning their hopes on Ossoff to win the conservative-leaning House seat and deliver a rebuke to President Trump.

WHAT YOU NEED TO KNOW: GEORGIA SPECIAL ELECTION

The 30-year-old Ossoff, a filmmaker and former congressional aide, is the leading candidate in a crowded field. But Republicans hope to keep him from garnering a majority on Tuesday to force a June 20 runoff that they think they could more easily win.

Trump has taken an active role in the race -- a sign of how much Republicans want to keep the seat and blunt any momentum Democrats might get toward next year's midterms.

“Democrat Jon Ossoff would be a disaster in Congress. VERY weak on crime and illegal immigration, bad for jobs and wants higher taxes. Say NO,” the president said Tuesday on Twitter.

“Republicans must get out today and VOTE in Georgia 6. Force runoff and easy win! Dem Ossoff will raise your taxes-very bad on crime & 2nd A,” Trump added minutes later.

He also recorded a get-out-the-vote call in which he says, "Liberal Democrats from outside of Georgia are spending millions and millions of dollars trying to take your Republican congressional seat away from you. Don’t let them do it. ... I need you to get out to the polls."

In a late twist to the race, Republicans are also hitting Ossoff over technically not living in the district.

"The surprising early leader in the special election to replace Tom Price in Congress doesn't live in the district," the Republican National Committee said in an email blast Monday evening to reporters.

The National Republican Congressional Committee on Tuesday morning said Ossoff found the time to be on TV shows “in lieu of voting for himself … because -- well -- he doesn’t live in the district.”

Ossoff explained to CNN that he grew up in the district but lives about 10 minutes away with his girlfriend of 12 years.

“I am a mile and a half down the street to support Alicia while she finishes medical school,” he said. “It’s something I’ve been very transparent about.”

The winner of the special election keeps the seat for just 18 months, until next year’s midterm elections.

Republicans have held the House seat for nearly four decades. The last member in the seat was Tom Price, now Health and Human Services secretary, who won reelection in 2016 with roughly 60 percent of the vote.

However, Trump narrowly defeated Democratic rival Hillary Clinton in that district -- signaling to Democrats that an upset could be within reach.

To outright take the so-called “jungle primary,” the winner must get more than 50 percent of the vote or face the second-place finisher in a runoff.

Ossoff is a former staffer to Rep. Hank Johnson and intern for civil rights icon Rep. John Lewis, Georgia Democrats who have backed his candidacy.

Gingrich, a Fox News contributor, also predicted Republicans would after Tuesday coalesce around a single candidate and defeat Ossoff in June, with perhaps Trump campaigning in Georgia.