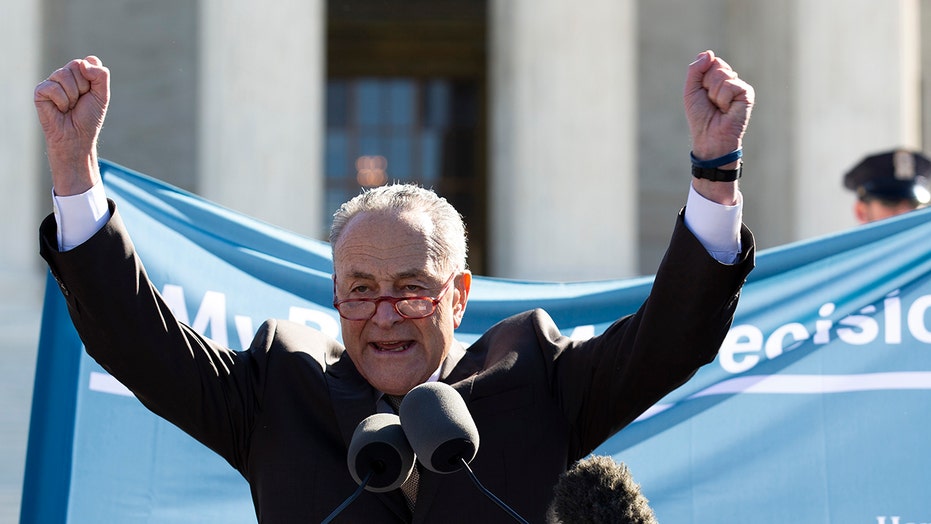 What repercussions could Schumer face for his remarks about Gorsuch and Kavanaugh?

In a Washington Post op-ed, Conway broadly condemned Schumer's comments a day earlier outside the court building. Schumer was at an abortion rally and said Justices Brett Kavanaugh and Neil Gorsuch had "released the whirlwind" and would "pay the price."

"You won't know what hit you if you go forward with these awful decisions," he said.

Conway also panned Trump's previous comments undermining members of the federal judiciary while asking Schumer and all federal officials to do better.

"Those were threats, pure and simple," Conway said of Schumer's comments, before turning to what he sees as a solution to the problem.

"It’s time to end the cycle," Conway said. "Instead of channeling Trump, and attacking the courts in ways that are as bad as or worse than the president’s, public officials who ought to know better should behave better. They can criticize judicial decisions on the merits, for their reasoning, to their hearts’ content, but they mustn’t use threatening language. They shouldn’t use judges as political battering rams. And they shouldn’t baselessly attack a judge’s integrity."

Conway continued: "Because if they do, they attack the rule of law, and, as a nation, we will all reap the whirlwind and pay the price."

"Justices know that criticism comes with the territory, but threatening statements of this sort from the highest levels of government are not only inappropriate, they are dangerous," Roberts said in a written statement. "All Members of the Court will continue to do their job, without fear or favor, from whatever quarter."

'To his credit, Schumer walked back his intemperate remarks... That’s a start, but he made no mention of the troubling statement his spokesman issued Wednesday that attacked Roberts.'

WHO ARE THE 9 SUPREME COURT JUSTICES?

Roberts rarely makes any kind of public statement, especially about politicians, but he had issued a similar rebuke to Trump after the president personally attacked a lower court judge who issued an opinion he didn't like.

Conway also acknowledged Schumer's Senate floor apology Thursday but said the senator had left out any mention of an inappropriate statement from his office on Wednesday.

"To his credit, Schumer walked back his intemperate remarks. 'I shouldn’t have used the words I did,' he said on the Senate floor Thursday," Conway wrote. "That’s a start, but he made no mention of the troubling statement his spokesman issued Wednesday that attacked Roberts: 'For Justice Roberts to follow the right wing’s deliberate misinterpretation of what Senator Schumer said, while remaining silent when President Trump attacked Justices Sotomayor and Ginsburg last week, shows Roberts does not just call balls and strikes.'"

Conway, in fact, said that Schumer's attacks against Kavanaugh and Gorsuch, which singled them out by name and included the word "you" multiple times to refer to the justices, were actually worse Trump's recent requests that two liberal justices recuse themselves in cases involving him.

"The president’s recent demands for Justices Ruth Bader Ginsburg and Sonia Sotomayor to recuse themselves in all 'Trump matters,' were, as I argued here, dumb, baseless and contemptuous of the rule of law," Conway said. "But they weren’t threatening."