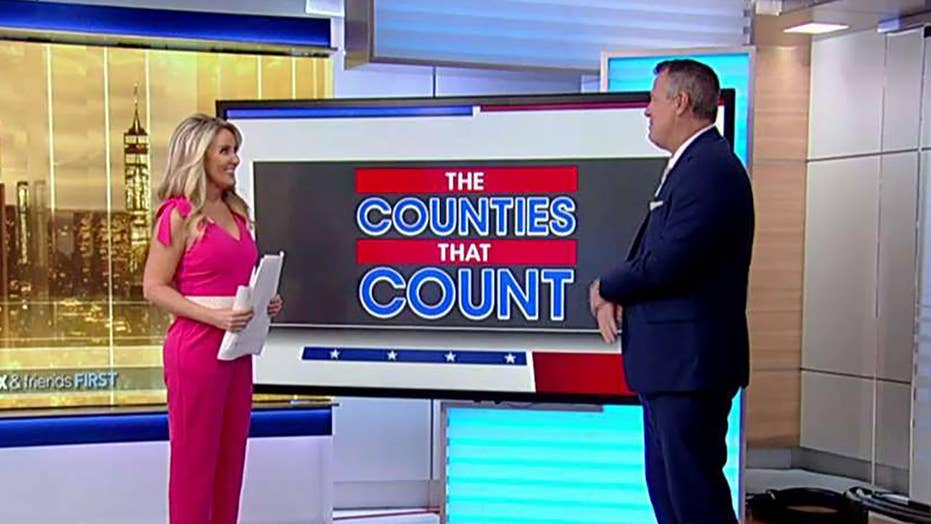 Breaking down the 10 counties that will decide the 2020 election

Trump 2020 campaign pollster Jim McLaughlin breaks down the most import counties to the presidential election.

Fifty-nine percent of voters are extremely interested in the 2020 presidential election.  That’s a number typically only seen right before an election.

It’s 27 points higher than around this same time in the last presidential cycle -- and only one point off the record 60 percent extremely interested the week before Election Day in 2008.

Joe Biden continues to perform best of the Democratic candidates tested, according to a new Fox News Poll.  He has the biggest lead over Trump (+14 points), is the only one to receive 50 percent support, and the only one to keep Trump under 40 percent (52-38 percent).  Last month, it was Biden over Trump by 50-38 percent.

Between 10-18 percent are undecided or supporting third-party candidates.

In counties where the 2016 vote was close (Hillary Clinton and Trump within 10 points), Biden is ahead by 21 points.

Among the 6 in 10 voters who feel extremely motivated about voting in 2020, Biden is up over Trump by 16 points.

Trump is preferred over Biden among whites (+2 points), whites without a college degree (+11), and white evangelical Christians (+41).

In 2016, Trump won whites by 20 points, whites without a college degree by 37 points, and white evangelical Christians by 64 points.

"Democrats are sure to be pleased their candidates have an edge over President Trump in these early trial ballots," says Republican pollster Daron Shaw, who conducts the Fox News Poll with Chris Anderson, his Democratic counterpart. "But we've got nine more months of Democratic debates and primaries, and the data show a sense among many voters that by next November, Trump will be the last one standing."

By a 6-point margin, voters predict Trump will be re-elected.  That’s a reversal from December 2018, when by 13 points voters were more likely to say he would lose.

Even some voters who are backing a Democratic candidate think Trump will win.  For instance, 16 percent of those supporting Biden in the hypothetical matchup think the president will be re-elected.  And it’s about the same for those backing Sanders (15 percent), Warren (15 percent), and Harris (14 percent).

Three candidates are running against President Trump for the GOP nomination.  It’s no contest.

Even so, more than one in four GOP primary voters (27 percent) is hoping someone new who they haven’t heard about yet will enter the race -- that includes one in five Republican primary voters who are backing Trump (21 percent).

For comparison, 38 percent of Democratic primary voters want someone new to jump into the race, including 36 percent backing Biden.

Conducted September 15-17, 2019 under the joint direction of Beacon Research (D) and Shaw & Company (R), this Fox News Poll includes interviews with 1,008 randomly chosen registered voters nationwide who spoke with live interviewers on both landlines and cellphones.  The poll has a margin of sampling error of plus or minus three percentage points for all registered voters and 5 points for Republican primary voters (341).