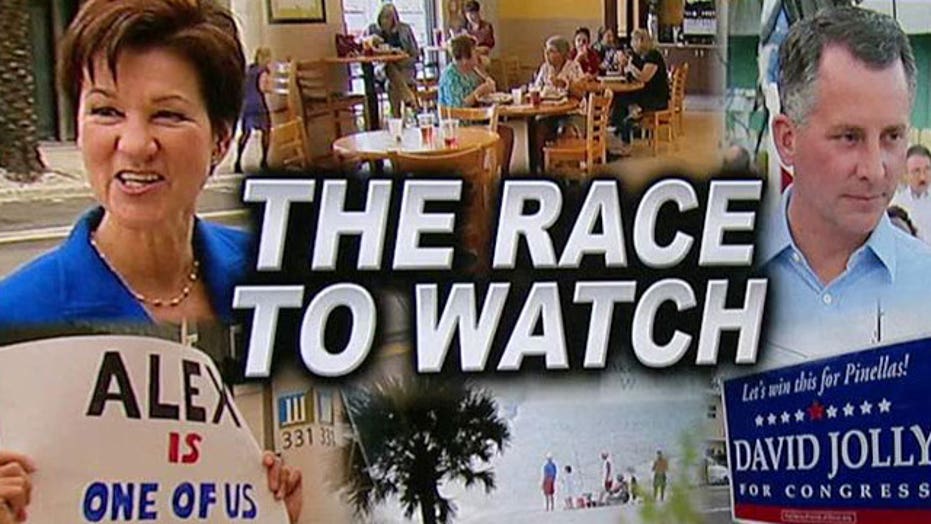 CLEARWATER, Fla. – Special elections rarely attract this much attention. But the race for Florida's 13th Congressional District is a hot one -- with so much at stake in November, what happens here is seen as a possible indicator of how the midterm elections could break.

"I think it's very important because, obviously, both parties have got their eyes focused sharply on what the ObamaCare issue does," said Susan McManus, a political science professor at the University of South Florida. "Does it push (David) Jolly, the Republican across the finish line? Or does it help (Democratic candidate Alex) Sink win?"

The election is coming up on March 11, in the race to fill the seat held for 43 years by Republican Bill Young -- who died last October.

At Frida's café in Largo, Fla., which serves up cookies adorned with the faces of political candidates, some early voters voiced fierce opposition to ObamaCare, a key issue in the race.

"I had Blue Cross, Blue Shield," small business owner Roy Badie told Fox News. "And when ObamaCare kicked in, basically I couldn't afford it. I lose coverage on my children because it was so high. So now I am paying out of my own pocket for them."

Badie said he had cast an early ballot for Jolly.

Another small business owner, Sarah Paul, is on the fence about who to vote for. A registered Republican, she's a fan of ObamaCare and recently signed herself and her husband up for coverage.

"We haven't had insurance for 28 years," Paul told Fox News. "No joke. We couldn't afford it."

The opposing opinions are a reflection of the 13th Congressional District, a purple district in a purple state. While Young represented the district for 43 years, Sink -- a Democrat -- actually carried it in her failed bid for governor in 2010.

Jolly is hoping his push to repeal ObamaCare will win over voters, mindful that he needs to propose alternatives.

"We can't just be the party of 'no.' We can't just say ObamaCare is bad. We have to have creative solutions," Jolly told Fox News.

Unlike other Democrats, Sink isn't running away from ObamaCare. In fact, she is cautiously embracing it -- while at the same time, keeping what she says is a flawed program somewhat at arm's length.

"Well, I wouldn't describe my position as having embraced ObamaCare," Sink told Fox News. "There are plenty of things that are wrong with the Affordable Care Act and let's get to work to fix them and make them work for people."

The attention being paid to this special election is unusual particularly considering it will likely have no effect on the balance of power in the House, even in November. Republicans are widely expected to retain control, no matter how things go in the 13th District.

But it is an important test in messaging for the bigger fight ahead. At last count, the Republican Party had dumped $1.7 million into the race, with Democrats at about $2 million.

McManus sees the race as almost a district-wide focus group.

"Pure and simple, message testing," McManus told Fox News. "What message can the other candidates and other states take on the road to win?"

ObamaCare isn't the only issue in this race. Rising flood insurance premiums have the potential to decimate property values in entire neighborhoods in Pinellas County. There's also Sink's status as an outsider from a neighboring district, and Jolly's past as a lobbyist, which included drumming up support for a proposal to privatize Social Security.

And Republican groups and conservative blogs are pounding Sink over comments she made about immigration reform at a candidates' forum earlier this week. Sink insisted immigration reform is important to Florida's vast tourism industry, saying: "Where are you going to get people to work to clean our hotel rooms or do our landscaping?"

Jolly declared Sink's comments "offensive" and demanded she apologize. Sink's campaign argues the quote was taken out of context and doesn't reflect her overall position on immigration reform.

Either way, it was a gaffe at a critical point in the race.

Local issues aside, the outcome of the vote will give both parties an early indication of how ObamaCare will factor into the midterm campaign. It is widely believed that if Sink -- who leads in recent polls -- loses, ObamaCare will be fertile ground on which Republicans can attack Democratic candidates, particularly in Senate races like those in Louisiana, Arkansas, North Carolina, West Virginia and Alaska.

If she wins, the calculation is a little more complex. It may be because ObamaCare is not the motivating factor Republicans believe it to be. It may be that she was simply the better-known candidate (she lost the 2010 governor's race to Scott by a single point). Or it may be because of a Democratic trend in the past two presidential elections. President Obama won Pinellas County handily in 2008 and 2012. But that included the city of St. Petersburg, which is not in the 13th District.

A Jolly loss would also give Democrats a PR victory. In the county's various congressional district iterations, a Republican held power in Pinellas County for 22 election cycles, and a Democratic pickup here would certainly give the party something to crow about.