A midterm election season that appeared quite settled Tuesday night has suddenly entered a bitterly contested overtime, with Arizona’s Senate candidates locked in a tight race and trading the lead as votes trickle in – and Florida reprising its 2000 role as the center of a ballot-counting brawl complete with armies of lawyers and allegations of local corruption.

In Arizona, Democratic candidate Kyrsten Sinema suddenly took a narrow 9,600-vote lead over GOP opponent Martha McSally late Thursday, with some 400,000 votes left to count in a closely watched race that will determine the size and influence of the Republican Senate majority in January.

That was after McSally had consistently led Sinema since Election Day, and was ahead by 17,000 votes as of early Thursday. 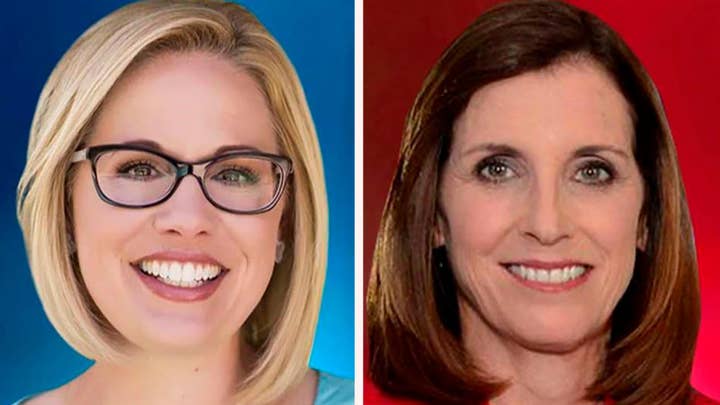 And while Georgia, too, hosts a war of words over the contested outcome of the state’s gubernatorial contest, Florida has captured the political world’s attention as both sides accuse the other of trying to “steal” the election, with an airtight Senate and gubernatorial race on the line.

In their lawsuit against Broward County, Scott and the National Republican Senatorial Committeee (NRSC) allege that officials there are hiding critical information about the number of votes cast and counted. And in a parallel suit against Palm Beach County, Scott and the NRSC charge that the election supervisor there illegally used her own judgment to determine voter intent when reviewing damaged or incorrectly filled-out absentee ballots, while refusing to allow impartial witnesses to monitor the process.

"I will not stand idly by while unethical liberals try to steal an election," Scott, who is currently Florida's governor, said at a press conference outside the Governor's Mansion, as he slammed potential "rampant fraud" in the race. 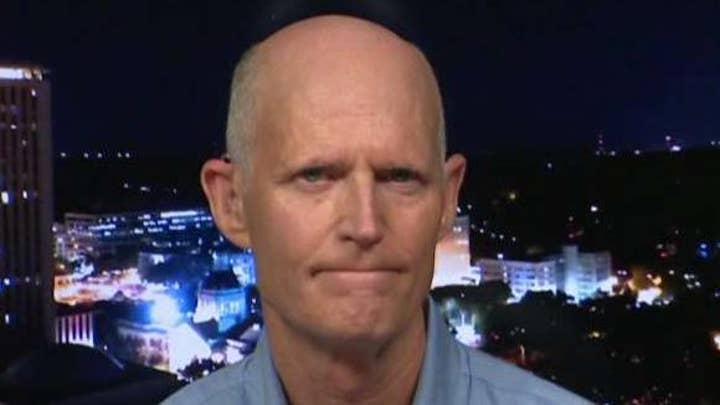 The bombshell litigation comes hours after Florida GOP Sen. Marco Rubio, in an extraordinary series of tweets that alleged incompetence if not outright complicity by Florida officials, charged that Democratic lawyers were "descending on" the state in a calculated attempt to "change the results" and "try and steal" several statewide races.

Also late Thursday, President Trump threw another wrench into the evening, announcing on Twitter that "Law Enforcement is looking into another big corruption scandal having to do with Election Fraud in #Broward and Palm Beach." He did not elaborate, but speaking to Fox News' "Hannity," Scott said he had directed a Florida law enforcement agency to probe the matter.

"So, it has been over 48 hours since the polls closed and Broward and Palm Beach Counties are still finding and counting ballots – and the Supervisors – Brenda Snipes and Susan Bucher – cannot seem to say how many ballots still exist or where these ballots came from, or where they have been," Scott said.

Meanwhile, Senate Minority Leader Chuck Schumer, D-N.Y., fired back on Twitter at Trump saying: “In a democracy, no one—not even the President—can prevent the lawful counting of votes. We will not allow him or anyone else to steal this election.”

A mandatory recount now appears imminent not only in Scott's race, but also in the agricultural commissioner contest and Florida's high-profile gubernatorial brawl between Democrat Andrew Gillum and Republican Ron DeSantis, based on new vote totals -- even though Gillum has already conceded. Florida law requires a machine recount when candidates are within 0.50 percentage points of each other.

Scott's first emergency complaint accuses Broward County Supervisor of Elections Brenda Snipes of being "unwilling to disclose records revealing how many electors voted, how many ballots have been canvassed, and how many ballots remain to be canvassed," and charges that the uncertainty "raises substantial concerns about the validity of the election process."

The NRSC specifically allege that Snipes is in violation of the Florida Constitution and the Florida Public Records Act. They demand an emergency hearing, as well as a court order requiring Snipes to turn over information about ballots in Broward County. 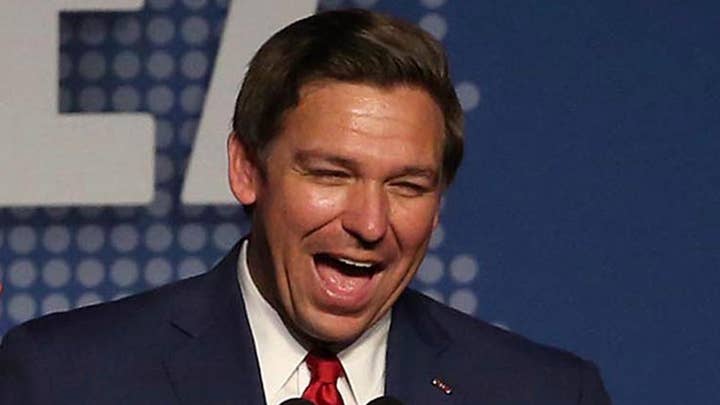 "Even more alarmingly," Scott additionally claims, Bucher "failed to allow the Palm Beach County Canvassing Board" to determine, as required by law, which damaged or improperly filled-out absentee ballots were valid and how the voters of those ballots had intended to vote. Instead, Scott and the NRSC argue, Bucher and her staff simply used their own judgment when determining voters' intent.

Rubio, in his barrage of broadsides against Snipes earlier in the day, pointed to the "slow drip" of tens of thousands of additional ballots that were reported throughout the day Thursday, most of which were favorable to several Democratic candidates. Rubio said those late disclosures violated Florida election law, which necessitates that mail-in and early voting ballots be counted within 30 minutes of polls closing.

He added Friday: "Every other county,including neighboring Miami-Dade (which had 100k more votes cast) was able to canvass,tabulate & report to state by deadline. But #Broward still hasn’t finished & won’t disclose how many ballots are left." 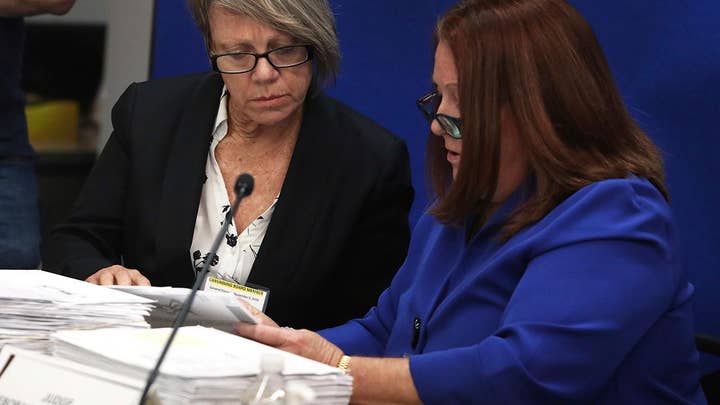 Rubio and Scott both made it clear they have no confidence in Snipes' integrity.

"A U.S. Senate seat & a statewide cabinet officer are now potentially in the hands of an elections supervisor with a history of incompetence & of blatant violations of state & federal laws," Rubio wrote, linking to a Miami Herald article describing several scandals that have gripped Broward County’s Elections Department.

Earlier this year, a judge found that Snipes had illegally destroyed ballots in a 2016 congressional contest, leading the secretary of state's office to assign election monitors to supervise her.

At his Thursday press conference, Scott outlined some of Snipes' troubled history.

"In 2016, Brenda Snipes’ office posted election results half an hour before polls closed – a violation of election law," Scott said. "That same year, her office was sued for leaving amendments off of ballots. In 2014, Brenda Snipes’ fellow Democrats accused her of individual and systemic breakdowns that made it difficult for voters to cast regular ballots. All Floridians should be concerned about that."

Vote totals in several major races in the state are changing rapidly, on an irregular schedule and sometimes late into the evening. Scott was ahead of Nelson by roughly one-fourth of one percentage point as of Thursday morning, according to The Tampa Bay Times. The paper also said the agriculture commissioner candidates were separated by only 0.06 points. That race flipped in favor of the Democratic candidate on Thursday afternoon.

In the closely watched gubernatorial race, DeSantis held a narrow 0.52-percentage-point edge over Gillum as of Thursday morning, extremely close to the 0.5 percent threshold needed to trigger a machine recount. Gillum has conceded the race, although his decision is nonbinding.

But by Thursday afternoon, unofficial figures had DeSantis up by just 38,515 votes out of the more than 8 million cast -- a lead of just 0.47 percent, low enough to trigger a mandatory recount, according to The Tallahassee Democrat. No recount has yet been announced by Florida's secretary of state; the first unofficial vote count is expected to be verified Saturday.

Bucher told Fox News that elections department staff is going through each of the 2,000 mail-in ballots, and where voter intent is determined, a worker is filling in a new ballot on behalf of the voter. Where voter intent cannot be determined, the ballot is sent to the canvassing board to undergo review.

Florida law dictates that if the margin in any race hits 0.25 percent or lower, a manual recount of any ballots set aside from the machine recount will be ordered -- reminiscent of the scene in the 2000 presidential election, when the country was gripped by images of poll workers counting votes deciphering hanging chads by hand.