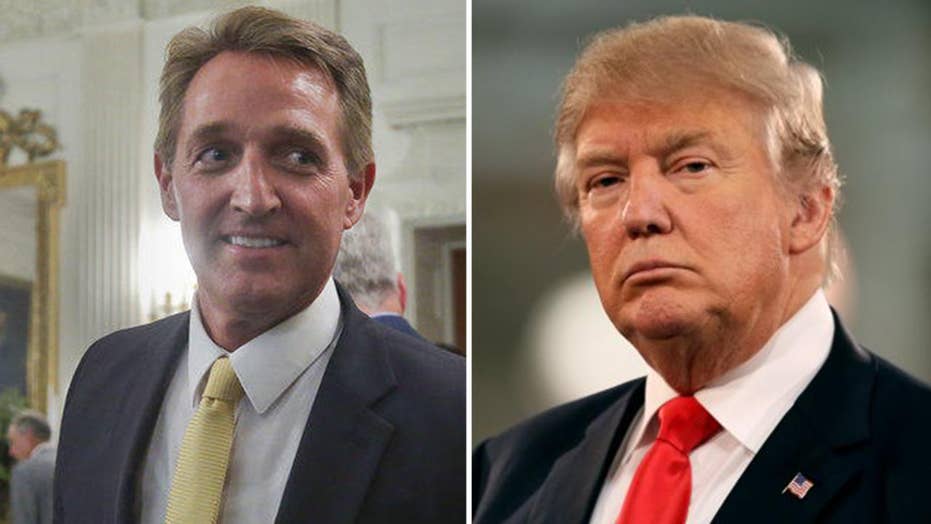 Dan Bongino sounds off on the Republican senator's remarks and reacts to reports that he will use the comparison in an upcoming speech.

Sen. Jeff Flake, R-Ariz., will make a speech scheduled for Wednesday where he will compare President Trump’s concerns of media objectivity to similar comments made by communist dictator Joseph Stalin.

Flake, a fervent critic of the Trump administration, is set to give the speech the same day Trump is expected to announce the winners of the so-called “fake news” awards.

The senator will use his speech to condemn Trump’s attacks on the press and for calling it “the enemy of the American people.”

In the draft of the speech, obtained by The Washington Post, Flake will then compare Trump’s comments to statements made by Stalin, who is responsible for the murder of millions.

“It is a testament to the condition of our democracy that our own president uses words infamously spoken by Josef Stalin to describe his enemies,” the senator is expected to say, according to the excerpts published by the Post.

“It bears noting that so fraught with malice was the phrase ‘enemy of the people,’ that even Nikita Khrushchev forbade its use, telling the Soviet Communist Party that the phrase had been introduced by Stalin for the purpose of ‘annihilating such individuals’ who disagreed with the supreme leader.”

According to the outgoing senator’s speech excerpts, Trump “has it precisely backward — despotism is the enemy of the people,” adding that “When a figure in power reflexively calls any press that doesn’t suit him ‘fake news,’ it is that person who should be the figure of suspicion, not the press.”

The relationship between Flake and Trump has been soured from the start. During the 2016 presidential election, Trump said Flake is “a very weak and ineffective Senator.” Last summer, the commander-in-chief praised his Republican challenger Kelli Ward, adding that the Arizona senator “is weak on borders, crime and a non-factor in Senate. He's toxic!”

Flake announced his resignation in October with a scathing attack on the president, calling his behavior “reckless, outrageous, and undignified."

He also criticized the Republican Party that, in his view, had “given in or given up on the core principles in favor of a more viscerally satisfying anger and resentment,” adding that “anger and resentment are not a governing philosophy."