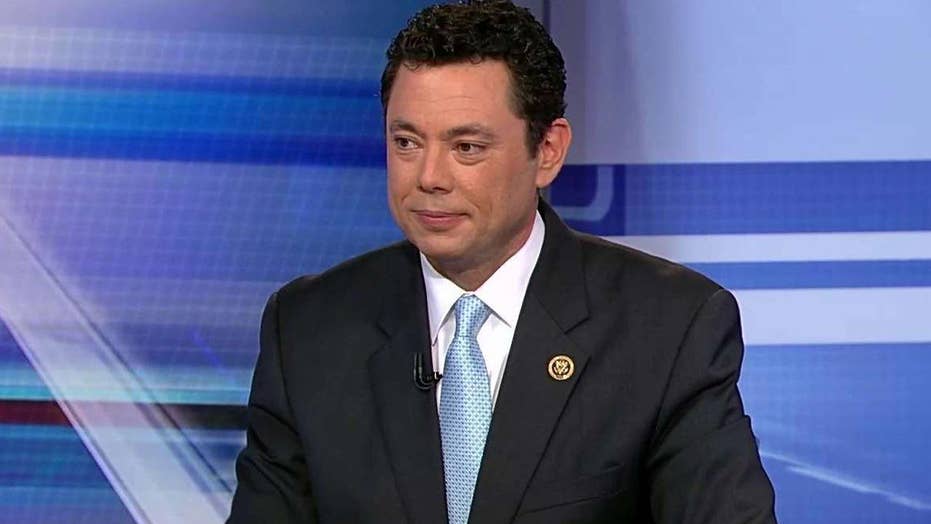 No confidence in Obama admin in visa vetting

Rep. Jason Chaffetz goes ' On the Record' on feds admitting Obama administration can't be sure of whereabouts of foreigners who had their visas revoked over terror concerns and on needed changes in visa screening

The Obama administration cannot be sure of the whereabouts of thousands of foreigners in the U.S. who had their visas revoked over terror concerns and other reasons, a State Department official acknowledged Thursday.

The admission, made at a House oversight hearing examining immigrant vetting in the wake of major terror attacks, drew a sharp rebuke from the committee chairman.

“You don’t have a clue do you?” Rep. Jason Chaffetz, R-Utah, told Michele Thoren Bond, assistant secretary for the Bureau of Consular Affairs.

But Chaffetz quickly pried at that stat, pressing the witness about the present location of those individuals.

The startling admission came as members of the committee pressed administration officials on what safeguards are in place to reduce the risk from would-be extremists.

At issue is how closely the U.S. government examines the background of people seeking entry to the country, including reviews of their social media postings.

Leon Rodriguez, director of U.S. Citizenship and Immigration Services, told committee members that such checks aren't being done in an abundant manner, and he was not specific about when or how it would occur.

Lawmakers are trying to ascertain which safeguards are in place to ensure that extremists are not exploiting a variety of legal paths to travel to the United States.

One of the San Bernardino, Calif., shooters came to the U.S. on a K-1 fiancee visa last year despite the fact that the FBI believed she was already radicalized.

Tashfeen Malik came to the U.S. on a K-1 fiance visa in July 2014 and passed multiple background checks and at least two in-person interviews, one in Pakistan and another after she married Syed Farook. FBI Director James Comey has said Malik and Farook communicated privately online about jihad and martyrdom before they married.

Lawmakers at times angrily pressed officials on why even public social media wouldn't routinely be looked at for vetting those trying to enter the country.

"If half the employers are doing it in the United States of America, if colleges are doing it for students, why wouldn't Homeland Security do it?" said Rep. Stephen Lynch, D-Mass. "We don't even look at their public stuff, that's what kills me."

"There is less there that is actually of screening value than you would expect, at least in small early samples, some things seem more ambiguous than clear," Rodriguez told lawmakers Thursday. He said foreign alphabets frequently used in social media posts were a challenge to translate.

"We all continue to believe there's a potential for there to be information of screening value ... particularly in high risk environments," he added.

Both DHS and the State Department are reviewing the process for vetting visa applications, including the K-1 program, and have been directed by the White House to create specific recommendations for improvements.

DHS is specifically reviewing policies on when authorities at U.S. Citizenship and Immigration Services can look at social media posts as part of the process for evaluating applications for certain visas.

"There are some legal limits to what we can do," Homeland Security Secretary Jeh Johnson said Wednesday. He added that he thinks reviews of social media should be done more often, but did not provide specifics.

During his opening remarks Chaffetz, said: "It is unclear how someone who so openly discussed her hatred of our country and way of life could easily pass three background checks. We need to understand how the breakdown happened with Malik and what we are doing to make sure it doesn't happen again."

Lawmakers have also pressed for changes to the Visa Waiver Program, which allows many citizens from 38 countries to travel to the United States without being subjected to the in-person interview required to receive a visa. Many fear that foreign fighters who carry western passports will be able to exploit that system to travel freely to the United States.

Earlier this month the House voted overwhelmingly to tighten controls on that program and require visas for anyone who has been to Iraq or Syria in the last five years. Security changes to the program were also included in the Senate version of a massive spending bill expected to be approved later this week.