Judicial Watch president Tom Fitton reacts to the release of the Bruce Ohr 302s on 'Hannity.'

The partially redacted documents, first obtained by Judicial Watch, also revealed that top Justice Department official Bruce Ohr maintained contact with Steele for at least six months after Steele was fired by the FBI for unauthorized media contacts in November 2016. The records further confirmed that Ohr knew of Steele's anti-Trump bias before the 2016 election.

"This is just the tip of the iceberg," Senate Judiciary Committee Chairman Lindsey Graham, R-S.C., told Fox News' "Hannity" Thursday evening. "I know personally there's a lot more out there."

The summaries of FBI interviews with Ohr, known as 302s, indicated that Ohr knew by September 2016 -- a month before the initial FISA application to surveil the Trump campaign -- that an individual with links to the dossier was "desperate that Donald Trump not get elected and was passionate about him not being the U.S. President.”

Sen. Graham on Ohr 302s: This is just the tip of the iceberg

Sen. Lindsey Graham reacts to Ohr 302s that reveal the FBI was warned about red flags with Steele's work.

"Ohr believes [redacted] wanted to blunt or foil the Kremlin's plans," the FBI document continued, while recounting claims pushed by Fusion GPS, the opposition research firm behind the dossier that was funded by the Hillary Clinton campaign and Democratic National Committee (DNC).

A source close to the matter told Fox News that "this had the effect of putting a senior DOJ official on notice that a witness/source had an extreme bias."

In 2018, the GOP-led House Intelligence Committee released a memo asserting Steele had told Ohr he was "desperate" for Trump to lose the election.

Just nine days before the FBI applied for its FISA warrant, bureau officials were battling with a senior Justice Department official who had "continued concerns" about the "possible bias" of a source pivotal to the application, according to internal FBI text messages previously obtained by Fox News.

And Fox News has confirmed that a senior State Department official, Kathleen Kavalec, met with Steele and documented his political motivations in writing prior to the FISA warrant approval -- particularly that Steele's client was "keen" to see his anti-Trump materials "come to light" prior to the election. Kavelec forwarded her written notes, in which she also pointed out that some of Steele's claims were apparently false, to a senior FBI executive.

Nevertheless, the FISA warrant application went through in October 2016 with multiple renewals.  While the FISA records are heavily redacted, it does not appear that the FBI's documentation about Steele's bias was ever shared with the FISA court.

Proceedings before FISA courts are ex parte, meaning defendants are not aware of them or able to attend in any capacity. The FBI has a legal and procedural obligation to reveal exculpatory evidence to the FISA court on its own.

However, on four occasions, the FBI told the FISA court that it "did not believe" Steele was the direct source for a Yahoo News article written by Michael Isikoff implicating former Trump campaign foreign policy adviser Carter Page in alleged collusion with Russian officials. 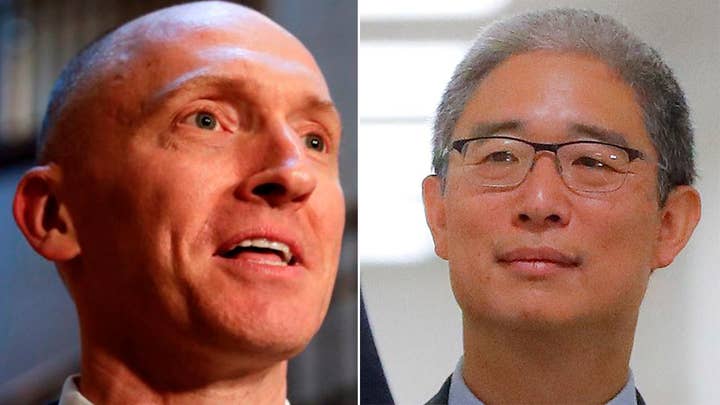 While FBI told the FISA court that the Yahoo article constituted independent evidence to support Steele's claims, the 302s showed that by November 2016 -- before several FISA warrant renewals -- the FBI had made the connection between Steele and the Yahoo News article.

According to the FBI documents, Ohr apparently met with Steele in Washington, D.C. in late September, "possibly close to the time when the Yahoo news article was published on September 23, 2016."

The FBI materials indicate that Glenn Simpson, the co-founder of Fusion GPS, and Steele "could have met with Yahoo or Michael Isikoff jointly, but Ohr does not know if they did.".

It is not clear from the interviews whether Ohr made the connection between Steele and the Yahoo article, or the interviewing agents did.

London court records have shown that contrary to the FBI's assessments, Steele briefed Yahoo News and other reporters in the fall of 2016 at the direction of Fusion GPS.

The 22 pages of reports on interviews with Ohr also revealed his extensive contacts with Steele. The two communicated on the encrypted messaging app "WhatsApp," according to the records.

"On January 27, 2017, Ohr received a WhatsApp notification from Christopher Steele indicating [redacted] and Steele would like to keep the line of communication open with Ohr for future contact. Ohr replied in the affirmative," the documents state.

"This is just the tip of the iceberg."

Curiously, Ohr also told the FBI that he thought "Russian oligarchs will provide information to the FBI because in Russia everyone talks to the police."

The FBI documents showed Ohr's contacts with Steele extended through May 2017, when Special Counsel Robert Mueller was appointed. Ohr then became a kind of backchannel linking Steele to the FBI after his termination.

House Oversight Committee ranking member Jim Jordan, R-Ohio, told Fox News' "Hannity" late Thursday: "Why do you terminate your direct relationship with Christopher Steele and then encourage a top Justice Department official to keep meeting with him, and then coming and briefing you about each of those meetings and conversations?"

"Seems to me you're trying to hide something when you do that," Jordan continued, adding that the 302s showed that some at the bureau were seeking to take out Trump.

In November 2016, Ohr said that “reporting on Trump’s ties to Russia [was] going to the Clinton Campaign, Jon Winer at the U.S. State Department and the FBI.”

And in December 2016, Simpson gave Ohr a thumb drive with Fusion GPS research, according to the documents, and said former Trump attorney Michael Cohen may have visited Prague.

Mueller was unable to substantiate the incendiary claim in the dossier that Cohen traveled to Prague as part of a conspiracy with Russian hackers.

Numerous other problems with the Steele dossier's reliability have surfaced, including that Mueller also was unable to substantiate the dossier's claims that Page had received a large payment relating to the sale of a share of Rosneft, a Russian oil giant.

Ohio Rep. Jim Jordan reacts to release of 302s and evidence of an extensive backchannel between Steele and the DOJ.

The dossier's claims that Russia was running a disinformation campaign through its nonexistent consulate in Miami also proved unfounded.

Even so, the dossier was repeatedly cited by both the FBI and media reports as a primary reason to continue investigating the Trump team's ties with Russia.

All the while, Ohr, Steele, and the FBI remained connected. On Dec. 20, 2016, the documents show, Ohr gave the FBI opposition research conducted by his wife Nellie Ohr at Fusion GPS, “which contained the totality” of her efforts -- “but the Fusion GPS header was stripped.”

Simpson has been accused of giving "extremely misleading" testimony to Congress concerning the dossier during closed-door remarks in August 2017.

“This new Bruce Ohr FBI 302s show an unprecedented and irregular effort by the FBI, DOJ, and State Department to dig up dirt on President Trump using the conflicted Bruce Ohr, his wife, and the Clinton/DNC spies at Fusion GPS,” Judicial Watch President Tom Fitton said in a statement.

“The FISA courts weren’t informed of this corrupted process when they were asked to approve and reapprove extraordinary spy warrants targeting President Trump," Fitton added.