A top Republican senator is accusing the founder of opposition research firm Fusion GPS of providing testimony that was “extremely misleading, if not an outright lie,” regarding the anti-Trump dossier.

Fusion GPS founder Glenn Simpson was asked about his firm’s work on the dossier during closed-door testimony in August 2017. When asked specifically whether that work continued after the 2016 election, Simpson responded: “I had no client after the election.”

Senate Judiciary Committee Chairman Chuck Grassley, R-Iowa, however, challenged that answer in a new letter to committee colleague Sen. Christopher Coons, D-Del. “As we now know, that was extremely misleading, if not an outright lie,” he wrote.

He said that, “Contrary to Mr. Simpson’s denial in the staff interview, according to the FBI and others, Fusion actually did continue Trump dossier work for a new client after the election.” 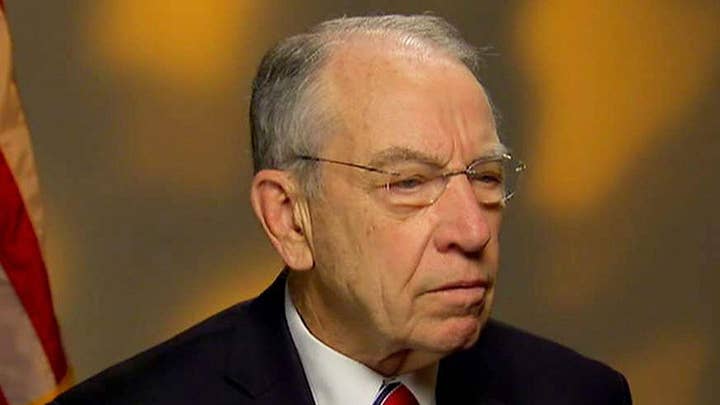 The letter cites the House Intelligence Committee’s Republican-authored Russia report, which included a footnote detailing a March 2017 interview between the FBI and Daniel J. Jones, a former staffer for Democratic Sen. Dianne Feinstein. According to the footnote, Jones told agents he was leading a research organization called the Penn Quarter Group, which had “secured the services” of dossier author and former British spy Christopher Steele; an associate; and Fusion GPS “to continue exposing Russian interference” after the election.

The committee report said that the Penn Quarter Group “was being funded by 7 to 10 wealthy donors located primarily in New York and California, who provided approximately $50 million.” Grassley noted that Jones said his group planned to “push the information he obtained from Fusion and Steele to policymakers on Capitol Hill, the press, and the FBI.”

Jones, according to his LinkedIn profile, worked four years for the FBI doing “international analysis” and as a staffer for Feinstein. Feinstein, who is the ranking Democrat on the Judiciary committee, unilaterally released a transcript of Simpson’s testimony in January.

Grassley said Simpson and Jones’ statements are subject to the federal statute 18 USC 1001, which bars lying to federal investigators. “So, despite the fact Mr. Simpson said he had no client after the election, he in fact did, and that client revealed himself to the FBI,” he wrote.

Grassley, working with Sen. Lindsey Graham, R-S.C., back in January sent a criminal referral on Steele to the Justice Department – claiming the ex-spy lied about his contact with the media regarding allegations against members of the Trump campaign. “As with the circumstances surrounding the Steele referral, we once again have two seemingly contradictory statements in contexts where material lies are criminal. I would welcome your views on what actions you are willing to take with regard to Mr. Simpson’s testimony,” Grassley wrote. 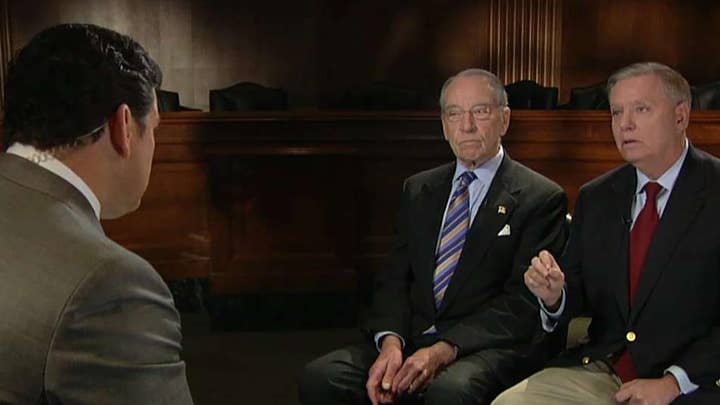 Grassley wrote the letter in response to Coons’ concerns about potential inconsistencies in Donald Trump Jr.’s committee interview. Grassley countered with his own concerns.

Separately, as reported by Fox News, after much legal wrangling on both sides of the Atlantic, Steele is expected to sit down for a videotaped deposition on June 18 in London for civil litigation filed against Buzzfeed, which published the unverified Steele memos in January 2017. The Steele-written memos were funded by the Democratic National Committee and Hillary Clinton through Washington, D.C.-based law firm Perkins Coie, which hired Fusion GPS for $1.8 million. The unverified information was also used by the FBI and pushed to various journalists during the 2016 campaign.

Evan Fray-Witzer, the Boston-based lawyer for Russian technology executive Aleksej Gubarev, who is suing Buzzfeed for defamation of his companies, said in a statement: “We look forward to asking both Mr. Steele and Mr. Simpson about the work they performed after the election, which is when the memo concerning our clients was written. Obviously, if the work was performed for the Penn Quarter Group, it’s just more evidence that this was paid-for, private opposition research and not – as Buzzfeed tries to portray it – some sort of ‘government investigation.’”

There was no immediate response from Simpson’s attorney or Daniel Jones.

Making materially false or fraudulent statements to Congress can be pushishable by fines and imprisonment of up to eight years in prison.