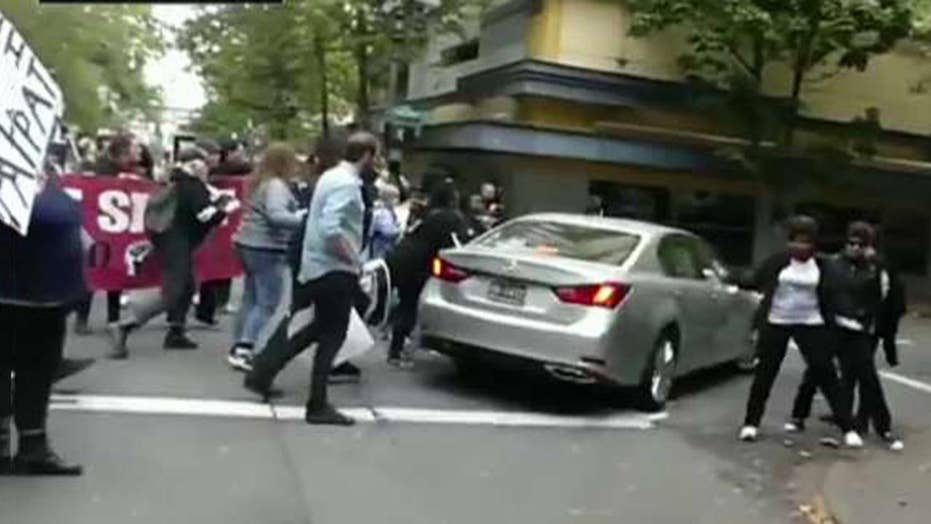 After raucous applause, Holder, who served in the Obama administration from 2009 to 2015, added: "That's what this new Democratic Party is about."

Holder clarified later: "When I say 'kick 'em,' I don't mean do anything inappropriate, don't do anything illegal. But we've got to be tough. And we've got to fight for the very things that John Lewis, Martin Luther King, Whitney Young, all those folks gave to us. That stuff can be taken away. That's what they want to do."

Michelle Obama had used the conciliatory line "When they go low, we go high" in her address to the 2016 Democratic National Convention to draw a contrast to then-candidate Donald Trump's rhetoric.

President Trump has sought to characterize mob tactics as a hallmark of modern progressivism, in the wake of comments by Rep. Maxine Waters, D-Calif., encouraging protesters to confront and "push back on" his Cabinet members in public places. Trump has mockingly called Waters a "leader" of the Democratic Party, even as he said her IQ hovers in the mid-60s.

In his off-the-cuff remarks Sunday, Holder criticized what he called Republican efforts to "racially gerrymander" districts in response to seeing "people of color populat[ing] the suburbs of Atlanta. "They have used the power they have gotten for all the wrong things. They want to keep themselves in power," he said. 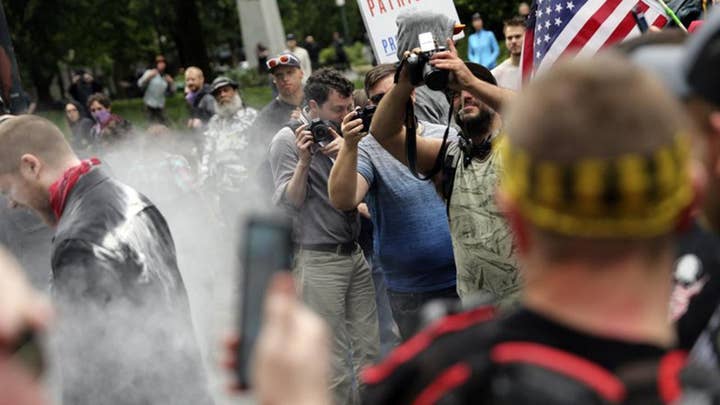 RAND PAUL: 'I FEAR THERE'S GOING TO BE AN ASSASSINATION' SOON IN D.C. BECAUSE OF HATEFUL RHETORIC

The former attorney general is considered a potential 2020 presidential candidate, and he has said he will make a final decision on running early next year.

His fiery remarks came as former Secretary of State Hillary Clinton told CNN in an interview Tuesday, “You cannot be civil with a political party that wants to destroy what you stand for, what you care about."

“That’s why I believe, if we are fortunate enough to win back the House and/or the Senate, that’s when civility can start again," Clinton told CNN's Christiane Amanpour. "But until then, the only thing Republicans seem to recognize and respect is strength.”

"The Senate and the nation will not be intimidated."

"The far-left mob is not letting up. Earlier today, former Secretary of State Clinton sent this signal as clear as day," McConnell said. "She told CNN exactly how she views millions of Americans who hold different political views from her own."

"No peace until they get their way?" McConnell continued, quoting Clinton's comments. "More of these unhinged tactics? Apparently, this is the left's rallying cry. But fortunately, the American people know that the fact-free politics of hate, fear and intimidation are not how we actually govern in our democratic republic. ... The Senate and the nation will not be intimidated."

For her part, White House adviser Kellyanne Conway told Fox News that Clinton's remarks "dangerous." They came after video footage showed Sen. Ted Cruz, R-Tx., being chased out of a restaurant with his wife by anti-Kavanaugh protesters.

Meanwhile, Sen. Rand Paul, R-Ky., warned in an interview on Tuesday that partisan rhetoric in D.C. -- which reached a heightened pitch in the wake of the confirmation of Associate Supreme Court Justice Brett Kavanaugh -- has the potential to turn deadly soon.

"I fear that there's going to be an assassination," Paul told a Kentucky radio show. "I really worry that somebody is going to be killed, and that those who are ratcheting up the conversation ... they have to realize they bear some responsibility if this elevates to violence."

Paul's wife, Kelley, revealed in a Breitbart News interview on Friday that she sleeps with a "loaded gun by my bed," has updated her home's security system and has "deadbolts all around my house." Kelley also wrote an op-ed published by CNN in which she called on Sen. Cory Booker, D-N.J., to tone down his rhetoric; in June, Booker suggested his supporters “get up in the face of congresspeople.”

The Kentucky senator reiterated his wife's criticism on Tuesday. "When people like Cory Booker say get up in their face ... What he doesn't realize is that for every 1,000 persons who want to get up in your face, one of them is going to be unstable enough to commit violence," Paul said. 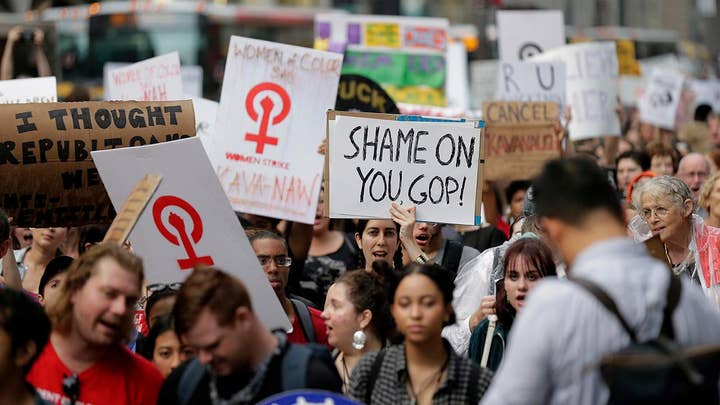 Last week, Paul was chased and verbally harassed by anti-Kavanaugh activists at Washington's Reagan National Airport. And last fall, Paul was attacked and beaten in his yard in Kentucky by his neighbor -- an episode that a Kentucky Democrat joked about earlier this year.

"When I was at the ballfield and Steve Scalise was nearly killed, the guy shooting up the ballfield, and shooting I think five or six people, he was yelling, 'This is for health care,'" Paul told host Leland Conway on Tuesday. "When I was attacked in my yard and had six of my ribs broken, and pneumonia, lung contusion, all that -- these are people that are unstable, we don't want to encourage them."