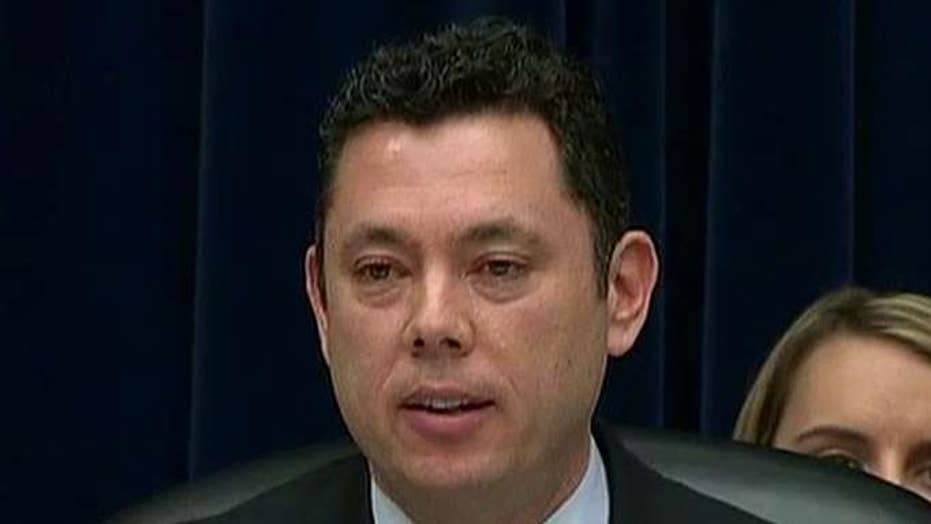 Michigan and federal officials traded charges Wednesday over who is to blame for the water crisis in Flint, Mich., at a heated House hearing where government agencies at all levels were accused of ignoring the city's plight.

“This is a failing at every level,” House Oversight Committee Chairman Jason Chaffetz, R-Utah, said. “The public has a right to be outraged. Outrage doesn’t even begin to cover it.”

The House committee hearing was the first to examine the crisis over Flint's lead-contaminated water. Passions were high, with resident LeeAnne Walters saying the EPA sat by "in silence" as her son was getting lead poisoning.

But Joel Beauvais, acting water chief for the U.S. Environmental Protection Agency, said Michigan officials failed to heed federal warnings about the crisis and delayed for months telling the public about the health risks of lead-contaminated water.

Keith Creagh, director of the Michigan Department of Environmental Quality, argued that all levels of government deserve blame and not just officials on the state level.

Creagh also acknowledged Michigan should have required the city of Flint to treat its water for corrosion-causing elements after elevated lead levels were discovered in the city's water a year ago. State officials "relied on technical compliance [with the law] instead of assuring safe drinking water," Creagh said, calling the move a “mistake.”

But he said the EPA "did not display the sense of urgency that the situation demanded," allowing the problem to fester for months.

In an aggressive line of questioning, Maryland Democratic Rep. Elijah Cummings, ranking member of the committee, demanded Michigan Gov. Rick Snyder be called before Congress to answer questions about the crisis as well.

“Our ultimate goal must be to serve the interest of the children and families of Flint,” Cummings said.

Flint is under a public health emergency after its drinking water became tainted when the city switched from the Detroit system and began drawing from the Flint River in April 2014 to save money. The city was under state management at the time.

Water was not properly treated to keep lead from pipes from leaching into the supply. Some children's blood has tested positive for lead, a potent neurotoxin linked to learning disabilities, lower IQ and behavioral problems.

Snyder has apologized repeatedly for the state's role in the crisis. Snyder and state legislators have enacted $28 million in emergency Flint funding for the current fiscal year. Snyder is expected to propose an additional $30 million in state funding to help Flint residents pay their water bills.

The crisis has taken on partisan overtones, as Democrats blame the Republican governor and some Republicans target the federal Environmental Protection Agency for failing to intervene sooner.

All levels of government deserve blame in the Flint crisis, Creagh said.

City officials did not follow proper protocol in conducting lead sampling of homes and the EPA "did not display the sense of urgency that the situation demanded," Creagh told the House committee.

"What happened in Flint was avoidable and never should have happened," said Beauvais.

EPA's regional staff urged Michigan officials "to address the lack of corrosion control, but was met with resistance," Beauvais said. State delays in responding to the lead crisis "and in informing the public of ongoing health risks raise very serious concerns," he said.

"We have also failed their most basic trust," Lawrence said. While Lawrence applauded Wednesday's hearing, she and other Democrat renewed their call for Snyder and other state officials to testify. The oversight panel's Republican majority did not call Snyder to testify Wednesday.

Chaffetz also fumed that former Flint emergency manager Darnell Earley declined to show up for the hearing. The oversight committee issued a subpoena to Earley on Tuesday, but his lawyer refused service, a committee staffer said.

Chaffetz said refusing to attend was not an option, and called on the U.S. Marshals to track him down.

Creagh, in his testimony, focused on a June 2015 memo by an employee in EPA's Midwest regional office that outlined problems with Flint's water. The memo was not formally delivered to state environmental officials until November -- after the state had begun taking actions to address the lead problem, Creagh said.

"Legitimate concerns raised by EPA's own expert staff were not elevated or provided to either the city or the state for review and action until after the state's response was well underway," Creagh said.

While immediate treatment of the water was not required after lead was first discovered in January 2015, "corrosion treatment should have been required by the MDEQ," said Creagh, who took over as head of the state agency last month following the resignation of Dan Wyant.

In the Senate, Democrats have proposed a $600 million package of federal aid for Flint, but face opposition from some Republicans who don't want to add to the federal deficit. Democrats hoped to include the package in a bipartisan energy bill.