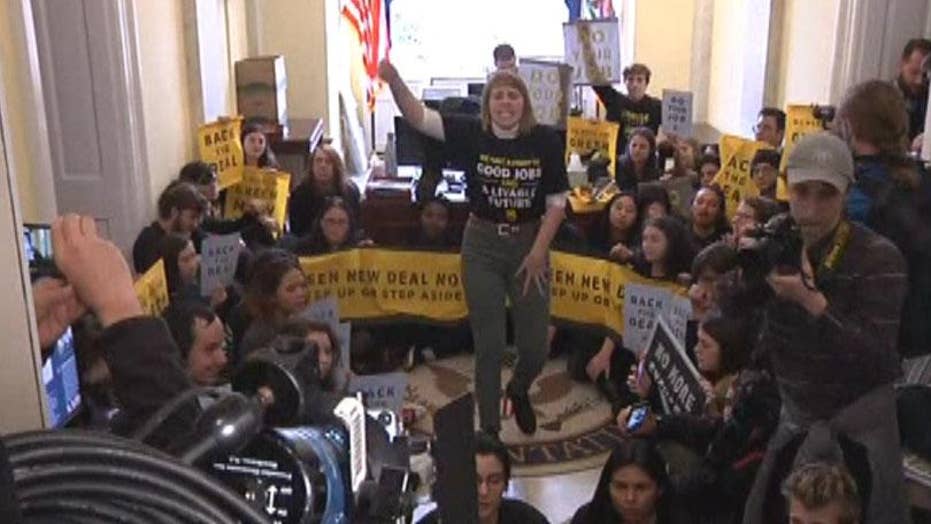 Hundreds of young demonstrators turned out Monday on Capitol Hill to push Democrats on a package of ambitious environmental goals — including a nationwide transition to 100-percent power from renewable sources within as little as 10 years — that’s been dubbed the Green New Deal.

The Green New Deal deliberately omits details on how to reorient the United States toward the drastic carbon-emissions reductions it demands, instead calling for a select committee in the House to devise a plan by 2020. That timetable is designed to rally Democrats behind a climate-change strategy as they’re picking a nominee to take on President Trump, who has rolled back multiple environmental regulations and cast doubt on the scientific consensus that human activity is driving global warming.

Organizers with the Sunrise Movement activist group have framed their approach as a make-or-break issue for Democratic voters, particularly young voters.

However, they’re fighting recent history on that point. Other issues dominated the debate during the 2016 Democratic presidential primary, and climate change barely registered during the 2016 general election.

Stephen O’Hanlon, a spokesman for the Sunrise Movement, said, “Any senators or any other politician who wants the votes of young people in 2020 needs to back a Green New Deal that would transform our economy and create millions of new jobs stopping climate change.”

“What’s your plan?” read signs held up by protesters. Others said, “Do your job” and “No more excuses.”

The plan, named for the New Deal that reshaped America under former President Franklin D. Roosevelt, envisions a costly and dramatically remodeled U.S. energy infrastructure as soon as 2030. It’s a shift from where Democrats laid down their symbolic markers on climate change as recently as last year.

Protesters seen holding placards during the Sunrise Movement protest to advocate that Democrats support the Green New Deal, at the US Capitol.  (Michael Brochstein/SOPA Images via ZUMA Wire)

Some opponents have cast the goals as idealistic and politically risky.

Sarah Dolan, communications director for the conservative opposition research group America Rising, warned that Democratic presidential hopefuls’ “race to the left” on climate change, as well as on health care, minimum wage and immigration, would backfire in 2020.

“Being the first to take the most progressive position of the day will only lead to a party that can’t compete in the general election as it becomes unrecognizable to independent voters,” she said.