Welcome to Fox News’ Election Brief, a newsletter with the latest updates from the 2022 midterm elections and 2024 campaign trail. Subscribe now to get Fox News' Election Brief in your inbox.

NEVER MISS A MOMENT — Check out our latest race calls and balance of power updates at Fox News' election center.

SLOW AS A SNAIL: Republicans have the House. Democrats will keep the Senate. But results from midterms elections continue to trickle in two weeks past Election Day, with four critical House races in Alaska, California and Colorado still uncalled. Fox News Digital breaks down the outstanding races and what is taking so long. Read more from Fox News' Brandon Gillespie and Sophia Slacik: Here is where the last uncalled House races stand two weeks from Election Day

WHAT HAPPENS IN VEGAS: Florida Gov. Ron DeSantis highlighted his landslide re-election victory and his conservative crusade against what he calls "woke ideology" in an energetic speech that brought a crowd of leading Republican activists and donors to their feet numerous times. DeSantis, who at age 44 is 32 years younger than former President Donald Trump, won his first election as governor in 2018 thanks to a major assist from the then-president. But he’s become a force of his own as he’s built a political brand that stretches from coast to coast. Read more from Fox News' Paul Steinhauser: Ron DeSantis receives multiple standing ovations at first major GOP 2024 presidential cattle call

LEARNIN' THE BLUES: House Democrats suffered defeat in the 2022 midterm elections, and, in January, after two years of having unified control in the House and Senate, the party will pass control of the lower chamber back to Republicans. Now, one day after it was projected that the GOP would take control of the House when the 118th Congress convenes next year, Americans are pondering how Democrats lost control after months of preparation and preaching about issues they believed fared best with voters. Read more from Fox News' Kyle Morris here: Democrats' policies, economic issues led to losing House majority, political insiders say

BATTLE FOR THE SENATE: While Democrats pulled off a better than expected night on Nov. 8th, the party will face tremendous headwinds in maintaining their razor-thin Senate majority come 2024. Democrats will be defending 23 of the 34 Senate seats up for grabs next cycle. Of their 23 seats up for election, seven are in states won by former President Donald Trump in either 2016 or 2020. Opportunities for Democrats to flip Republican-held seats are less encouraging. Sen. Rick Scott of Florida is considered one of Democrats' best pickup opportunities in 2024, along with Republican Sen. Ted Cruz's Texas seat. Both senators won by narrow margins in 2018. Read more from Fox News' Sophia Slacik: The 2024 Senate battle has begun and the electoral map does not favor Democrats

CRUZ PLAYS COY: He’s repeatedly flirted with making another run for the White House, but Sen. Ted Cruz said on Saturday that he’s running for re-election to the Senate in 2024. But Cruz, taking questions from reporters at the Republican Jewish Coalition’s annual leadership conference in Las Vegas, Nevada, did not rule out the possibility of a presidential campaign. Read more from Fox News' Paul Steinhauser here: 2024 Watch: Cruz says he's running for Senate re-election but doesn't rule out presidential run 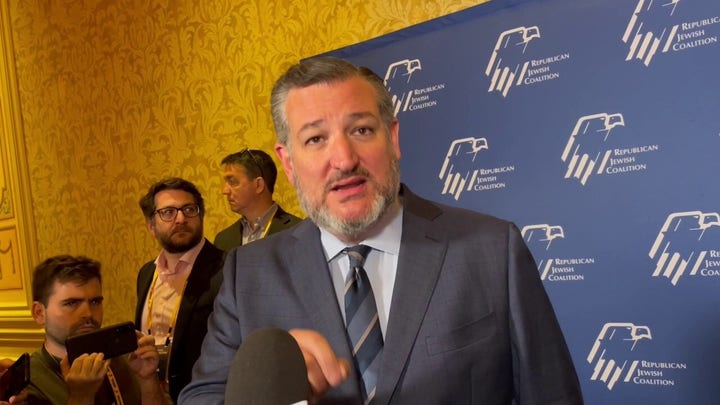 PRESIDENTIAL POLL: A Marist Poll national survey conducted after the 2022 midterm elections found the majority of voters — Republicans, Democrats and independents leaning toward one of the parties — believe their party would have a better chance at securing the presidency in 2024 if President Biden and former President Trump are not nominees. According to the poll, 52% of Republicans said the GOP would have a better chance of winning the next presidential election if someone other than Trump is the nominee, while 37% still believe Trump is the best candidate for the job. About 11% where undecided. Read more from Fox News' Aubrie Spady: 2024 POLL: Most Dem and GOP voters think they have a better chance at presidency without Biden or Trump 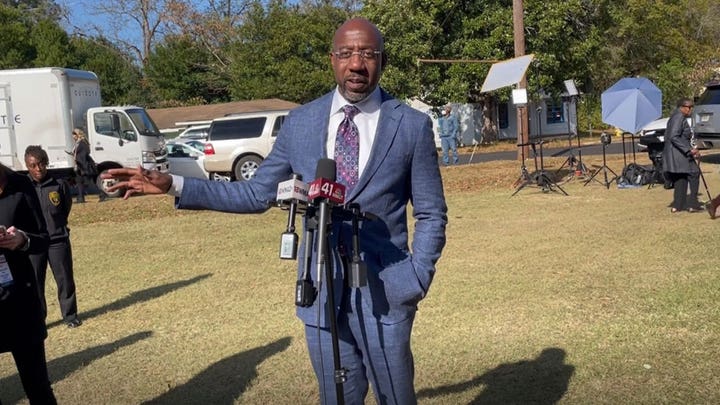 Incumbent Democratic Sen. Raphael Warnock hit back at his Republican challenger, Herschel Walker, this week over accusations he wants to change Georgia's voting rules in the midst of campaigning for the Dec. 6 runoff election. Speaking with Fox News Digital during a press gaggle following a Thursday campaign rally in Fort Valley, Georgia, Warnock dismissed Walker's criticism and defended the lawsuit he filed alongside the Democratic Senatorial Campaign Committee on Monday to move the start of early voting for the runoff to the Saturday after Thanksgiving rather than the following Monday. Read more from Fox News' Brandon Gillespie: WATCH: Warnock responds to allegations he wants last minute change to runoff voting rules

EYES ON OHIO: Sen. Sherrod Brown is considered one of the most vulnerable Democratic Senators up for election in 2024, and Republicans already have their eyes on unseating the long-time Ohio Democrat. Republican state Sen. Matt Dolan — who was a candidate in the GOP U.S. Senate primary last May — is seriously considering a re-run for the Senate nomination in 2024. Read more from Fox News' Paul Steinhauser and Sophia Slacik: Republicans set their sights on unseating longtime Ohio Democrat Sen. Sherrod Brown

Stay up to date on the latest election news by subscribing to Fox News' Election Brief.