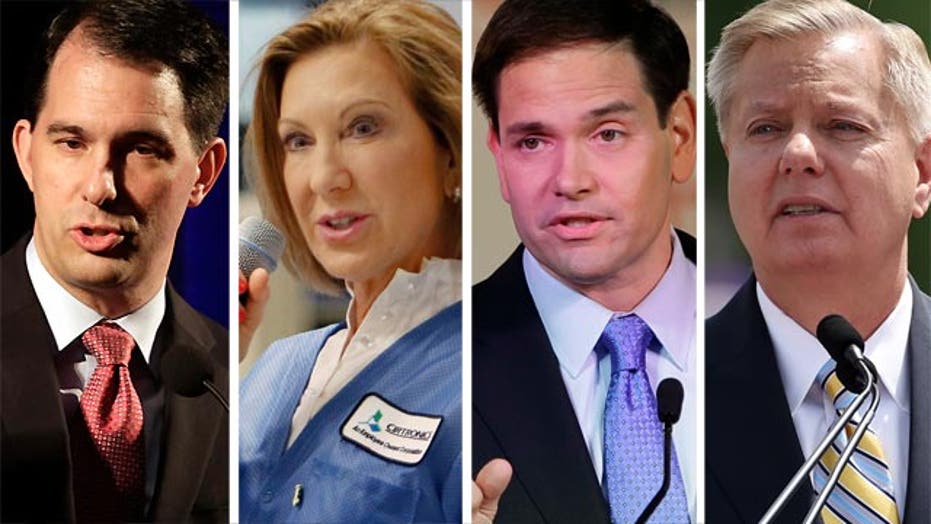 GOP hopefuls in a competition for campaign cash at E2 Summit

PARK CITY, Utah – Govs. Scott Walker and Chris Christie said presidential rivals in the Senate don't do anything. Sen. Marco Rubio denounced "old ways" in an indirect slap at older contenders. Sen. Lindsey Graham said his party may be going down a "death spiral" if it doesn't embrace minority and younger voters.

In elbowing for attention Friday at a luxury mountainside donor retreat convened by 2012 Republican nominee Mitt Romney, several 2016 contenders let loose some elbows at each other. Most did not name names, but Christie did.

"If you want to know how little they know," he said of senators, "watch what Rand Paul has done the last two weeks."

The existing and prospective presidential candidates employed some unusually blunt rhetoric in drawing contrasts with each other as they addressed the donors and activists.

Asked why senators seem to be popular as presidential candidates, Christie said, "Because they don't have to do anything."

"If you don't have to do anything you can be as popular as you like because you can say anything," the New Jersey governor went on. He then took his swing at Paul, the Kentucky senator who did not attend, for his tactics in the Senate that delayed and helped to reshape government surveillance programs.

Both Graham and another potential candidate, Ohio Gov. John Kasich, said the eventual nominee must get on board with an immigration overhaul or risk losing the presidency.

"Nobody is going to vote for a party that's going to break their family apart," Graham said. The South Carolina senator said the party's lost ground with minorities and younger voters means a "demographic death spiral."

Kasich also urged Republicans to accommodate many of the immigrants who are living in the country illegally. "They've been God-fearing, hard-working people in many cases," he said.

They were among the 2016 contenders pitching for the support of about 300 top political donors and strategists connected to Romney. Former technology executive Carly Fiorina is on Saturday's schedule — after a morning skeet-shooting session led by Graham.

Even while calling for a civilized Republican debate, Walker charged that GOP senators seeking the White House haven't accomplished anything in Washington.

He said his party's 2016 presidential class should be divided into two groups. "There are fighters and there are winners," the Wisconsin governor said, describing the fighters as the senators in the race.

"They have yet to win anything and accomplish anything."

Rubio did not engage Walker but drew a sharp contrast between the older and younger crop of candidates.

"Some have said I should have waited my turn," Rubio said. "I didn't know there was a line."

Bush was invited to Romney's gathering, but was in Europe on Friday.

Some attendees started their day hiking with Romney and his wife at 6 a.m. Others played flag football with Rubio. Among other activities: a hot air balloon ride, outdoor yoga and horseback riding with Ann Romney.