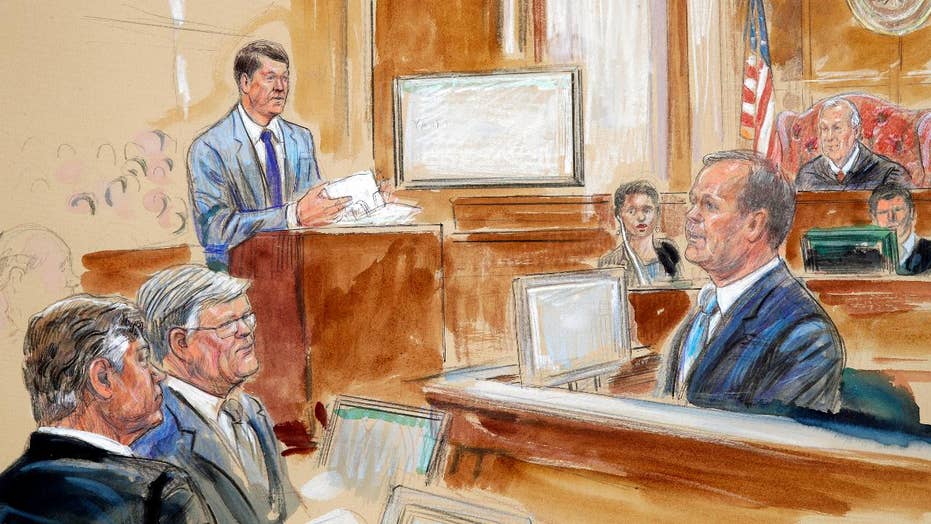 Rick Gates has finished three days' worth of dramatic testimony in federal court against his former business partner, ex-Trump campaign chairman Paul Manafort -- but not before defense lawyers caused a stir by pressing him for details on his past infidelity.

A day earlier, Gates acknowledged having a single extramarital relationship in London while working for Manafort.

But on Wednesday, Manafort attorney Kevin Downing seemed to accuse Gates of having affairs with multiple individuals, asking Gates whether he disclosed four affairs to the special counsel’s office. The question was part of an apparent bid to catch Gates in a lie, after he testified that his plea agreement would be in jeopardy if he didn’t tell the truth on the stand.

Prosecutor Greg Andres, though, swiftly objected to the question before Gates could answer. And the witness never did.

But at another point Wednesday, Gates attempted to express remorse from the stand, saying “I’ve made many mistakes over many years.”

The judge in the case, U.S. District Judge T.S. Ellis III, cut off Gates, saying, “this isn’t the time for that.”

Testimony returned later Wednesday to allegedly false financial statements filed by Manafort with federal authorities and banks. IRS agent Michael Welch testified Wednesday afternoon that Manafort should have "marked the box" indicating on his tax filings that he had foreign accounts, and said none of Manafort's payments to vendors from those accounts were reported to the IRS.

"He controlled the money," Welch said, adding that Manafort had made "false" claims to the IRS that certain income was actually from a loan, perhaps to reduce his taxable income.

Magionos acknowledged that nothing was done to verify that the documents in fact contained Manafort's signature, and admitted that the signatures looked "a little different, but I’m not an expert" on that topic.

For the previous two days in court, Gates has testified that he and Manafort committed bank and tax fraud together.

Gates testified Tuesday that in 2016 Manafort requested a profit-and-loss statement for his firm to be converted from a PDF file to the Microsoft Word format, which could be edited more easily. According to Gates' testimony, Manafort then altered the statement to change a $638,000 loss to a multimillion-dollar profit -- and Gates sent it on to a bank to obtain a loan.

Both Manafort and Gates were indicted last year on charges of bank and tax fraud as part of Special Counsel Robert Mueller’s probe. Prosecutors dropped charges against Gates after the former business partner took a plea deal and agreed to cooperate with prosecutors.

During cross-examination on Tuesday, the defense painted Gates as living a “secret life” in London and accused him of embezzling money from Manafort’s foreign accounts at center of the trial to indulge in an extramarital affair in the United Kingdom.

“I’ve acknowledged there was a period where I had another relationship,” said Gates, who is married.

In an aggressive cross-examination on Tuesday, Manafort’s lead attorney Downing said to Gates: “You stole from Mr. Manafort.”

Downing accused Gates of lying on expense reports to make trips to London and around Europe.

Gates admitted during testimony on Monday to embezzling money from Manafort. But on Tuesday, he denied using that money to finance his extramarital relationship, saying he used “bonus money” and “family money.”

The questioning is part of the Manafort defense strategy of presenting Gates to the jury as someone who lies and cannot be trusted.

Downing summed up his questioning by asking Gates: "After all these lies, and the fraud you have committed, you expect this jury to believe you?"

"I am here to tell the truth and to take responsibility for my actions. Mr. Manafort had the same path,” Gates said. “I am here. I have accepted responsibility and I am trying to change.”

Fox News' Jake Gibson, Serafin Gomez and Gregg Re contributed to this report.