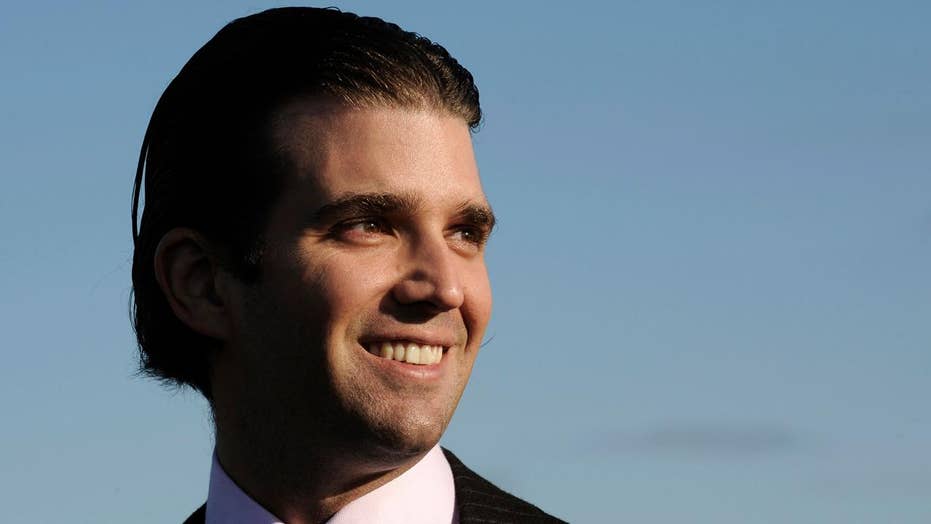 Donald Trump Jr. on Monday used a sarcastic tweet to mock The New York Times’ reporting on a meeting he and other Trump associates had last summer with a Russian lawyer who supposedly lured them with the hint of Hillary Clinton dirt.

“Obviously I'm the first person on a campaign to ever take a meeting to hear info about an opponent... went nowhere but had to listen,” the president’s son tweeted.

The reports, though, were causing new headaches for the Trump family with regard to congressional investigations, as a senior Republican on the Senate Intelligence Committee said Monday the panel should now question Trump's eldest son.

Sen. Susan Collins of Maine told reporters that "our intelligence committee needs to interview him and others who attended the meeting" as part of the panel's probe into Russian interference in last year's election and possible collusion between Russian officials and the Trump campaign.

The Times has published a series of reports on the meeting with lawyer Natalia Veselnitskaya, leading to varying explanations from the Trump team. Trump’s eldest son initially said it was primarily about allowing Americans to adopt Russian children and “mentioned nothing about Mrs. Clinton.”

He later acknowledged he was told the Russian individual “might have information helpful to the campaign.”

During the meeting, Trump Jr. said in a statement, “the woman stated that she had information that individuals connected to Russia were funding the Democratic National Committee and supporting Ms. Clinton.” But he said her statements “were vague, ambiguous and made no sense” and it “became clear that she had no meaningful information.”

He said, “She then changed subjects and began discussing the adoption of Russian children and mentioned the Magnitsky Act. It became clear to me that this was the true agenda all along and that the claims of potentially helpful information were a pretext for the meeting.”

The meeting with Veselnitskaya was also attended by Paul J. Manafort, Trump’s campaign chairman at the time, and Trump’s son-in-law, Jared Kushner, according to The Times.

“No inconsistency in statements, meeting ended up being primarily about adoptions. In response to further Q's I simply provided more details,” he tweeted.

The reports could pose new complications for Trump associates and family members, though, as the president has sought to downplay any suggestion of coordination during the campaign with the Russians.

Mark Corallo, a spokesman for President Trump’s outside legal team, reportedly said, “The president was not aware of and did not attend the meeting."

The Associated Press also reported Monday that a music publicist says he set up the meeting on behalf of a client in Moscow named Emin Agalarov.

In a statement to The Associated Press on Monday, Rob Goldstone said the lawyer said she had information about purported illegal campaign contributions to the Democratic National Committee that she thought Donald Trump Jr. might find helpful.

Goldstone says Trump Jr. agreed to squeeze the meeting into a tight schedule. Trump appeared in a music video with Agalarov in 2013. The video was filmed while Trump was in Russia for the Miss Universe pageant.