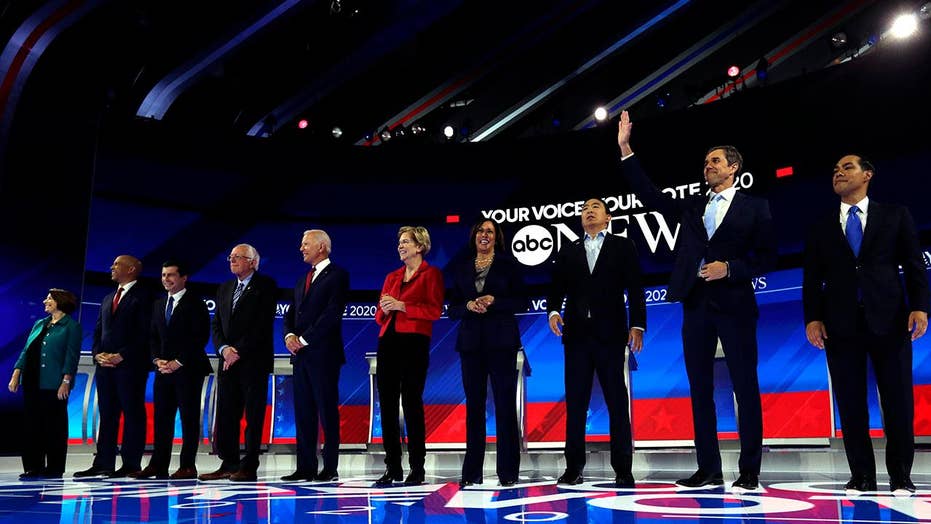 But, the upping of polling and donor thresholds – more modest than the doubling of the criteria from July’s second round to this month’s third round – may not significantly winnow the field of White House contenders still standing after October’s debate.

The DNC announced on Monday that to qualify for the November showdown, candidates must reach at least 3 percent in four approved national or early-voting-state polls. That’s up from the 2 percent needed to reach the stage at the September and October debates and up from the 1 percent needed in three approved surveys for the June and July debates.

OCTOBER DEMOCRATIC PRIMARY DEBATE TO BE HELD IN OHIO

But, to tamper down any criticism from the early voting states, the DNC added another way to satisfy the polling criteria – reaching 5 percent in two qualifying surveys in Iowa, New Hampshire, Nevada or South Carolina – the first four states to vote in the nominating calendar.

The window for the polling is from Sept. 13 to seven days before the still-unannounced November debate. In previous debates, candidates had until two weeks before the showdown to reach the polling criteria.

The other threshold – fundraising – also saw a slight raising of the bar. To make the cut, candidates will have to receive campaign contributions from 165,000 individual donors. That’s up from 130,000 for the September and October debates and from 65,000 for the first two rounds of showdowns. Candidates also will have to receive 600 unique contributions from each of 20 states, the District of Columbia or U.S. territories.

The DNC’s faced criticism over its thresholds for months from many of the lower and middle-tier candidates, who argued that the criteria forced them to concentrate on boosting donor contributions at the expense of retail politicking in the early voting states. And, some activists and party leaders in the early voting states have also criticized the DNC for winnowing the record field of candidates – which topped off at roughly two-dozen contenders this summer – before voters actually got to vote in the primaries and caucuses starting this coming February.

"The DNC is using polling to winnow the field even further, when it's voters and caucus-goers who should be determining our nominee," said Shannon Beckham, a spokeswoman for Colorado Sen. Michael Bennet's presidential campaign.

And, Galia Slayen, a spokeswoman for Montana Gov. Steve Bullock, told Fox News that "as the DNC continues to make the rules up as they go along, Governor Bullock will remain focused on bringing his message of a fair shot for every American directly to voters on the ground."

Both Bennet and Bullock were on the debate stage in July for the third round but failed to qualify for this month's showdown and it appears unlikely either will make the cut for October's debate.

The new thresholds shouldn’t be much of a problem for many of the leading contenders – such as former Vice President Joe Biden, Sens. Elizabeth Warren of Massachusetts, Bernie Sanders of Vermont and Kamala Harris of California, as well as South Bend, Ind., Mayor Pete Buttigieg.

Some of the other six candidates likely to make the October debate are not sure bets to qualify for November’s showdown. That group consists of Sens. Cory Booker of New Jersey and Amy Klobuchar of Minnesota, former Rep. Beto O'Rourke of Texas and tech entrepreneur Andrew Yang.

As he has in the past, Yang praised the DNC, tweeting, "Kudos to the DNC for raising the thresholds in a fair and transparent manner as well."

Some of the candidates, including Booker and Buttigieg, quickly used news of the new thresholds to reach out to supporters with fundraising emails.

Former Housing and Urban Development Secretary Julián Castro and billionaire philanthropist and environmental and progressive advocate Tom Steyer – who've also made the cut for October’s showdown – have yet to hit 3 percent in any polls since the November qualifying period kicked off earlier this month. And, Rep. Tulsi Gabbard of Hawaii, who's just one poll away from making the October debate, also has yet to reach 3 percent in any approved surveys.

A new qualifying poll – a Monmouth University survey in New Hampshire – is set for release on Tuesday.