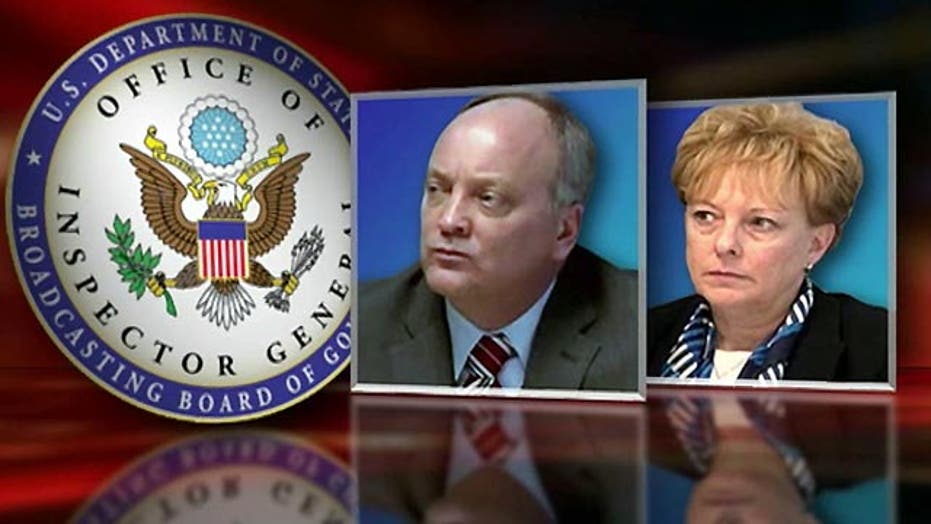 Two top officials at the State Department's Diplomatic Security Service (DS) -- the federal law enforcement agency that protects American diplomats and investigates allegations of criminal misconduct by State Department employees -- gave sworn testimony earlier this year that appears to be evasive at best, and untrue at worst, according to evidence obtained by Fox News.

The officials are Scott Bultrowicz, who until Feb. 1 served as director of DS, and Tracy H. Mahaffey, who remains the executive director of DS. In videotaped depositions conducted this past February, Bultrowicz claimed not to know about any claims by a federal agency that DS officials have failed to follow proper procedures; and Mahaffey claimed not to know about any pending investigations into DS.

Yet Fox News has obtained meeting notes, draft reports and other evidence that suggest both officials were aware, at the time they were deposed, of a pending investigation into DS and its operations by the State Department's Office of Inspector General (OIG). What's more, both officials had been apprised of the OIG's preliminary finding that DS did indeed fail to follow proper procedures in at least eight cases, and possibly more, because of "undue influence" and "pressure" brought to bear by senior State Department officials to halt internal investigations.

The evidence indicates the two officials were presented with those conclusions approximately 60 days before they testified in their depositions.

Lawyers and experts contacted by Fox News said the implications could be staggering for a federal law enforcement agency whose officers frequently testify in criminal prosecutions if two of its top officials were deemed to have testified untruthfully in sworn proceedings.

The two officials' testimony was taken as part of discovery proceedings in a little-known lawsuit that has been snaking its way through the courts and various administrative venues for several years. DS agent Rick Higbie, a 15-year veteran of the force presently detailed to the U.S. attorney's office in Dallas, is suing Hillary Clinton in her official capacity as former secretary of state, on the grounds that DS sought to demote Higbie after he declined -- citing the chronic and terminal illness of his daughter -- to serve in overseas assignments. The State Department rejects Higbie's claims and the trial is slated to commence in Texas in October.

Bultrowicz and Mahaffey were deposed on Feb. 21 in Arlington, Va. Gregory B. Starr, a former director of DS who returned to the job on Feb. 1, succeeding Bultrowicz, was also deposed on Feb. 21, at the State Department's main office building in Washington. All three depositions were videotaped.

During the proceedings, Higbie's lawyer, Cary Schulman of Dallas, engaged in the following colloquy with Bultrowicz:

SCHULMAN: Are you aware of any governmental agency, the United States Congress, or any other governmental investigative body that has similar criticisms of Diplomatic Security's failure to have or follow through proper administrative policy or procedures?

BULTROWICZ: None that come to my mind right now.

Earlier, Schulman had engaged in a similar exchange with Mahaffey:

SCHULMAN: Are you aware of any investigations by any agency, federal government or otherwise, into Diplomatic Security, into whether they uniformly or properly administer their policies in connection with employees or the administration of diplomatic security?

MAHAFFEY: I'm not aware of any.

Yet Fox News has obtained contemporaneous notes taken at a meeting that was held on Dec. 14, 2012 -- at which both Bultrowicz and Mahaffey were present -- that was convened to review the draft OIG report on DS operations dated Dec. 10. Also present was then-Assistant Secretary of State Eric Boswell and representatives from the OIG team that had spent several months scrutinizing DS' operations before preparing the draft report.

At the Dec. 14 session, the meeting notes make clear, the attendees discussed the preliminary findings of the OIG investigation into the practices and conduct of DS. These findings included the very first of the "key judgments" presented: "The Bureau of Diplomatic Security (DS) Special Investigations Division (SID), which investigates allegations of criminal and administrative misconduct, lacks a firewall to preclude the DS and Department of State (Department) hierarchies from exercising undue influence in particular cases."

The draft also stated, as its third "key judgment": "DS does not have adequate quality assurance measures to be able to ascertain on a regular basis that adequate internal safeguards and management procedures exist to ensure investigations comport with law enforcement standards."

Finally, in the body of the draft, OIG stated: "The OIG team heard of instances where senior DS officials may have improperly influenced investigations. The team was also advised that high-level Department officials may have once or twice a year brought pressure to bear to improperly halt or influence investigations, including into allegations of serious criminal conduct."

The meeting notes -- taken by a member of the OIG investigation team -- state that "nobody in the room actually said the report language is not accurate." However, Boswell, whose bureau oversees DS, reacted forcefully to the draft, telling the OIG team that the finding about the lack of a "firewall" would "damage DS" and be used by "every defense lawyer around."

In the end, the judgments about the lack of a "firewall" and "quality assurance measures" stayed in the OIG's final report, issued in March of this year -- but the finding that high-level State Department officials may have interfered with DS cases "once or twice a year" was stricken from it.

Since Bultrowicz and Mahaffey were both present for the contentious Dec. 14 meeting -- approximately 60 days prior to their depositions -- Higbie's lawyer has questioned how Bultrowicz could maintain in the sworn proceeding that he was unaware of any "governmental agency" or "governmental investigative body" having lodged criticism of DS for failure to follow proper procedure.

Likewise, Higbie's lawyer has questioned Mahaffey's testimony that she was "not aware" of any investigations into DS by "any agency, federal government of otherwise." State Department officials, speaking on background, told Fox News that Mahaffey was making a distinction between an "investigation" and an "inspection," which is the technical term of art applied to OIG's scrutiny of DS operations.

Former U.N. ambassador John Bolton, whose professional experience includes the practice of law and a stint as an under secretary of state, said the testimony appeared designed not to acknowledge the existence of the problems cited by the OIG investigating team.

"I think perjury is certainly one explanation," he told Fox News. "It undercuts the credibility of the entire agency, in this case the Diplomatic Security Bureau. And it undercuts the testimony of other DS agents that they might have to provide, in other law enforcement matters. ... It really goes to the legitimacy of the entire bureau and unfortunately calls into question the investigations that it's undertaking."

In the landmark ruling Giglio v. United States (1972), the U.S. Supreme Court held that among the potentially exculpatory material prosecutors are required to turn over to defendants and their lawyers is information affecting the credibility of government witnesses. Attorneys contacted by Fox News suggested that the DS disclosures could prompt defense attorneys to challenge prosecutions launched, and convictions already obtained, on the strength of DS agents' testimony.

That DS itself, as an agency, could wind up "Giglio-impaired" -- the term used to describe testimony by a law enforcement officer that is ruled inadmissible because prosecutors have not shared with the defense relevant information damaging to the officer's credibility -- would appear to be precisely the concern that Boswell raised in the December meeting, when he fretted that the OIG findings would be used by "every defense lawyer around."

"If there is an allegation of misconduct, of which I'm not aware of for those two individuals, we would certainly take a look at that, as we would in any case," she told reporters. "But you're also referring to a few lines, as I understand it, from a multi-hour closed door deposition, which I have -- is likely taken out of context."

The formal name of the Texas case is Richard Higbie v. Hillary Rodham Clinton (acting in her official capacity as Secretary of State) [Civil Action No. 3-11-CV-2636-L].