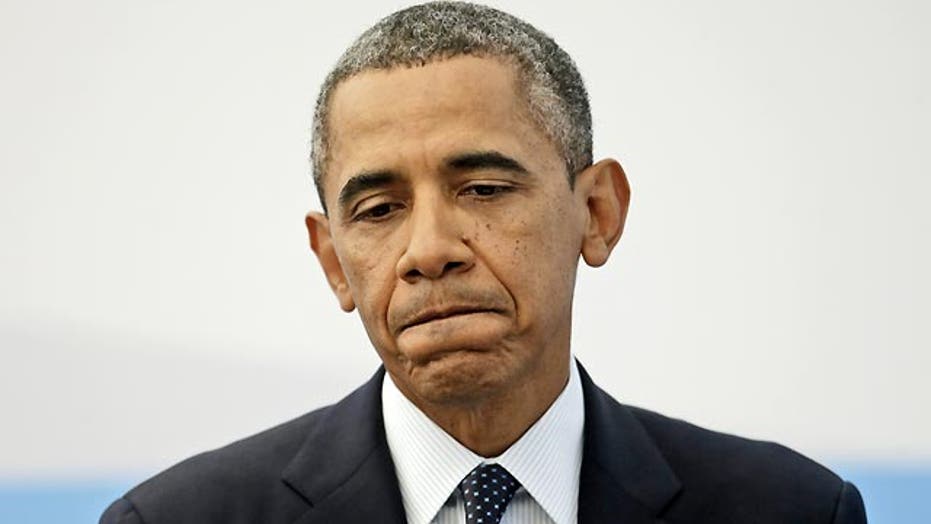 ** Want FOX News First in your inbox every day? Sign up here. **

DEMS IN DISARRAY OVER SYRIA
While President Obama is plenty busy in Russia today trying to build international support for his call to strike Syria, he’s been doing some long distance diplomacy back home as members of his own party recoil from his call to arms. Obama called senators to drum up support for military action. The White House has also ditched a scheduled presidential trip to Los Angeles next week in order to keep selling in Washington. Obama heads home today, but Secretary of State John Kerry picks up the ball overseas, departing for Lithuania this morning for coalition building after a series of confrontations with Congress. With Republicans uneasy about the overall strategy, a crumbling Democratic coalition poses problems for the president’s plan.

Start the clock - Obama will arrive in Washington with the clock running on an authorization vote in the Senate set for next week. And while the administration is starting to increase its outreach effort (the White House has launched an Internet site in support), hawks are growing increasingly concerned that Obama cannot deliver his own party at the critical moment. The administration has also enlisted Vice President Joe Biden to make the sale with restive Democrats.

[WaPo is tracking where Congress stands on the issue. The current whip count for authorizing a strike in the Senate: 24 against, 23 in favor, 53 undecided. In the House: 105 against, 24 in favor, 142 undecided.]

“…[W]hip counts are overwhelmingly against already, there's no reason to try to use any procedure. The House doesn't want it, the American people don't want it.” – Rep. Alan Grayson, D-Fla. talking to reporters after a closed-door briefing on Syria

[WSJ’s Kimberly Strassel: “The press is obsessed with the Republican reaction to Mr. Obama's resolution. But the party facing the biggest split over the vote -- and whose actions will have the greatest ramifications for the presidency -- is Mr. Obama's.]

Moderate Dems call for delay - Sens. Joe Manchin D-W.Va., and Heidi Heitkamp, D-N.D., have proposed a resolution delaying the immediate use of force compelling the president to build more international and domestic support. “Given the case that has been presented to me, I believe that a military strike against Syria at this time is the wrong course of action,” Manchin said in a statement.

Obama pushing gay rights in Russia - “[President Obama] is rhetorically waving the gay-rights flag on his visit to Russia,” the Daily Caller reports, “…even as he is working to soften or bypass opposition from Russia’s president to a strike on Syria…[Obama will] take time to meet with Russian gay rights groups.” [Ed. note: It may not play in St. Petersburg, but the president’s gay-rights stand will help with the liberal base at home.]

[Noonan: “A great nation cannot go to war—and that's what a strike on Syria, a sovereign nation, is, an act of war—without some rough unity as to the rightness of the decision. Widespread public opposition is in itself reason not to go forward.]

BAIER TRACKS: ORGANIZING FOR INACTION ON SYRIA…
“It appears the administration is more worried about losing liberals than conservatives on the Syria vote (although initial head counts don't look great on either side).  Thursday night, Secretary of State John Kerry appeared on Chris Hayes' show on MSNBC making the case.  Friday, U.S. Ambassador to the U.N. Samantha Power, will speak at the Center for American Progress, the liberal think tank started by John Podesta.

There are already rumors on Capitol Hill that the administration isn't too fond of the broad language amended into the resolution by Sens. John McCain, R-Ariz., and Chris Coons, D-Del., -- so much so that administration officials may try to get that language dropped with further amendments brought up by supporters. Looking at all of that, you could easily come to the conclusion that the administration is making a full-court press to shore up liberal votes, correct?

Well, you could read it that way. But strangely, President Obama’s former campaign, Organizing for Action, is missing in action. The group has been mobilized to defend the president’s health law as well as his tax plans, his proposed immigration overhaul and other agenda items. But on arguably the biggest issue for this president -- one where his second term agenda may hang in the balance -- nada, zilch, zip from OFA.

According to a transcript obtained by Fox News, in his weekly call with grassroots supporters, OFA Executive Director Jon Carson said of Syria, ‘We don't always actively organize around every issue and the debate in Congress over the Syria vote is not one that OFA is planning on organizing around.’

So, if you hear more pundits questioning the administration's commitment to get this vote across the goal line - ‘OFA on the bench’ is one of the reasons why.” – Bret Baier.

What vetting? - Washington Examiner’s Byron York catalogues growing unease about the radical elements among Syrian rebel forces: “In Washington, use of the word ‘vetting’ is usually confined to unknown political candidates and cabinet nominees. So what is this vetting in Syria everyone is talking about? Is the U.S. government requiring opposition fighters to fill out questionnaires? Show photo ID? Hand over bank statements and tax returns?”

Vote of no confidence - “I am still and always will be in my heart a United States Marine.  There is nothing I want more than to support my commander-in-chief when he draws a red line. … But since he drew that line, since [Secretary of State John Kerry] came out, he has done nothing but mess this up, and he has lost my confidence.”—Rep. Michael Grimm, R-N.Y., “On the Record with Greta Van Susteren” Click here for Gretawire.

Syria shadows in Virginia race - Virginia Republican Gubernatorial candidate Ken Cuccinelli announced his opposition to a U.S. strike on Syria. Cuccinelli’s announcement came after Democrat Terry McAuliffe told reporters he does not have a position on whether Congress should authorize strikes.

[New at Fox News Opinion: Former Chairman of the House Permanent Select Committee on Intelligence Pete Hoekstra’s We cannot strike Syria with the best of intentions and no long-term strategy]

INTERCEPTED: IRAN’S REVENGE INTENTIONS
WSJ: “The U.S. has intercepted an order from Iran to Shiite militants in Iraq to attack the U.S. Embassy and other American interests in Baghdad in the event of a strike on Syria. … U.S. officials said they are on alert for Iran's fleet of small, fast boats in the Persian Gulf, where American warships are positioned. U.S. officials also fear Hezbollah could attack the U.S. Embassy in Beirut.”

BROTHERHOOD DISSOLVED?
BBC - 'No decision' in Egypt on dissolving Muslim Brotherhood: “Egypt's government has denied state media reports that it has decided to dissolve the Muslim Brotherhood. A social solidarity ministry spokesman was quoted as saying it would revoke the Islamist group's non-governmental organisation status ‘within days.’ But a prime ministerial aide, Sherif Shawki, told the BBC the solidarity minister had not issued any decision.”

[WaPo: “Not just Syria but Egypt requires a ‘shot across the bow’; Mr. Obama should take it before it is too late.”]

MEDIABUZZ DEBUT
Howard Kurtz’s “MediaBuzz” will launch at 11 a.m. ET Sunday on the Fox News Channel. Kurtz will be talking to media types and commentators about coverage choices, bias and the news about the news. The show will also encourage viewers sound off via Bing Pulse. [Ed. note: Very pleased to be on the first show. Thanks Howie!]

Americans fear Facebook more than NSA - Breitbart: “According to… [A Pew Poll].. that was released on Thursday, 33% of Internet users ‘wish to avoid hackers, or criminals,’ and 28% want to avoid advertisers. Only 5% ‘reported they wanted to avoid government observation.”’]

JINDAL JABS BACK ON EDUCATION PLAN
Gov. Bobby Jindal, R-La., has filed a motion to delay Attorney General Eric Holder’s court bid to end Louisiana’s school voucher program. Jindal blasts the administration in a statement, “President Obama and Attorney General Eric Holder are trying to legally jam the state in an ultimate attempt to force children from low-income families back into failing schools.” In a WaPo OpEd, Jindal writes, “Shame on all of us for standing by and watching generations of children stay in failing schools that may have led them to lives of poverty.”

WITH YOUR SECOND CUP OF COFFEE...
The WSJ considers the outrage over ObamaCare’s navigators in Navigating ObamaCare Outrage: “All of this outrage is part of the liberal alibi that Republicans are responsible if ObamaCare stumbles. But if the handsomely financed navigators can't spare an hour or two to comply with a congressional investigation, then the law must be in bigger trouble than Democrats care to admit.”

Got a TIP from the RIGHT or LEFT? Email FoxNewsFirst@FOXNEWS.COM

MIRACLE BABY
Rep. Jaime Herrera Beutler , R-Wash., and her husband, Daniel, will share the remarkable story of their daughter, Abigail, today with Correspondent Molly Henneberg. Abigail was diagnosed with Potter’s syndrome, a typically fatal condition, before she was born. The diagnosis often results with doctors recommending abortion. The Beutlers and Abigail’s medical team will share, for the first time, how she continues to beat the odds.

CONSISTENCY COUNTS
On this date in 1995, Cal Ripken Jr. broke Lou Gehrig’s 56-year-old record for most consecutive games played. Ripken would go on to beat Gehrig’s total by another 532 games. Ripen retired in 1998 after 2,632 consecutive games played for the Baltimore Orioles. At six feet, four inches, Ripken remains the tallest short-stop in Major League history.

AND NOW, A WORD FROM CHARLES…
“So we have to make a determination: Do we have a preference among the combatants in Syria?  Where is the national interest?  And the speech by [Samantha Power] our ambassador at the U.N., was a nice speech, you know, that you give in a debating society.  But unfortunately the world is a tough place, and we have to make a decision not in decrying the heartlessness of the rest of the world.” – Charles Krauthammer, on “Special Report with Bret Baier” Watch here