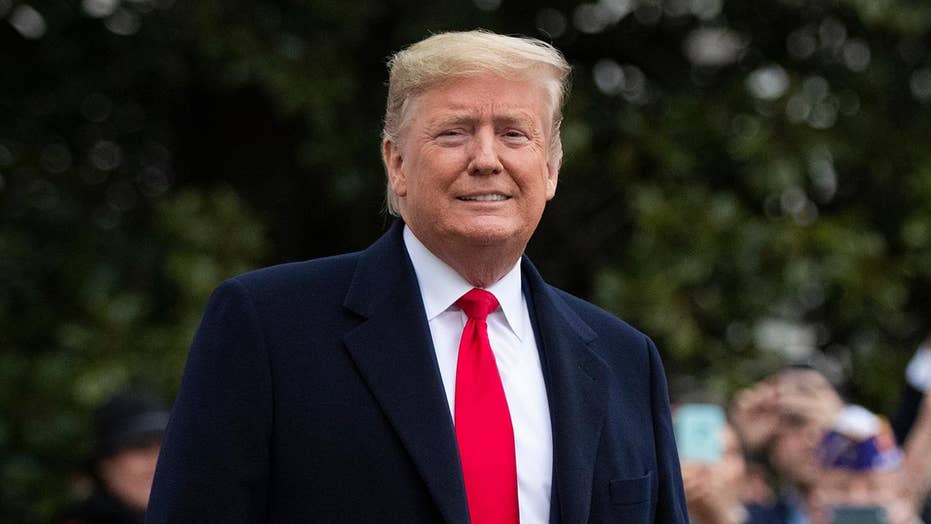 As President Trump heads for a campaign rally in Wisconsin, his defense team makes final preparations to present its case to the Senate; chief White House correspondent John Roberts reports.

Lev Parnas, a close associate of President Trump's personal lawyer Rudy Giuliani, has turned over a series of explosive handwritten notes, text messages and other documents, House investigators announced Tuesday, as the chamber prepares for an imminent vote on advancing articles of impeachment to the Senate.

In a letter to House Judiciary Committee Chairman Jerrold Nadler, D-N.Y., House Intelligence Committee Chairman Adam Schiff, D-Calif., wrote Tuesday that he would transmit to Nadler two flash drives: one containing "call records with sensitive personal information" that will not be publicly released, and another with materials provided by Parnas.

Among the records Parnas produced were "handwritten notes on stationary from the Ritz-Carlton Hotel in Vienna, Austria," Schiff wrote, including a note that read, "get [Ukrainian President Volodymyr] [Zelensky] to [announce] that the Biden case will Be Investigated; start commun[icating] with Zalensky [sic] without [Pinchuk or Kolomoisky]." An undated photograph of the note was included in the Democrats' documents.

The note by itself does not provide a major new revelation, as Giuliani has long acknowledged heading to Ukraine to seek investigations of Democratic presidential contender Joe Biden and other possible corruption in the country. The Trump team has strenuously denied delaying military aid to Ukraine in order to obtain an investigation of Biden specifically, although they have argued that endemic corruption is generally considered a valid reason to withhold aid.

And, Republicans and commentators quickly pointed out that Parnas has his own credibility issues.

Specifically, Parnas and his business partner Igor Fruman, both U.S. citizens who emigrated from the former Soviet bloc, have been indicted by federal prosecutors on charges of conspiracy, making false statements and falsification of records related to allegations that they made outsized campaign donations to Republican causes after receiving millions of dollars originating from Russia.

Additionally, Parnas' attorneys had stated last year that he would be willing to testify as part of the Democrats' impeachment inquiry, amid reports of a possible immunity deal to secure his appearance. Those discussions led Republicans to question whether Parnas simply was seeking to avoid jail time through his testimony.

However, also included in the documents were a series of materials that raised further questions about the Trump administration's actions in Ukraine. Text messages, for example, seemingly showed Parnas' associates tracking the movements of Marie Yovanovitch, the former U.S. ambassador to Ukraine who was recalled in May 2019.

Democrats have said Yovanovitch stood in the way of the administration's plan to secure a criminal probe into Biden. (Trump has raised concerns over Biden's videotaped boast of having Urkaine's top prosecutor fired, as well as Hunter Biden's lucrative role on a Ukrainian company's board while his father was directing Ukraine policy as vice president.)

Giuliani has since acknowledged his role in Yovanovitch's ouster, calling her corrupt. And, in his infamous July call with Zelensky, Trump remarked: "She’s going to go through some things,” referring to Yovanovitch.

Parnas communicated with prominent Trump donor Robert F. Hyde in March 2019 about the diplomat, the Democrats said, with Hyde writing that he "can't believe" Trump "hasn't fired this b--ch. I'll get right in that."

"Guess you can do anything in the Ukraine with money," Hyde texted, after apparently establishing that Yovanovitch was under some form of surveillance.

"She's talked to three people. Her phone is off. Computer is off," Hyde wrote on March 25, 2019. It was unclear how he would know that her computer was not on.

As Yovanovitch testifed during Democrats' impeachment inquiry," Hyde wrote on Twitter that she was a "traitor," a "scumbag," and a "yuge pos."

And, in a May letter sent directly to Zelensky, Giuliani requested a meeting with Ukraine's president and explicitly stated that Trump was aware of the arrangement -- even though Giuliani held no official government post at the time. A key portion of Democrats' impeachment argument has been that Trump associates had his imprimatur to pursue political investigations in Ukraine.

"However, I have a more specific request," Giuliani wrote, after congratulating Zelensky on his recent election win. "In my capacity as personal counsel to President Trump and with his knowledge and consent, I request a meeting with you on this upcoming Monday, May 13th, or Tuesday, May 14th."

Giuliani added: "I will need no more than a half hour of your time and I will be accompanied by my colleague Victoria Toensing, a distinguished American attorney who is very familiar with this matter."

Schiff further noted that, according to the documents, on Oct. 2, 2019, Trump attorney Jay Sekulow told former Trump attorney John Dowd that he had discussed “the issue of representation” with Trump, the Democrats said. Trump responded that he “consents to allowing your representation of Mr. Parnas and Mr. Fruman.”

But speaking to reporters on Oct. 10, Trump responded: "I don't know those gentlemen," when asked about Parnas and Fruman.

Joseph Bondy, the lawyer for Parnas, tweeted Monday that they had “worked through the night” to provide data from two of his client's smartphones to the House Intelligence Committee.

The Democrat-led committee subpoenaed Parnas for documents on Oct. 10, the day after news broke that he and Fruman had been arrested by federal authorities while trying to board a one-way flight to Europe.

"Mr. Parnas remains committed to testifying as to all the actions he took in Ukraine on behalf of @realDonaldTrump," Bondy said.

Though the House voted to impeach Trump in December, Schiff has pressed ahead with efforts to gather more information and documents in advance of the president's upcoming trial in the Senate.

While Parnas and Fruman were working with Giuliani to push for investigations of the Bidens, the two Florida-based businessmen were also leveraging political connections to Trump and other prominent Republicans to pursue a lucrative natural gas deal.

Bondy's tweets on Monday included a photo of Parnas posing with Trump, both men smiling and giving a thumbs-up, paired with the hashtags #LetLevSpeak and #LevRemembers.

Federal prosecutors in New York are separately investigating Giuliani’s business dealings, according to multiple reports, including whether or not the former New York City mayor failed to register as a foreign agent.

A federal judge ruled earlier this month that Parnas' cellphone data could be provided to House investigators.

The documents dropped as the House is set to vote Wednesday to send the articles of impeachment against Trump to the Senate for a landmark trial on whether the charges of abuse of power and obstruction of Congress are grounds for removal.

House Speaker Nancy Pelosi, D-Calif., announced the next steps after meeting privately with House Democrats at the Capitol, ending her blockade Tuesday -- a month after Democrats voted to impeach Trump.

It will be only the third presidential impeachment trial in American history, a serious moment coming amid the backdrop of a politically divided nation and an election year.

“The president and the Senators will be held accountable,” Pelosi said in a statement. “The American people deserve the truth, and the Constitution demands a trial.”