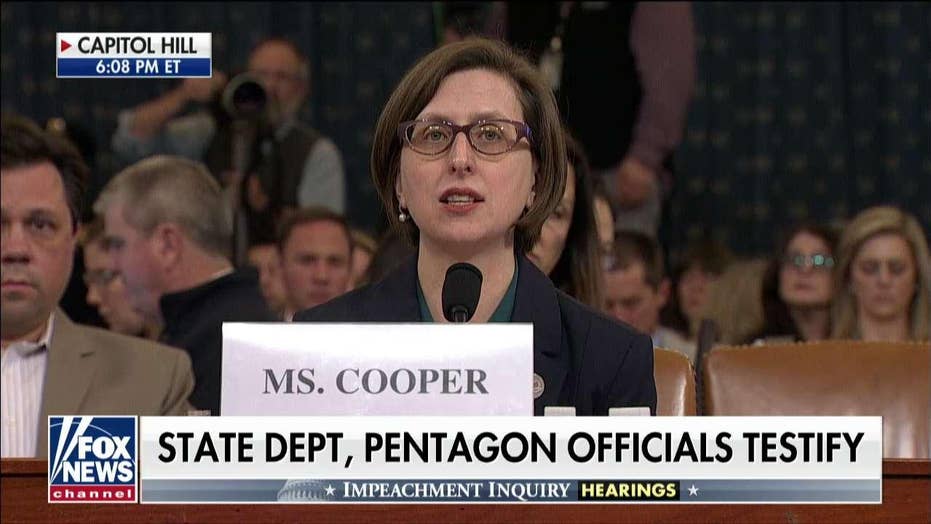 Laura Cooper, a deputy assistant secretary of defense, testified Wednesday that her staff received indications Ukraine may have been aware that U.S. aid was being withheld as early as August or even July 25 -- the date of President Trump's momentous phone call with Ukraine's leader, in which the president mentioned an investigation into Joe and Hunter Biden's dealings there.

At the same time, Cooper said she was under the impression the aid was restricted simply due to the Trump administration's concerns over "corruption" in Ukraine. Cooper testified she was never provided any other explanation for the hold, though others have asserted it was tied to the effort to extract an investigation of the Bidens.

Similarly, top State Department official David Hale, sitting alongside Cooper, testified that he was unaware of any "nefarious" motive by the Trump administration in withholding the aid. He said financial assistance to several other countries was withheld as well.

In a blow to GOP arguments that Ukraine was unaware of the aid holdup this summer, though, Cooper said that her staff had made her aware of "two unclassified emails" from the State Department, both from July 25. One email indicated that the Ukrainian Embassy and House Foreign Affairs Committee "are asking about security assistance." The second, also on July 25, said that "the Hill knows about the FMF [Foreign Military Financing] situation to an extent, and so does the Ukrainian Embassy."

It's unclear whether that meant Kiev was specifically aware of the hold at that time; the White House reportedly countered that this was merely an assumption.

But the emails would appear to suggest some awareness of a problem, and Cooper said her staff believed that Ukraine was at least “aware of the hold on security assistance” in August, though she couldn’t point to specific conversations in which it came up.

Ukrainian Embassy staff, Cooper said, asked "what is going on" with their military aid. Although she stressed she had never talked to Trump about the matter, Cooper said she made an "inference" that the aid would be released if Ukraine issued a public statement on corruption.

Cooper's remarks updated her earlier testimony in a closed-door deposition and provided new information that Ukraine may have been aware of the aid suspension earlier than previously thought. During his July 25 call with Ukrainian President Volodymyr Zelensky, Trump suggested Zelensky investigate Joe Biden's dealings in Ukraine, including the former vice president's successful push to have Ukraine's top prosecutor fired by threatening to withhold $1 billion in U.S. aid while the prosecutor was investigating Burisma Holdings, where Hunter Biden served on the board.

"In July, I became aware of a hold being placed on the obligation of State Department's Foreign Military Financing and DoD's USAI funds," Cooper said. "In a series of interagency meetings, I heard that the president had directed the Office of Management and Budget to hold the funds because of his concerns about corruption in Ukraine. Let me say at the outset that I have never discussed this or any other matter with the president and never heard directly from him about this matter."

"This was a very important decision to support Ukraine with this capability," Cooper said.

Hale testified that aid was withheld from other countries besides Ukraine, including Honduras, Lebanon, and Pakistan. He said it was not unusual for the White House not to provide a specific explanation for why aid was being withheld. However, Hale said that the Office of Management and Budget (OMB) in the White House was the only agency that didn't support lifting the hold on aid for Ukraine.

Under questioning from Ohio GOP Rep. Jim Jordan, Hale clarified that he was unaware of any "nefarious" motive for withholding aid to Ukraine, and had no information to suggest that there was a quid pro quo for investigations. He said it was a "general impression" at the State Department that Trump was skeptical of providing foreign aid.

In blockbuster testimony hours earlier, Sondland tied top Trump administration officials to a “potential quid pro quo” involving U.S. military aid to Ukraine and investigations desired by the president, but he acknowledged under cross-examination from Republicans that he never heard that from Trump -- saying he was making presumptions and the president expressly rejected any such arrangement. Democrats, though, argued that Sondland nevertheless described a quid pro quo arrangement in his testimony, suggesting Trump must have been involved.

Cooper testified last month that the Trump administration had pushed Ukraine to issue a public statement disavowing any efforts to influence U.S. elections -- but she stopped short of saying that officials wanted to include a reference to Joe and Hunter Biden's business dealings in the country.

Additionally, Cooper has testified that Pentagon officials began receiving "phone calls from industry" -- apparently referring to private companies that supply weapons and military hardware to the government -- after President Trump initiated a hold on military aid to Ukraine earlier this year.

Cooper also testified about Defense Department concerns that Trump's temporary withholding of military aid to Ukraine may have been illegal. The legalities likely regarded the issue of "impoundment" – the requirement that the president either had to spend the money or "impound" it.  The White House was coming up against an impoundment deadline when it released the funds for Ukraine.

Under questioning on Wednesday, she reiterated that Ukraine is a vital strategic partner to the United States.

Meanwhile, Hale -- the State Department’s No. 3 official -- testified in a Nov. 6 closed-door deposition that no one in the Trump administration or any "government channel" ever mentioned Joe or Hunter Biden as a reason for withholding aid from Ukraine, according to a transcript of his remarks.

Democrats have argued that the White House improperly pressured Ukraine to look into the Bidens and Burisma, the natural gas company where Hunter Biden held a lucrative role despite limited expertise while his father oversaw Ukraine policy as vice president.

George Kent, a State Department official who has also testified in the impeachment investigation, said he flagged Hunter Biden's apparent conflict of interest to the Obama administration at the time.

However, Hale said, he saw the Bidens referenced only in media reports -- as well as in a "speculative" email from former U.S. Ambassador to Ukraine Marie Yovanovitch, who testified last week.

Yovanovitch "mentioned that Mayor [Rudy] Giuliani might have been motivated to sully Vice President Biden's reputation by reminding the world of the issue regarding his son's activities in Ukraine," Hale testified, referring to President Trump's personal attorney.

David Hale, Under Secretary of State for Political Affairs, arrives on Capitol Hill in Washington, Wednesday, Nov. 6, 2019, to be interview for the impeachment inquiry. (AP Photo/Susan Walsh)

Hale and Cooper's testimony came shortly after Sondland tied top officials to the “potential quid pro quo” involving U.S. military aid to Ukraine and investigations desired by Trump – yet said he never heard that link from the president himself.

One of the key witnesses in the Democrat-led impeachment inquiry against Trump, Sondland claimed he kept Secretary of State Mike Pompeo aware of what was going on and said he specifically told Vice President Pence he "had concerns" the military aid to Ukraine "had become tied" to investigations -- though a Pence aide denied it. And he repeatedly lambasted Trump lawyer Rudy Giuliani’s leading role in the administration’s Ukraine dealings.

"Everyone was in the loop," Sondland testified. "It was no secret."

He testified to a clear "quid pro quo" linking a White House meeting with Ukraine's president to the investigation request, even as he couched his language regarding the aid.

In comments touted by Trump later in the day, Sondland clarified: “I never heard from President Trump that aid was conditioned on an announcement" of investigations. He said he never personally heard Trump discuss preconditions. And at one point, he confirmed Trump told him, "I want nothing."

Throughout, Republicans sought to emphasize their view that the impeachment proceedings were fundamentally unfair. House Intelligence Committee ranking member Devin Nunes, R-Calif., kicked off the questioning in the afternoon hearing by focusing on the potential witnesses who had been blocked from appearing by Democrats.

"I’d like to take a moment to discuss a few of the people whose testimony has been deemed unacceptable for the American people to hear," Nunes said. "The whistleblower is the key figure who started this entire impeachment charade by submitting a complaint against President Trump that relied on second-hand and third-hand information and media reports."

Nunes then pointed to Alexandra Chalupa, whom he called a "former operative for the Democratic National Committee who worked with officials of the Ukrainian Embassy in Washington D.C. in order to smear the Trump campaign."

He concluded: "Hunter Biden is another witness who the Democrats are sparing from cross-examination. His securing of an extremely well-paying job on the board of a corrupt Ukrainian company, Burisma, highlights the precise corruption problem in Ukraine that concerned not only President Trump, but all the witnesses we’ve interviewed. ... The Democrats have dismissed questions about Biden’s role at Burisma as conspiracy theories, yet they’re trying to impeach President Trump for having expressed concerns about the company."