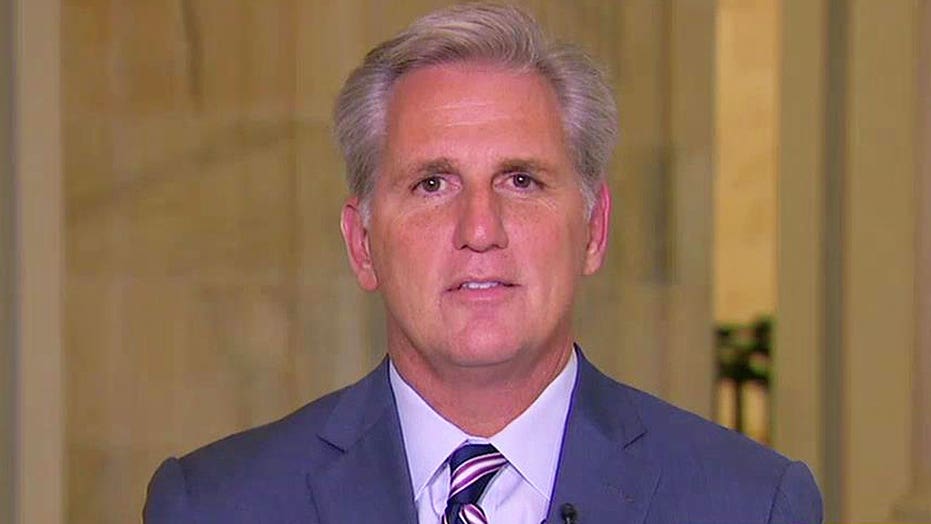 Rep. Kevin McCarthy how he would differ from John Boehner

Why every Republican should have a voice; House Majority Leader speaks out on 'Hannity'

Democrats on Wednesday accused House Majority Leader Kevin McCarthy of having admitted the Benghazi investigation committee was created to politically damage Hillary Clinton, after he seemed to link her dropping poll numbers to the committee's work.

McCarthy, considered the front-runner to replace retiring Speaker John Boehner, made the remarks in an interview with Fox News' Sean Hannity Tuesday night. Describing how he would be different as speaker, McCarthy, R-Calif., said he'd be a "conservative speaker that takes a conservative Congress that puts a strategy to fight and win."

He added: "And let me give you one example. Everybody thought Hillary Clinton was unbeatable, right? But we put together a Benghazi special committee, a select committee. What are her numbers today? Her numbers are dropping. Why? Because she's un-trustable. But no one would have known any of that had happened had we not  ..."

Democrats suggested his comments undermine claims by the committee's leader and other Republicans that the panel is only seeking the truth about the deadly 2012 attacks at a U.S. diplomatic facility in Benghazi, Libya.

"I appreciate Rep. McCarthy finally coming clean and admitting what we have all known all along: that the Benghazi Select Committee was designed and created as a political attack tool to damage a potential Democratic presidential nominee," Rep. Adam Smith, D-Wash., a Benghazi committee member and top Democrat on the House Armed Services Committee, said in a statement.

Rep. Elijah Cummings of Maryland, the senior Democrat on the Benghazi panel, called it "shameful" that Republicans have "used the tragedy... for political gain."

The comments are causing some turbulence for McCarthy as he seeks to replace Boehner in the top House post.

A spokesman for McCarthy, though, said the Benghazi panel remains focused on getting the facts about the 2012 attacks that led to the death of four Americans, including the U.S. ambassador to Libya.

The Benghazi panel's investigation and an inquiry by the FBI into Clinton's email practices "have nothing to do with politics and everything to do with the consequences of what the former secretary has done and her confusing, conflicting and demonstrably false responses," said Matt Sparks, a McCarthy spokesman.

Clinton, a former secretary of state and the Democratic frontrunner for president in 2016, has been dogged by questions about her use of a private email account and server for government business. The Benghazi committee played a key role in discovering the private emails.

McCarthy's comments come at a critical time for the committee as it prepares to question Clinton next month in a high-profile public hearing. The panel also is expected to interview Huma Abedin, a top Clinton aide, behind closed doors. Abedin, considered one of Clinton's closest confidantes, is expected to testify Oct. 16, six days before Clinton.

Republicans have questioned Abedin's jobs at a private consulting firm and the private Clinton Foundation while remaining at the State Department.

Brian Fallon, a spokesman for Clinton's campaign, called McCarthy's comments "a damning display of honesty" by the likely next speaker of the House.

"Kevin McCarthy just confessed that the committee set up to look into the deaths of four brave Americans at Benghazi is a taxpayer-funded sham. This confirms Americans' worst suspicions about what goes on in Washington," Fallon said.