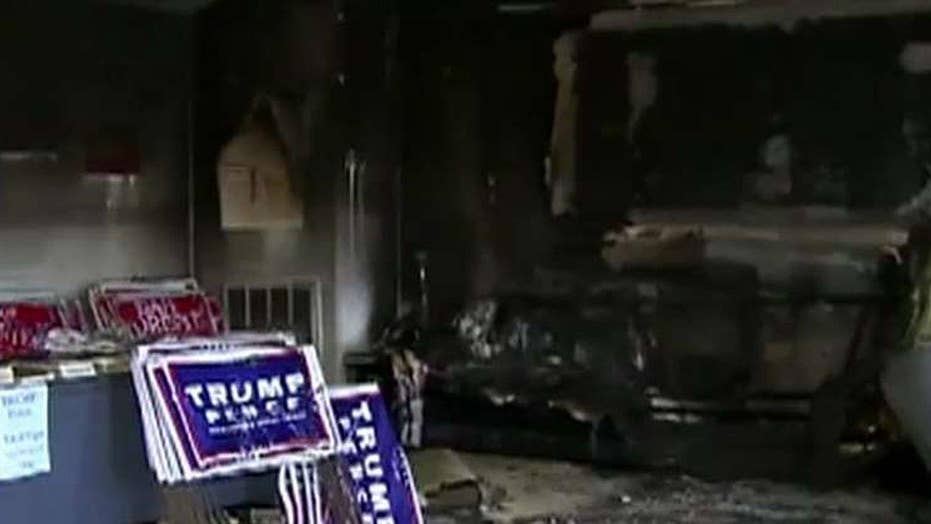 What started as a suspected political act of terror in North Carolina soon helped bring party lines together on Sunday night, after a GOP building was firebombed. Democrats rallied behind Republicans raising funds for the office that was attacked.

The GOP office was vandalized late Saturday night as a bottle of flammable liquid was thrown through one of the windows, along with the words “Nazi Republicans leave town or else”. A swastika was also spray painted on a building adjacent to the office. No one was injured.

Democrats launched a GoFundMe campaign that raised over $13,000 in just 10 hours. The campaign reached their goal of $10,000 before it closed the fund, no longer accepting donations.

The campaign was created by David Weinberger, a research fellow at the Berkman Center for Internet and Society at Harvard Law School. The GoFundMe page had this message:

“On October 16, a North Carolina headquarters of the Republican Party was firebombed, and an abhorrent threat was painted on its outside wall.

"As Democrats, we are starting this campaign to enable the Orange County, North Carolina Republican office to re-open as soon as possible.

"Until an investigation is undertaken, we cannot know who did this or why. No matter the result, this is not how Americans resolve their differences. We talk, we argue, sometimes we march, and most of all we vote. We do not resort to violence by individuals or by mobs.

"So, let's all pitch in, no matter what your party affiliation, in and get that office open again quickly.”

Over 500 people contributed to the campaign with some leaving comments with their donation.

One donator said, “Not a republican, but we all stand together against such anti-democratic violence”, while another added, “This is not an official effort of the Democratic Party. It is the effort of a half dozen Democrats (of which I am one). This is a moment for graciousness, not fractiousness.”

The violent act in the key battleground state was condemned by public figures across the political spectrum.

Hillary Clinton, the Democratic nominee for president said on Twitter that the attack "is horrific and unacceptable. Very grateful that everyone is safe."

Republican nominee Donald Trump blamed the act on Democrats in a tweet and also he encouraged local Republicans, saying: "With you all the way, will never forget. Now we have to win. Proud of you all!"

North Carolina Gov. Pat McCrory said in a tweet that the firebombing was “clearly an attack on Democracy.”

At a news conference, Woodhouse urged Republicans to respond peacefully by turning out to vote in November. He said he'd received messages of support from Democrats.

He said Republican offices around the state were re-examining their security.

Orange County GOP chairman Daniel Ashley told reporters that no one had previously made violent threats against the office several miles from the town's historic square. The GOP office is several doors down from a shuttered ice rink in what was once a frontier-themed amusement park that is now a retail complex known as The Shops at Daniel Boone.

Tom Stevens, mayor of the town about 40 miles northwest of Raleigh, said that it was fortunate the fire didn't burn the office and other adjacent buildings that are decades old to the ground.

Stevens, a Democrat, said the act doesn't represent the character of Orange County, which also includes much of Chapel Hill and the University of North Carolina campus. Registered Democrats outnumber Republicans by a 3-1 margin in the county that picked President Barack Obama by a lopsided margin in the 2012 election.

"I'd like to believe we aspire to respect hearing differing views," Stevens said in an interview. "This is very troubling."

Stevens said he wasn't aware of any leads on suspects. Police and officials from the Bureau of Alcohol, Tobacco, Firearms and Explosives were investigating.