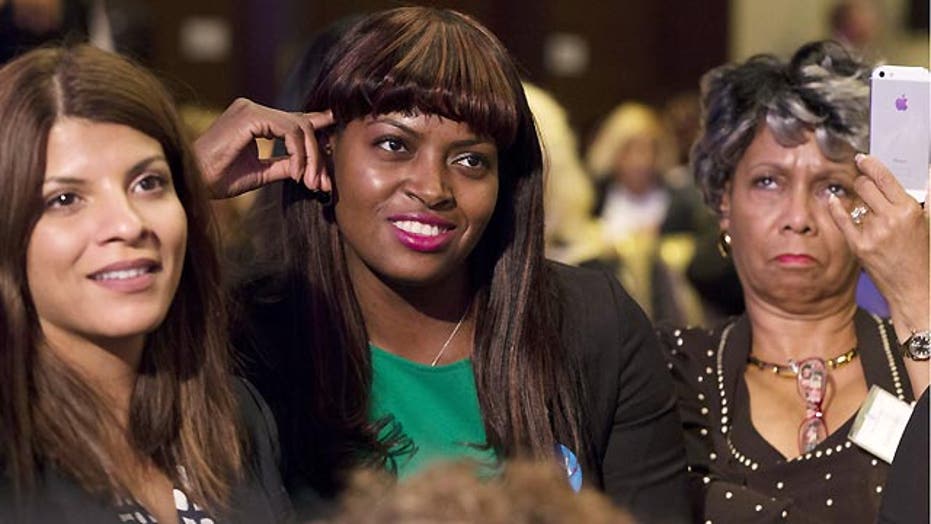 With little more 40 days until voters head to the polls, the 2014 midterm election cycle marks the first in modern history in which Democrats find themselves scrambling to reclaim the lion’s share of the female vote in such elections.

Women tilted Republican in 2010, an unprecedented development since exit polling for congressional races began in 1992, and both parties recognize the critical role women will play in determining whether the GOP regains control of the Senate.

With such concerns in mind, the Democratic Party’s biggest guns – President Barack Obama, Vice President Joe Biden, and former Secretary of State Hillary Clinton, the party’s putative frontrunner if she runs in 2016, as many expect – descended on Washington’s Marriott Marquis Hotel, site of the 21sr annual conference of the Democratic National Committee’s Women’s Leadership Forum.

The event represented a homecoming of sorts for Clinton, who co-founded the group back in 1993, when she was First Lady. Conceding that midterm elections are not as “glamorous” as presidential contests, Clinton urged the several hundred people in attendance to vote in November, singling out a number of female candidates locked in tight House and Senate races across the country. “This election is a crucial one,” she said.

While touting her own record on women’s issues – a term Clinton herself discounted, preferring instead “family issues” – the potential 2016 contender also praised the records of Obama and Biden, who has made no secret of his interest in pursuing the Democratic presidential nomination.

Following the rocky rollout for her book this spring, when Clinton’s comments about her finances prompted criticism that she has lost touch with ordinary Americans, she used the DNC event to emphasize that she understands the challenges faced by working mothers.

She recounted her own days as a young attorney in Arkansas, when her husband, the future president, was the state’s governor, and the couple occasionally had problems lining up day care for their daughter Chelsea.

Obama argued that America is “better off” now than when he became president, and that “strong women” will help the nation reach its best days in the years to come. He also rose to the defense of the embattled DNC chair Rep. Debbie Wasserman Schultz of Florida. Published reports over the past week have alluded to dissatisfaction with Wasserman-Schultz within Democratic ranks – alternately linked to the White House and the Clinton camp – and suggested that some party activists are angling for her replacement.

“Nobody, anywhere, works harder than Debbie Wasserman Schultz,” the president said in comments that followed the congresswoman’s staunch defense of the Obama administration’s record on issues of concern to women.

Biden also defended the DNC chair, saying, “If we want anybody to do that 60 seconds or 120 seconds we get to respond to some attack on the president or on the administration, the best person…is always Debbie.”

As the principal architect of the Violence Against Women Act, a landmark law enacted 20 years ago, Biden enjoys a solid reputation among women voters. However, he committed a gaffe Friday when, in his remarks before the mostly female crowd, he praised the moderation of a number of Republican senators with whom he used to collaborate on legislation – and specifically named former Sen. Bob Packwood of Oregon, who was forced to resign in 1995 amid multiple allegations of sexually harassment.

Polls show no clear trend lines for women voters in key races for the Senate, where Republicans need to win six seats to reclaim majority control of the chamber. Some analysts argue that that bodes well for the GOP, because it shows Democratic candidates are not enjoying the kind of lopsided support from women that they may need in order to offset traditional Republican strength among male voters.

With videos of the beheadings of two American journalists driving fears about the deteriorating state of the Middle East, and U.S. military forces preparing for war against the terrorist army known as ISIS, one female conservative suggested this election cycle will witness the return of “security moms” – female voters distrustful of Democrats on national security issues.

“After all of the unraveling around the world this summer with President Obama’s foreign policy – in the Middle East, with ISIS, in Russia, new relationships with China – we see that unraveling is unsettling to women,” said Gayle Trotter,an attorney and senior fellow with the Independent Women’s Forum in Washington. “More women are saying now that foreign policy is something that they’re very concerned about for the midterm elections.”