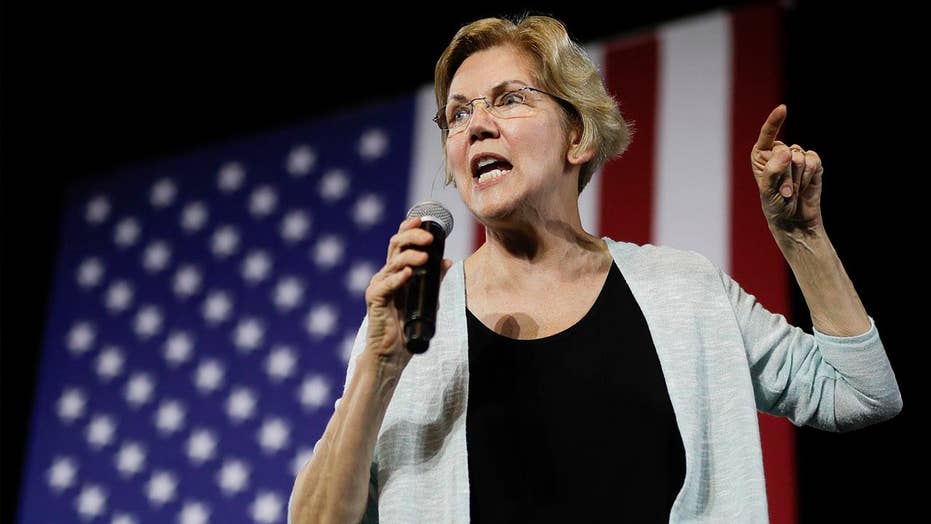 Joe Biden remains the front-runner in the race for the Democratic presidential nomination, but a new national survey indicates Sen. Elizabeth Warren tops the former vice president by double digits when it comes to enthusiasm.

Thirty-five percent of likely Democratic primary voters questioned in a new NBC News/Wall Street Journal poll said they’re enthusiastic about voting for the populist senator from Massachusetts who’s put out one progressive policy proposal after another. That’s a dozen percentage points ahead of the 23 percent who said they were enthusiastic about voting for the former vice president.

WARREN GETS STUMPED BY COLBERT

And Warren -- who’s been on a steady rise in both national and early primary and caucus voting state polling the last five months -- also gets the most second-choice support, with 21 percent of Democratic primary voters saying she would be their second choice in the record-setting field of roughly 20 White House hopefuls.

The poll's Tuesday release came a day after an estimated crowd of up to 20,000 people showed up to see Warren at a rally in New York City.

Biden leads the overall horse race, with 31 percent support in the poll. That’s up 5 points from Biden’s standing in the previous NBC/WSJ survey from July.

The new poll was conducted Sept. 13-16, in the days following the third round Democratic presidential primary debate. Biden received praise from political pundits for his more steady performance, especially at the start of the showdown when he aggressively questioned how Warren and Sen. Bernie Sanders of Vermont – the other progressive standard bearer in the Democratic field – would pay for their Medicare-for-all proposals.

Warren stood at 26 percent support in the poll, up 6 points from the previous NBC/WSJ survey. Sanders was in third place, at 14 percent.

South Bend, Indiana Mayor Pete Buttigieg was at 7 percent in the poll, with Sen. Kamala Harris of California at 5 percent. That’s down from 13 percent in July, when Harris enjoyed a surge in polling in the wake of her take down of Biden at late June’s first round of debates.

Tech entrepreneur Andrew Yang stood at 4 percent in the new poll, with Sens. Cory Booker of New Jersey and Amy Klobuchar of Minnesota at 2 percent. Everyone else in the Democratic primary race registered at 1 percent or less.

The survey indicates Biden leading Warren 42 to 15 percent among self-described moderate or conservative Democrats, while the senator tops the former vice president 36 to 19 percent among those who describe themselves as liberal.

Biden also enjoyed a significant advantage among black voters and older voters, with Warren holding a strong edge among women with college degrees and voters calling for large scale change.

The NBC/WSJ poll was conducted by live telephone operators, with 506 Democratic primary voters questioned. The survey’s sampling error was plus or minus 4.4 percentage points.