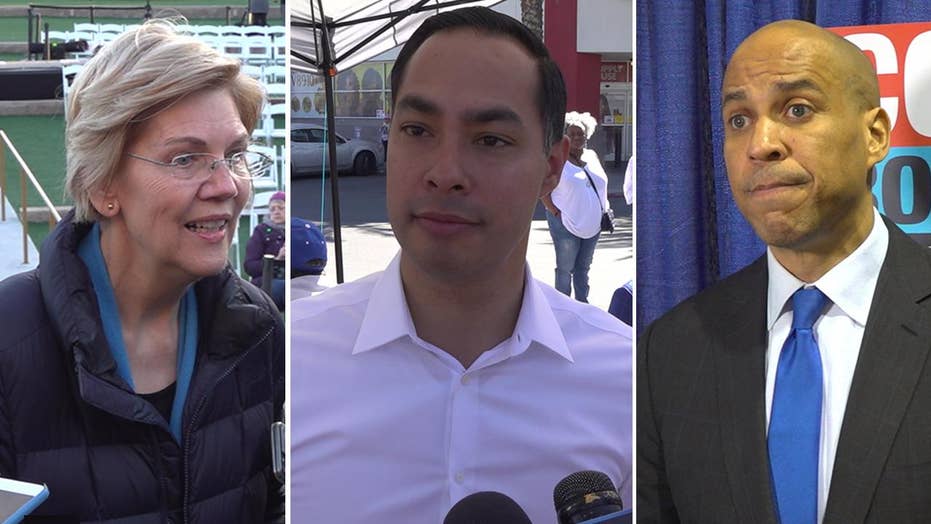 Democrat presidential hopefuls are hitting the campaign trail touting their plans to better the economy, while pushing for a federal minimum wage of $15 per hour -- but could it actually pass in Washington?

LAS VEGAS -- Democratic presidential hopefuls are hitting the campaign trail touting their plans to better the economy while pushing for a federal minimum wage of $15 an hour. But is it a promise they can keep -- or simply political rhetoric?

“Well, clearly the statement of a $15 minimum wage is a political statement. It's a part of the campaign,” said Stephen Miller, professor & director at the University of Nevada, Las Vegas Center for Business and Economic Research. He said the reality is “a really complicated story.”

A little more than half the states have a higher minimum wage than the federally required $7.25, with New Jersey recently implementing a plan to gradually increase its wage to $15 by 2024.

But to more than double the federal minimum wage across the board is a bit more complicated.

“Going to a $15-minimum wage, you’re not going to do that in one step – it’s going to have to be multiple steps over multiple years. Whenever you have a cost increase, then that affects business decisions and businesses are substituting capital for labor,” Miller said. “You know, if you're an employee and you're still working and it’s a $15 minimum wage, then you win, I suppose. But there are other people that that will be let go, that won't have a job.”

The U.S. Small Business Administration declined to comment to Fox News when asked about Democrats push to raise the federal minimum wage.

“Today a minimum wage fulltime job in America will not keep a momma and a baby out of poverty,” Sen. Elizabeth Warren of Massachusetts told a packed crowd at a rally in Las Vegas last month. “That is wrong and it is why I’m in this fight.”

Former Housing and Urban Development Secretary Julian Castro  echoed those sentiments, telling Fox News after a sit-down lunch with Dreamer families in Nevada that “there’s so many improvements to our economy and to the quality of life that we need to make in this country, including by raising the minimum wage.”

Ohio Sen. Sherrod Brown, who is still mulling over a presidential run, also stopped in Nevada as part of his “Dignity of Work” tour where he asserted himself as a champion for worker’s rights.

“Dr. King said no work was menial if it pays an adequate wage, and far too many Americans are working so hard and not making a decent wage,” Brown told Fox News at a rally last week.

“I believe it's something that will resonate with voters because Democrats can present themselves as sort of the party of workers and party trying to do their best to lift up those who need the most help,” Chavous told Fox News.

But some say smaller companies cannot afford to pay higher wages -- it could even put some out of business.

“As far as big companies, say like Amazon and Google, I’m sure they can give them the $15-minimum wage, but as far as local companies, as far as local stores, that may be an issue.” Aremy Tirado, a college student in Nevada, told Fox News.

Although Chavous recognizes that “most respected economists have acknowledged that this proposal may cause some jobs to be lost,” he said to look at areas like California and New York, where a higher minimum wage has already been instituted, albeit still a few bucks below the $15 mark.

“I think that the momentum around the campaign is only going to get stronger and stronger as people continue to fall behind and struggle to provide basic necessities for their families,” he noted.

Miller said he expects to see a push for minimum wage changes if Democrats take control of Congress and the Oval Office, but said it is “unlikely that it would be $15.”

“You might see that be boosted a couple of bucks,” he said.