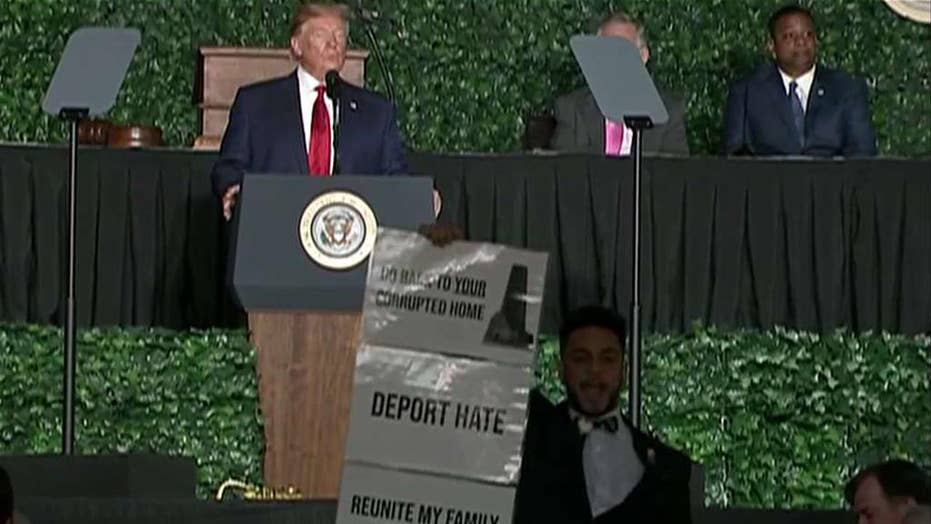 Crowd shouts down man holding sign that reads 'go back to your corrupted home,' 'deport hate' and 'reunite my family.'

The Virginia Democratic lawmaker who disrupted President Trump’s speech in Jamestown on Tuesday has a history of making anti-Israel remarks on social media.

Ibraheem Samirah, a Virginia state delegate, interrupted Trump’s event commemorating the 400th anniversary of the first legislative assembly in the U.S. by shouting: “You can’t send us back! Virginia is our home!”

Samirah’s protest was apparently in response to Trump’s comments about the “Squad” earlier this month, when he suggested that Reps. Ilhan Omar, D-Minn., Rashida Tlaib, D-Mich., Alexandria Ocasio-Cortez, D-N.Y., and Ayanna Pressley, D-Mass., should “go back and help fix the totally broken and crime infested places from which they came,” and then return to show how it's done.

But Samirah, a Palestinian-American, has his own history of controversial comments—specifically related to Israel.

The Washington Post, in February, reported on a series of Samirah’s social media posts from 2014 that have since been deleted.

In one Facebook post in 2014, Samirah shared an angry letter by musician Brian Eno who claimed that funding Israel was like supporting the Ku Klux Klan.

“I’d say worse,” Samirah wrote, sharing the letter. “But I’ll go along with Eno on this one.”

In another post from 2014, after former Israel Prime Minister Ariel Sharon died, Samirah wrote: “Ariel Sharon, burn. Burn a million times for every innocent soul you killed. Hell is excited to have you.”

Samirah also reportedly posted comments about Israeli teenagers, sharing an article about how Israel uses social media and dating apps to “legitimize murder,” writing: “Most Israeli teenagers not only want to cover up the murders in their name, but they have young urges that need to be released somehow! Tinder’s perfect for that.”

Samirah, who was a former volunteer for Tlaib, also is reportedly connected to multiple anti-Semitic organizations.

After disrupting the president’s speech on Tuesday, Samirah tweeted a statement, saying that he interrupted because “nobody’s racism and bigotry should be excused for the sake of being polite.”

“The Man is unfit for office and unfit to partake in a celebration of democracy, representation, and our nation’s history of immigrants,” Samirah tweeted, attaching a full statement.

Meanwhile, the president blasted the mainstream media for focusing “100 percent of the time” on the protester, rather than his speech.

“You gave the protester 100 percent of the time, not one word of the speech—that’s why we were there,” Trump said when he returned to the White House Tuesday. “He didn’t look so good to me, but you gave him 100 percent—you often do that, okay.”

The president’s speech focused on the first legislative assembly founded in 1619 in Jamestown, Va.

“That is why, after 400 years of glorious American democracy, we have returned here to this place to declare to all the world that the United States of America and the great Commonwealth of Virginia are just getting started,” Trump said in his speech. “Our future is bigger, bolder, better, and brighter than ever before.”