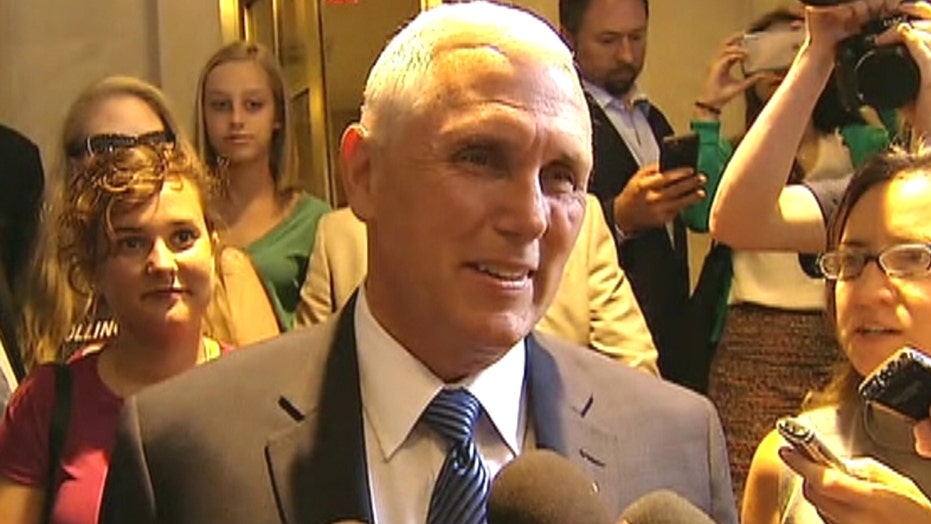 Donald Trump's tweet announcing his running mate was not even moments old when the Democrats' knives came out to attack Indiana Gov. Mike Pence as "extreme" and "divisive" -- and unload their opposition research.

Almost immediately after Trump named Pence, Hillary Clinton’s campaign blasted out an email Friday calling him “the most extreme VP pick in a generation.”

Clinton’s campaign outlined its talking points against the governor, pointing specifically to his record on LGBT and abortion rights, as well as his free-market economic policies.

“By picking Mike Pence as his running mate, Donald Trump has doubled down on some of his most disturbing beliefs by choosing an incredibly divisive and unpopular running mate known for supporting discriminatory politics and failed economic policies that favor millionaires and corporations over working families,” John Podesta, chairman of Hillary for America, said in a statement.

Trump certainly gave Democrats time to prepare. Speculation was centering on Pence earlier in the week, and by Thursday it was widely expected he would be the choice. Still, Trump postponed a planned press conference on the topic Friday morning due to the terror attack in France.

While that event is now set for Saturday, Trump confirmed on Twitter shortly before noon that he selected Pence.

By that point, Democrats were ready with their lines of attack, even as conservatives largely praised Trump for his pick.

The Podesta email claimed Pence “spearheaded an anti-LGBT law that legalized discrimination against the LGBT community” -- a reference to the Religious Freedom Restoration Act, which the state later revised -- and notes that he led the battle to defund Planned Parenthood. It also took him to task for opposing raising the federal minimum wage.

“This new Trump-Pence ticket stands in dramatic contrast to Hillary Clinton’s vision of our future - one where we are stronger together, where unity prevails over division and the economy works for all Americans, not just those at the top,” Podesta said.

Clinton’s rapid response team went to work immediately, not only dropping the lengthy email to followers but also tweeting out a series of images summarizing their arguments against Pence and using the pick to call for donations.

If you had any doubts about Trump sticking with his dangerous plan for America, say hello to his VP pick. pic.twitter.com/xuFClfZeLi

Chip in to keep Donald Trump, Mike Pence, and their extreme agenda out of the White House: https://t.co/7rBBdqe31P

Former Democratic presidential candidate Martin O'Malley also took to Twitter to remind the public that Pence had criticized Trump not so long ago for his call for a temporary ban on Muslim immigration.

Totally agree with you, Mike. https://t.co/mavHRSthtW

Republicans, meanwhile, mostly praised the choice, seen by analysts as a way for Trump to build inroads with the social conservative base -- and Congress, where Pence previously served.

"Mike Pence comes from the heart of the conservative movement -- and the heart of America," House Speaker Paul Ryan said in a statement. "I can think of no better choice for our vice-presidential candidate. We need someone who is steady and secure in his principles, someone who can cut through the noise and make a compelling case for conservatism. Mike Pence is that man."

Tea Party Patriots co-founder Jenny Beth Martin said in a statement that Pence “provides the opportunity to give GOP voters still undecided about Donald Trump a reason to unite and to vote for a more principled ticket.”