Schumer says Democrats can win back Senate. Is he right?

The 'Outnumbered' panel debates the Democrats' chances in the midterm elections.

Midterm elections are usually a referendum on the president.

But in their effort to focus attention on President Trump, Democrats could make the midterms about their own divisions.

Trump’s assertion that Russia didn’t meddle in American elections sparked an inferno on the left. To progressives, the remarks epitomized what they see as the president’s deficiencies for office.

It was treachery. Sedition. Subversion. And from the president of the United States himself.

It would be easy to examine how Trump’s comments yet again placed congressional Republicans in a tough spot. GOPers have long grimaced about Trump emerging as their nominee, the "Access Hollywood" tape, his comments about Europe and NATO, “fire and fury” and the unilateral imposition of tariffs.

But the president’s statements may actually pose more peril to Democrats. Why? Much like Republicans, Democratic leaders appear paralyzed as to how to respond to the president – especially the episode in Helsinki. Top Democratic leaders in Washington want to be tough – but also serve as the voice of reason. They fear alienating swing voters. Meantime, liberals are prepared to go “Maxine Waters” on the president. The left wing is confounded why all Democrats don’t follow their lead. 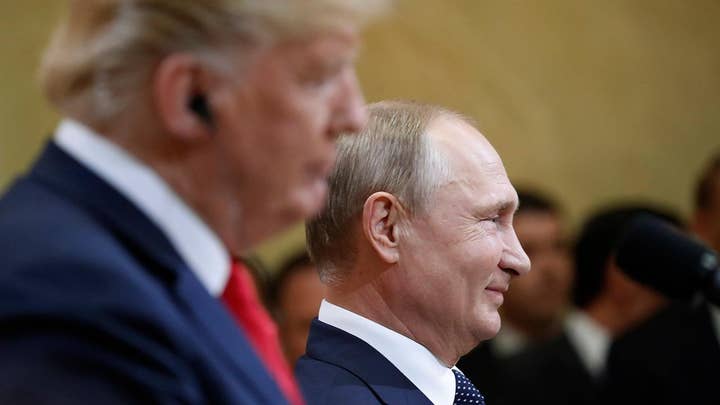 “We need action. Bipartisan, strong action,” demanded Senate Minority Leader Chuck Schumer, D-N.Y., just hours after Trump wrapped up in Helsinki. “We need our Republican colleagues to stand up for the good of this country.”

Schumer wants sanctions, hearings, an end to attacks on the FBI and Special Counsel Robert Mueller and a trial for the 12 Russians accused of election interference.

But what about Democrats?

“We don’t have the gavel,” replied Schumer. “The best thing we can do is speak truth to power.”

Does an answer like that assuage the left? Or does this threaten to tear at the seams of the party as progressives demand more?

“We should have a resolution of disapproval on the floor, maybe even a censure, given what the president did,” said Rep. Jim McGovern, D-Mass.

But a vote to condemn Trump is troublesome for moderate Democrats who represent districts and states where Trump is popular. 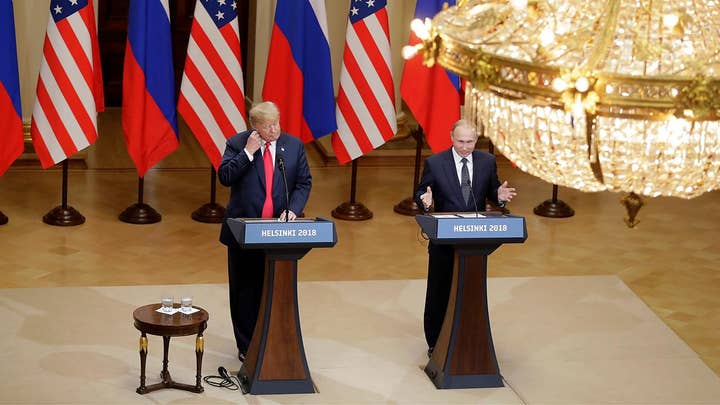 As a result, top Democrats are anxious about how to proceed.

“There will be time enough to deal with other issues and oversight of the president’s performance when we take back control of the House of Representatives,” said the Maryland Democrat.

This is what drives liberal Democrats crazy. They interpret the language of Schumer and Hoyer as window dressing, bereft of political punch. But this is the conundrum. Democrats must energize their base for the fall. But swerves to the left aren’t smart in states like West Virginia or North Dakota. That’s where Trump is popular. Sens. Joe Manchin, D-W.Va. and Heidi Heitkamp, D-N.D., face competitive re-election bids. What resonates for Ocasio-Cortez in the Bronx pales in Beckley and Bismarck.

There could be efforts by progressive Democrats to demand votes to rebuke the president or serve as a broadside to his comments. But Schumer doesn’t think that would harm vulnerable Democrats running for re-election this fall.

“This is not a Republican issue or Democratic issue. A red state issue. A blue state issue. This is an American issue. In every state, Americans deeply care for their security,” said Schumer.

As the midterms approach, Republicans are attempting to exploit schisms in the Democratic party. The family separation issue and treatment of migrants inflamed lawmakers on both sides. But Democrats found themselves on the defensive after left-wingers pushed for the abolition of U.S. Immigration and Customs Enforcement (ICE). Rep. Mark Pocan, D-Wis., who co-chairs the House Progressive Caucus, introduced a bill to eliminate ICE.

But Republicans called Pocan’s bluff. House Majority Leader Kevin McCarthy, R-Calif., threatened to weaponize the bill by putting it on the floor for a vote. That’s a dangerous roll call for Democrats just months ahead of the midterms. Either Democrats voted to keep ICE or eliminate ICE. And everyone would know about it.

In the end, the House GOP leadership opted to debate a non-biding resolution to salute ICE, authored by Rep. Clay Higgins, R-La.

“It’s reached the point of dangerous rhetoric,” said Higgins of calls to abolish ICE. “So I called for a response.”

“The Republican leadership thinks they are too cute by half,” said Pocan.

“We’re not falling for this trap,” Hoyer said.

“To vote ‘present’ on this resolution reflects fear,” claimed Higgins.

The Republican Party has long struggled with fractious, internal politics. “Mainstream” GOPers hoped to head in one direction. The conservative Freedom Caucus strayed in another. Republicans nominated multiple Senate candidates in 2010 and 2012 who looked great in the primary, but stumbled in the general. Now Democrats wrestle with the same phenomenon.

Democrats are united in their opposition of Trump. But that’s precisely what could tear them apart.