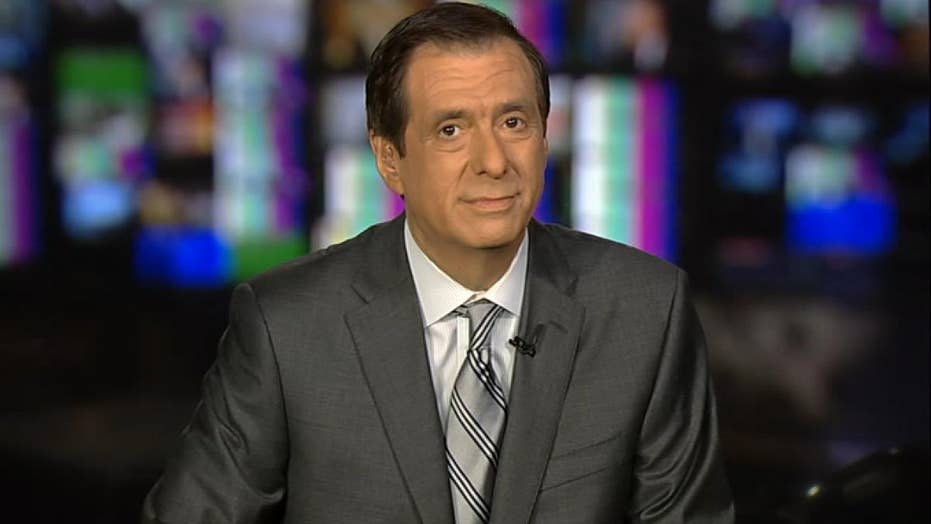 Howard Kurtz: Four years after the escalator, POTUS still playing to his base

As President Trump formally launched his re-election campaign yesterday, many media types reflected on how much he’s changed politics since riding down the golden Trump Tower escalator four years ago.

As President Trump formally launched his re-election campaign yesterday, many media types reflected on how much he's changed politics since riding down the golden Trump Tower escalator four years ago.

And there was another crucial similarity as well.

ICE TO REMOVE 'MILLIONS OF ILLEGAL ALIENS' IN US, TRUMP SAYS

The 2015 kickoff featured Trump saying that Mexico was sending us criminals and rapists, as well as some good people, striking a deep chord with what would become his base and infuriating those who felt he was demonizing illegal immigrants.

This time, the night before Tuesday's Orlando rally, the president tweeted of a crackdown on immigrants. "ICE will begin the process of removing the millions of illegal aliens who have illicitly found their way into the United States," he said, adding that "they will be removed as fast as they come in."

Many expressed their reasons for why they are excited for President Trump and what he’s done for America thus far.

There's no way that "millions" will be deported. But this is basically the same playbook from his entry into politics, and something that Trump has threatened to do before, warning in the past that sanctuary cities would be targeted. And just like the Trump Tower event, it is aimed squarely at his most fervent supporters — and, the media wiseguys would say, does nothing to expand his base of support.

Analysts look at the polls, the ones the president calls fake, and see that in head-to-head matchups Trump isn't above 42 percent, even with a booming economy. Instead, he loses to Joe Biden by 10 points and several other Democrats by lesser margins. (Such surveys are ridiculously early, of course.)

And yet the president is convinced that the polls undercount his supporters and will turn out to be wrong, just like 2016.

A more interesting question is how much the election will turn on Trump himself, who dominates our media and political culture more than any of his predecessors, and in spectacularly divisive fashion.

The New York Times says that November 2020 "is shaping up as a test — not just of the man but of his country. Was Mr. Trump's victory the last time around a historical fluke or a genuine reflection of America in the modern age? Will the populist surge that lifted him to the White House run its course or will it further transform a nation and its capital in ways that will outlast his presidency? What kind of country do Americans really want at this point?"

After all, Democrats have consoled themselves by casting Trump's election as almost an accident. The idea is that he squeaked into office as a popular-vote loser against Hillary's badly flawed candidacy, with an assist from Jim Comey and Vladimir Putin. Biden has called his presidency an "aberration."

BIDEN: DEMS MAY AS WELL 'GO HOME' IF THEY CAN'T WORK WITH REPUBLICANS

But what if that's not true? What if Trump wins a second term? That's more plausible, obviously, for an incumbent president than a celebrity businessman with no political experience. Who would his detractors blame then?

To be sure, Trump capitalized on deep discontent among many Americans unhappy with the culture, the economy and their sense of being ignored. That's why some Obama voters switched to Trump, to blow up the system. It was a sense of alienation that most of the media and political elites failed to fully appreciate.

It was a sea of red under the sweltering sun Tuesday as thousands of Trump supporters, decked out in MAGA-inspired attire, waited outside the Amway Center hours before the president’s arrival.

But has he further divided the country? Says the Times: "There is, of course, something of a chicken-or-the-egg quality to the debate over Mr. Trump — is he the cause of America's polarization or the result?"

And has he transformed the Republican Party, or just turned it into a temporary vehicle of personal support?

Many Americans viewed Ronald Reagan's 1980 win over a hobbled Jimmy Carter as a one-off — how could an actor be president? — until his landslide four years later.

In a similar fashion, some on the left deemed George W. Bush, another popular-vote loser, as an "illegitimate" president after the disputed Florida recount. But that was wiped away by his 2004 victory.

So what happens next year will affect whether Trump is ultimately viewed as a detour from politics as usual or the leader of a disruptive movement.

Footnote: Trump plans to barrel his way into the coverage by live-tweeting next week's Democratic debates, The Wall Street Journal says. That prompted MSNBC's Joe Scarborough to urge all the networks not to report his tweets till the next morning: "Are they going to be manipulated by Donald Trump like we've all been manipulated for three years?"

But can you really stop the networks from reporting what is news?