EXCLUSIVE: Michigan Gov. Gretchen Whitmer is going on offense against mounting protests rocking Lansing over her strict stay-at-home orders – saying she will not apologize for protecting people’s health during the coronavirus pandemic and alleging there are political undercurrents rippling through the demonstrations.

Whitmer, a Democrat who earlier this month extended her austere stay-at-home order until at least May 28, said in an interview with Fox News that while people have a right to protest, she believes the demonstrations have now morphed from protests against the lockdown into something more partisan.

“There is a lot of politics at play here, unfortunately,” Whitmer told Fox News. “The protests are very political in nature instead of being focused on the stay-at-home order.”

She added: “But I’ve been focused on doing my job, and I’m going to keep doing that and I’m not going to apologize about that. I’m not changing the way I run this state because of some protests.”

'I’m not changing the way I run this state because of some protests.'

Whitmer announced in April an expansion to her state’s stay-at-home orders, which, among other things, prohibit residents from visiting family or friends with exceptions for providing care, ban public and private gatherings regardless of size or family ties, and place restrictions on what types of businesses may operate and in what capacity.

She has since eased some of the restrictions -- including now opening retail businesses, some restaurants and bars and some offices in the state's Upper Peninsula and Traverse City regions. But she has also extended her order until the end of May and vetoed a bill that would have limited her powers – leading two GOP state lawmakers to file a lawsuit to compel her to reopen the state's economy and prompting a number of law enforcement agencies across the state to announce they would not impose Whitmer’s orders. 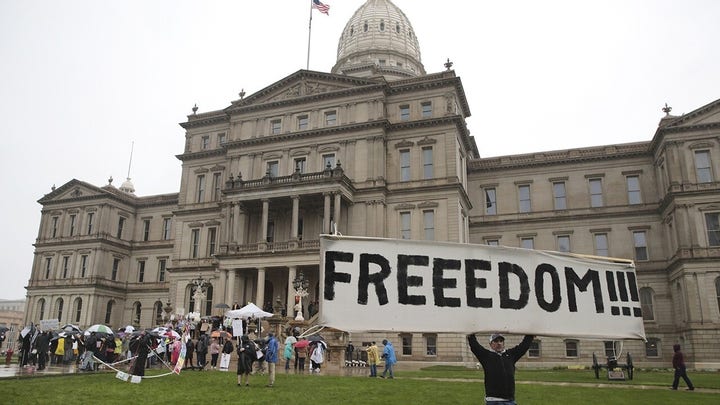 "We’ve attempted to partner with our governor, but she’s rejected," Michigan House Speaker Lee Chatfield, a Republican, tweeted. "We offered cooperation, but instead she chose court. This was avoidable, but today we filed a lawsuit in our state to challenge her unconstitutional actions. The law in Michigan is clear, and nobody is above it."

The protests against Whitmer’s orders began in mid-April when thousands of cars and trucks descended on Lansing to cause traffic jams around the Capitol – as drivers voiced their anger at the economic chaos being wreaked on the state as businesses were forced to shutter from the start of the pandemic.

Since then the protests have become a near-weekly occurrence in Lansing and caused state lawmakers from both parties to voice their concerns about both the public health issues of mass gatherings during the pandemic and the threat of violence that has accompanied some rallies.

While the protests have gone off generally without incident, Whitmer – and some state lawmakers from both parties – have raised concern about some of the demonstrators carrying assault weapons. A 32-year-old Detroit man was also recently arrested for allegedly making death threats against Whitmer and state Attorney General Dana Nessel over the COVID-19-related restrictions.

“The threats of violence are very real and no one in public life should be subject to that,” Whitmer said. “With everyone from local leaders to my calls with the White House, I’ve asked if we can all please do whatever we can to bring down the heat.” 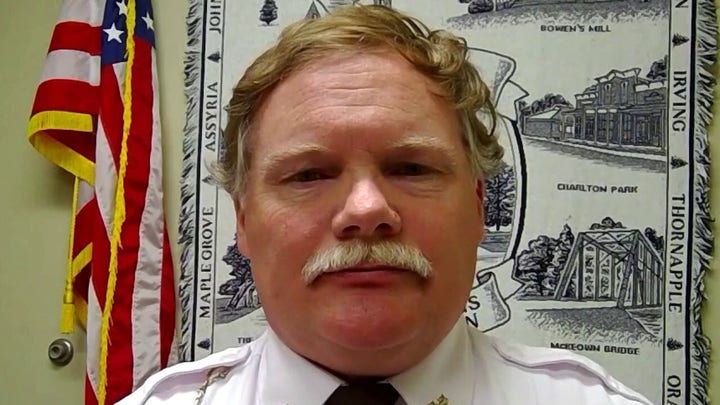 Any help “to bring down the heat” from the White House, however, seems unlikely as President Trump has given his tacit support to the demonstrators – tweeting “Liberate Michigan” as the protests kicked off in April before a more diplomatic social media post earlier this month where he called on Whitmer to “make a deal” with her constituents.

“The Governor of Michigan should give a little, and put out the fire,” Trump tweeted. “These are very good people, but they are angry. They want their lives back again, safely! See them, talk to them, make a deal.”

Whitmer said that while she has had support from the White House in terms of receiving personal protective equipment and supplies that health care workers need to combat the contagion, she has not had the same support when it comes to easing the unrest in her state. She insisted, however, that despite what the protesters think, Michigan is in the midst of reopening.

“We in the third phase of a six-phase process to bring life back to normal,” she said. “But we have to be careful as we’ve had a really bad experience with COVID-19.”

As of Monday, more than 51,000 confirmed cases of the disease had been reported in the state with almost 4,900 deaths. Wayne County, which is home to Detroit, has over 2,200 deaths – making it the fifth-biggest county in the U.S. in terms of deaths, behind only some in New York and Illinois’ Cook County, according to the Center for Systems Science and Engineering (CSSE) at Johns Hopkins University.

There have been persistent rumors that the protests, which have been organized by the Michigan Conservative Coalition, are less in response to the stay-at-home orders and more meant to sully Whitmer’s reputation as her name gets thrown around as a possible running mate for presumptive Democratic presidential nominee Joe Biden. 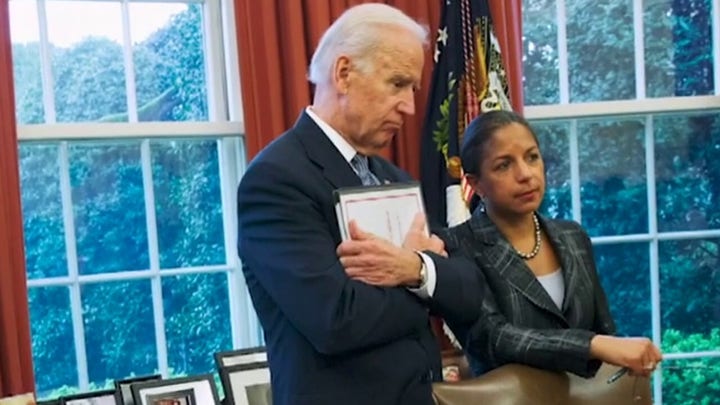 Whitmer, however, brushed off both the rumors and the speculation that she could join Biden’s ticket – saying that her main focus at the moment is keeping Michiganders safe amid the public health crisis.