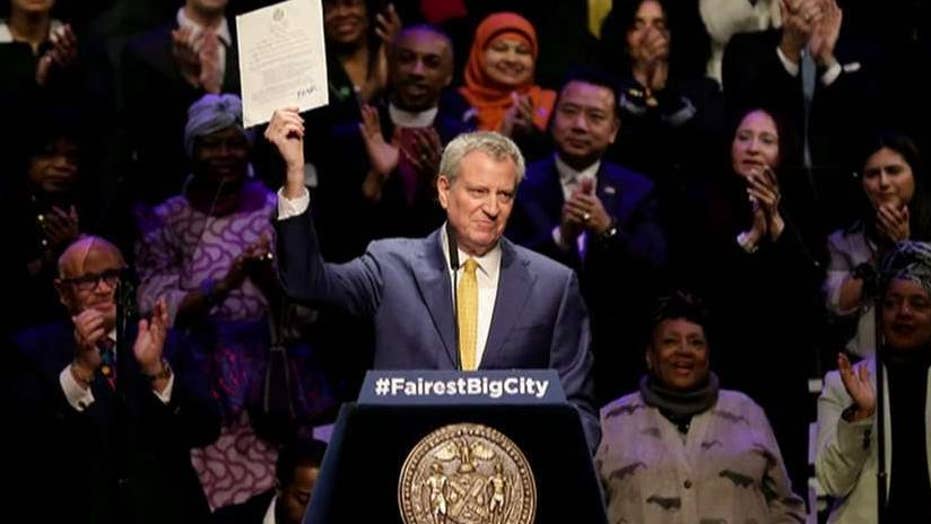 New York City Mayor Bill de Blasio got some laughs -- though not for the reasons he expected -- when a top labor union played his video message to a crowd in Iowa on Wednesday.

The 2020 hopeful sent a video message because he couldn't make it to a labor forum held by the AFL-CIO's Iowa Federation of Labor. When it played, the audio sounded abnormally high-pitched, prompting Washington Post reporter Matt Viser to crack that the mayor "sounded like he’d gulped a canister of helium."

Whoever was operating the video equipment appeared to try and fix the audio as viewers could see a mouse pointer moving across the screen and a box popping up over de Blasio's face.

DE BLASIO CONTINUES FEUD WITH TRUMP, SAYS 'HE WILL NOT BE WELCOME BACK' IN NYC AFTER PRESIDENCY

It's unclear what caused the apparent malfunction but the 2020 hopeful's high-pitched voice prompted audible laughter from the audience.

Campaign spokesman Olivia Lapeyrolerie blamed a "technical glitch" when reached by Fox News, writing in an email: "It was obviously a technical glitch. I cannot believe you a [sic] writing a story on this."

The mayor also seemed to make light of the incident, tweeting that he would make a "less entertaining" video available.

The AFL-CIO later announced it would re-play the video, with an event host saying: "You all deserve to hear the Mayor speak in his own voice."

Wednesday's flub came after a group of New Yorkers descended on the Iowa State Fair to mock de Blasio with fake dollar bills.

“I said to myself, 'This guy’s wasting millions of dollars in taxpayer money to run for president when ... nobody supports him,'” group organizer Mike Fischer told the New York Post. “So we may as well print up dollar bills and hand it around and maybe he’ll get it.”

The funny money has de Blasio’s face in the middle and bears the phrase “In Bill we trusted in Iowa he fails New Yorkers.”

The phony notes are mostly modeled after the $1 bill, although the top reads: $1,000,000 taxpayers money spent on run for president.” Other jabs include "61,000 New Yorkers homeless."