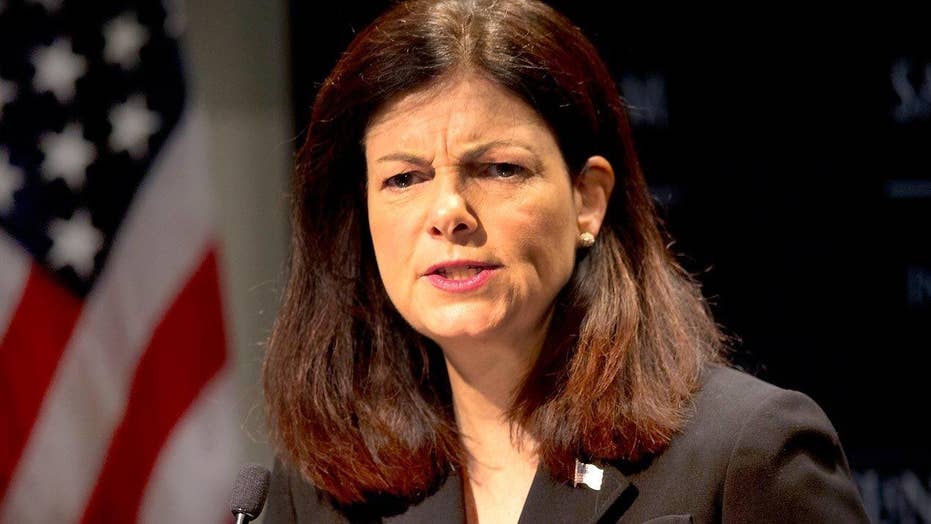 Sen. Kelly Ayotte in fight of her political life

“Chad, this is bad,” a GOP source said after lewd comments about women by Republican presidential nominee Donald Trump were made public Friday night. “We’re going to have to re-evaluate everything.”

The “everything” speaks to the profuse concern Republicans harbor about what Trump’s comments could mean for down-ballot House and Senate contests.

For months, many congressional Republicans sought to distance themselves from Trump -- even if they tacitly endorsed him.

Freshman GOP Sen. Kelly Ayotte, in a tough reelection bid in New Hampshire, for example, said Saturday that she would not vote for Trump.

Ayotee, in a deadlock with Democratic challenger Maggie Hassan, New Hampshire’s governor, has said she supports Trump but has never endorsed him. But until this weekend, Ayotte said she would vote for Trump.

“I cannot and will not support a candidate for president who brags about degrading and assaulting women,” Ayotte tweeted.

That advice is even more resonant now. But before the leaked Trump tape, Democrats were already devoting an ad blitz trying to tie vulnerable Republican congressional candidates to Trump.

We’ll know soon if voters distinguish between Trump and other Republicans -- or if voters just lump everyone together.

That Trump would also attend the event was entombed way down in the third paragraph, perhaps suggesting some third-rate hanger-on also wanted to make the scene.

Talk about burying the lede.

The release then instructed reporters to contact “the Trump campaign” with questions about the nominee’s appearance.

Did you ever feel like you were unwelcome someplace?

If Trump, a first-time candidate, didn’t get the message from Ryan when the release went out, he surely got it when Ryan personally dumped Trump from this weekend’s Badger State confab and replaced him with Republican vice-presidential nominee Mike Pence.

(Pence on Saturday cancelled his appearance at the event.)

Ryan has worked for months to protect himself -- and parts of the party – from the Donald Trump Superfund site.

The speaker called out Trump last December, saying the nominee’s remarks about Muslims were the “textbook definition of a racist comment.”

It’s a measure to protect sexual assault survivors. Friday afternoon, Ryan’s staff sent out a picture of the speaker prepping the bill for Obama to sign alongside co-sponsor Rep. Mimi Walters, R-Calif.

“With this bill, Congress helps gives a voice to the voiceless. Because victims of sexual assault deserve full protection under the law -- and this legislation reaffirms the fact that their right to justice is unconditional,” Ryan said.

Rep. Jason Chaffetz, R-Utah, declared after the tape was released that he wouldn’t vote for Trump. So did Sen. Mike Lee, a fellow Utah Republican who called for a new nominee.

But many congressional Republicans tried to “split the atom.” They condemned Trump’s remarks in the harshest of terms but went silent when asked whether they would still support the nominee or vote for him.

Many congressional Republicans fear a backlash from Trump’s core base if they formally repudiate him and his comments. There’s also not a lot they can do at such a late date.

Rep. Martha Roby, R-Ala., did not take such an approach.

“The best thing for our country and our party is for Trump to step aside and allow a responsible, respectable Republican to lead the ticket,” she said. “Hillary Clinton must not be president. But with Trump leading the ticket, she will be.”

North Carolina is of special interest because of its mix of highly-educated female voters and regular church-goers.

The Trump fiasco unfolds at perhaps the most-critical temporal marker in the campaign. Either the die is cast right now or a last-minute trend emerges to sway congressional elections.

Consider where congressional races stood just as the Trump tape appeared. Republicans were poised to lose a few seats in the House but maintain control. The Senate was still anybody’s ballgame.

The current breakdown in the House is 246 Republicans to 186 Democrats with three vacancies. Democrats need to capture 30 seats to return to the majority for the first time since early 2011.

Few experts thought there was a pathway for Democrats to regain the low chamber this cycle, despite the opportunity to face Trump, whom they wanted to campaign against.

But the fact that the House hasn’t been in play attests to the fortification of the firewall House Republicans erected when they won the majority in 2010.

Republicans won hundreds of down-ballot contests that year at the state level, the same year as the decennial Census.

Those state-level races determine who redraws congressional districts following the Census. As a result, Republicans constructed a fort, contouring the congressional lines in favor of their candidates in most places across the country.

Key GOP seats to watch include those of freshman Iowa GOP Reps. David Young and Rod Blum. Both are fairing well because Trump is competitive in the state.

The same with Rep. Daniel Webster, a Florida Republican who mounted what some viewed as a Quixotic bid to become House speaker last year. Webster is running in a new congressional district.

Democrats are expected to lose the seat of retiring, one-term Florida Rep. Gwen Graham. But they think they might not lose any sitting members running this fall.

Ashford is a freshman who flipped his Omaha district from red to blue two years ago.

Bera’s 83-year-old father went to jail earlier this year for illegally donating money to his son’s campaign. Nolan narrowly defeated GOPer Stewart Mills two years ago and faces him in a rematch. Trump fares well in rural areas of Minnesota’s Iron Range, the heart of this district.

Michael Barone penned a July 1994 article in U.S. News and World Report that predicted the possibility of a Republican sea-change in that year’s midterm. But most handicappers didn’t buy it until mid-October.

Republicans reclaimed the House in 1994 for the first time in 42 years.

And few saw a wave until October when Democrats captured the House in 2006.

The Senate still could be a photo-finish.

The upper chamber breakdown is now 54 Republicans to 44 Democrats. Two independent senators caucus with the Democrats, so it’s essentially 54-46.

Control of the Senate remains a dead-heat with five states listed in the toss-up category according to Sabato’s Crystal Ball, the weekly newsletter compiled by political analyst Larry Sabato at the University of Virginia.

Sabato suggests Illinois and Wisconsin as probable pickup states for Democrats. But Democrats need to win three more for outright control. And they must hold the Nevada seat of retiring Senate Minority Leader Harry Reid while defeating a combination of Toomey, Burr, Ayotte Marco Rubio in Florida, and Roy Blunt in Missouri.

Democrats are also in a neck-and-neck race to acquire the seat of retiring GOP Sen. Dan Coats in Indiana.

Rep. Joe Heck, R-Nevada, the GOP candidate for Reid’s seat, is slightly ahead in the race.

Heck, who notably endorsed Trump in a state in which the Hispanic Republican governor has yet to endorse the nominee, on Saturday publically called on Trump to step down.

Rubio is way in front. Democrat Jason Kander has made things a contest against Blunt in Missouri. Burr is showing some signs of a struggle against Democratic challenger Deborah Ross.

Burr’s race could be key as Democratic presidential nominee Hillary Clinton assumed a lead in the Tar Heel State.

That’s bad news for Burr. North Carolina voters almost always align their ballots for president and Senate. Only once have they divided their votes for those offices: 1968.

If Heck flips Reid’s seat in Nevada, Republicans need to hold three of the remaining five competitive Senate races. Rubio boasts a healthy lead. So it could come down to the GOP incumbents in Missouri, New Hampshire, North Carolina and Pennsylvania.

This is why it was such a big deal for Democrats to court former Sen. Evan Bayh to run against Rep. Todd Young for Coats’ open seat. Indiana was expected to be a lay-up for Republicans without the Democratic recruiting coup of Bayh.

Conventional wisdom is that whichever party secures the presidency wins the Senate by fiat. That’s because the vice president, who simultaneously serves as president of the Senate, would preside and break ties.

But it’s more complex than that. The 1881, 1953 and 2001 Senate tie scenarios all featured senators forging some form of a power-sharing agreement. Considering the toxicity of today’s political climate, it’s unknown if leaders could craft a pact to manage the show on Capitol Hill.

We may not know which party controls the Senate for days if not weeks following the election due to recounts and challenges in nip-and-tuck states.

Regardless, the political ground could be shifting right now. If there’s a late break in favor of Democrats in congressional contests, this is the point in October when it’s going to happen. And the Trump tape presents that opportunity.