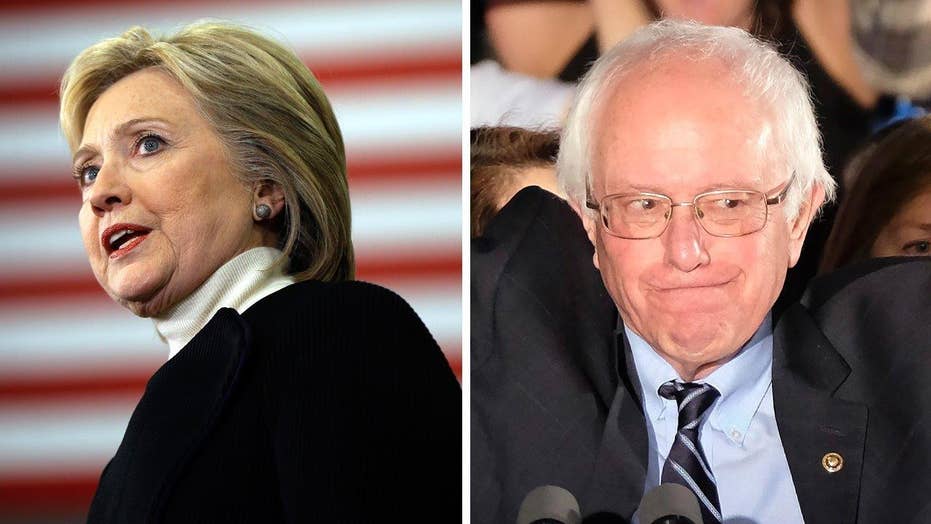 Can Clinton win back supporters from Sanders?

NORTH CHARLESTON, S.C. – Using the grassroots strategy that worked for him in Iowa and New Hampshire, Bernie Sanders is betting that issues rather than name recognition will help him win over South Carolina's minority voters -- once considered Hillary Clinton's "firewall" against a serious presidential challenge.

And, with the primary still more than a week away, black voters in the state appear to be giving the lesser-known Democratic presidential candidate a chance to speak to the issues that matter most to their community.

“In the South, it has never been about name recognition,” Wendell Gilliard, a state lawmaker and black Democrat, told FoxNews.com. “Sanders has a grassroots message that connects with grassroots people. That’s what counts in South Carolina. … Vivica Fox, Angela Bassett and other movie stars can campaign for Hillary. But I still feel the Bern.”

Clinton, to be sure, is taking nothing for granted. After Sanders met last week with Al Sharpton in New York, Clinton also was meeting Tuesday with civil rights leaders in Harlem and delivering a speech on racial injustice.

But there is a political maxim that holds candidates must visit the “barbershops, beauty salons and bible studies” to hear what issues really matter to people, especially black voters.

And there, the Democratic race is still very much up for grabs.

In North Charleston, S.C., where nearly 50 percent of the population is black, and poverty and jobless rates exceed the national levels, the Diamond Cutz Barber Salon is known as the spot where locals come to get a trim and talk politics. Two weeks before the state’s Feb. 27 Democratic primary, the scene was more like a town hall, with the barbers and customers talking shop about the candidates and issues.

“If candidates are going to reach out to black voters, they have to reach out to the black youth,” said 37-year-old Shawn Seymour. “They are the ones who really need the help.”

Seymour seemed to lean Clinton while his barber, Robert McFadden, appeared more intrigued with the lesser-known Sanders and his concerns about women’s rights and LGBT issues.

Neither was willing to fully commit nor seemed impressed by either candidate’s growing list of endorsements, including rapper Killer Mike for Sanders.

“Killer Mike hasn’t dropped an album in years,” the 35-year-old McFadden said over the low hum of his electric clippers.

Both argued blacks too often feel like election-year pawns and candidates don’t realize the needs of the black community are unique.

“Politicians only come to the black folks when they whine or complain or want black votes,” Seymour said, “like my granddaddy used to say.”

Both seemed resigned to the fact the election will do little to help the local community, like homeless people now living in a tent city in downtown Charleston.

“There are some issues that are solely black,” McFadden said. “We want jobs.”

Hours later, in a debate with Clinton, Sanders acknowledged the black community has tremendous problems -- including poverty and over-incarceration -- but still described them as part of a “general economic issue.”

Clinton’s southern state polling lead remains substantial, despite her loss in New Hampshire last week. Recent polls show she has at least a 50-point lead over Sanders among black voters in South Carolina, who account for the majority of the state’s Democratic electorate.

However, Sander has steadily cut her overall lead in the state, from its 58-point high in September to roughly 25 points.

Clinton indeed has close ties to the black American community, dating back to husband Bill’s terms as Arkansas governor and U.S. president. However, much of that support abandoned her for Barack Obama in their 2008 South Carolina primary battle, which Obama won by a landslide.

Her husband was dismissive of the outcome, which resulted in Hillary Clinton eventually apologizing.

Time appears to have healed those wounds. Clinton had an 80-percent favorability rating among African-Americans, according to a Gallup poll last summer. And she has increasingly tried to tie herself to Obama, while insisting she’s not running for “Obama’s third term.”

'In the South, it has never been about name recognition'

Among them is state Sen. Marlon Kimpson, whose district encompasses where Walter Scott was fatally shot last spring by a police officer in North Charleston and the downtown Charleston church in which nine black parishioners were gunned down in June.

Kimpson praised Clinton for “immediately” seeking tighter gun laws. “She didn’t wait around like a lot of other politicians,” he said. “My constituents appreciated that. … It’s what led me to endorse her.”

Sanders has won his own key endorsements, including from former NAACP leader Ben Jealous and South Carolina state Rep. Justin T. Bamberg, a former Clinton supporter and lawyer for the Walter Scott family.

College of Charleston politics professor Kendra Stewart said the endorsements that really matter in South Carolina are those of Bamberg and 12-term Rep. James Clyburn, the most influential Democratic lawmaker in the state, who still remains neutral in the race.

“Bamberg’s was a signal that not all black voters have to support Hillary,” Stewart said. “It said you’re going to have to work for that vote.”

Sanders' grassroots efforts in South Carolina include radio ads specific to potential black voters and paying some canvassers and event hosts the $15-an-hour minimum wage that he has proposed, in addition to visiting churches and barber shops.

The Rev. Isaac J. Holt Jr., senior pastor of the influential Royal Missionary Baptist Church in North Charleston, told FoxNews.com that Sanders already has been to his church -- about a mile from where Scott was fatally shot -- and that Clinton intends to visit.

“What we try to do is present the candidates so every member can make an intelligent choice,” he said, noting he and the church do not make endorsements.

He said his congregation includes Republicans and suggested he personally feels let down by the candidates.

“They’re so beat up,” he said Friday. “Democrats say what black churches want to hear. And it’s so much about personality that it’s hard to know what they think. What’s really missing is the enthusiasm.”