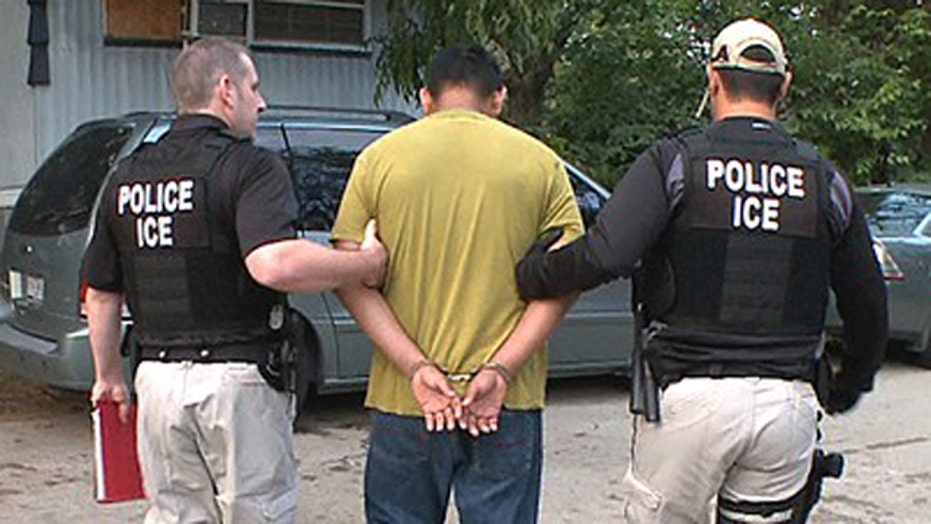 WASHINGTON – Federal agents in a sweep targeting the most dangerous criminal immigrants arrested 15 people who have been allowed to remain in the U.S. under President Barack Obama's executive action intended to protect children who came to the U.S. years ago with their parents, The Associated Press has learned.

Fourteen of the 15 had been convicted of a crime, the Homeland Security Department confirmed late Thursday. In at least one case, the Obama administration renewed the protective status for a young immigrant after that person's conviction in a drug case, a U.S. official briefed on the arrests said.

One of the eligibility requirements for the program is that immigrants not have a criminal history. The official spoke on condition of anonymity because this person was not authorized to discuss the matter by name.

It was not immediately clear when 13 of the immigrants were convicted or what their crimes were. They were arrested by U.S. Immigrations and Customs Enforcement. The answers to those questions could undermine the integrity of the government's program, since eligibility is reserved for ambitious, young immigrants enrolled in school or who graduated and who would benefit American society.

None of the names of the immigrants was disclosed. One of the young immigrants arrested hadn't been convicted of a crime, but was arrested after being found armed with a gun, the official said.

Homeland Security spokeswoman Marsha Catron said eight other people arrested during the sweep had received the protective status at one point, including three who had it revoked. Catron did not provide additional details.

Under the program, known as Deferred Action for Childhood Arrivals, or DACA, more than 675,000 young immigrants since August 2012 have been granted a work permit and reprieve from deportation.

Goodlatte, R-Va., and other Republicans have long decried Obama's executive immigration as a form of backdoor amnesty that circumvents Congress.

Senate Judiciary Committee Chairman Charles Grassley, R-Iowa, said the case "sheds light on what appears to be a haphazard and risky vetting process by an administration that is very interested in finding creative and possibly unconstitutional ways for people to stay in the country."

Catron said U.S. Citizenship and Immigration Services "is examining these cases to determine the appropriate course of action, which may include a denial or termination of deferred action."

The sweep also captured five immigrants with protective applications pending and 19 others who had already been denied protection from deportation under the program.

Earlier this week ICE Director Sarah Saldana said the operation focused on "the worst of the worst criminals."

"This was a targeted enforcement operation, aimed specifically at enhancing public safety," Saldana said. "It exemplifies our core mission, by taking dangerous criminals off the streets and removing them from the country we are addressing a very significant security and public safety vulnerability."

ICE agents arrested 2,059 convicted immigrants, including more than 1,000 people who had multiple convictions. More than 98 percent of those arrested in the weeklong operation were a top priority, Saldana said.

Homeland Security Department documents say participation in the program can be revoked at any time. U.S. Citizenship and Immigration Services, which approves applications, reported to the House Judiciary Committee last year the government stripped that protection from 113 people as of August. The revocations included one case of gang membership, one aggravated assault, 11 driving-under-the-influence cases and 11 errors by USCIS, according to the committee.

Obama's planned expansion of the protection programs has been put on hold by a federal judge in Texas presiding over a lawsuit filed by 26 states to stop the effort. In February Judge Andrew Hanen temporarily blocked the expansion plans, which included granting protections and work permits to parents of U.S. citizens and legal permanent residents. On Thursday the U.S. government asked an appeals court to lift the temporary hold on the expansion.