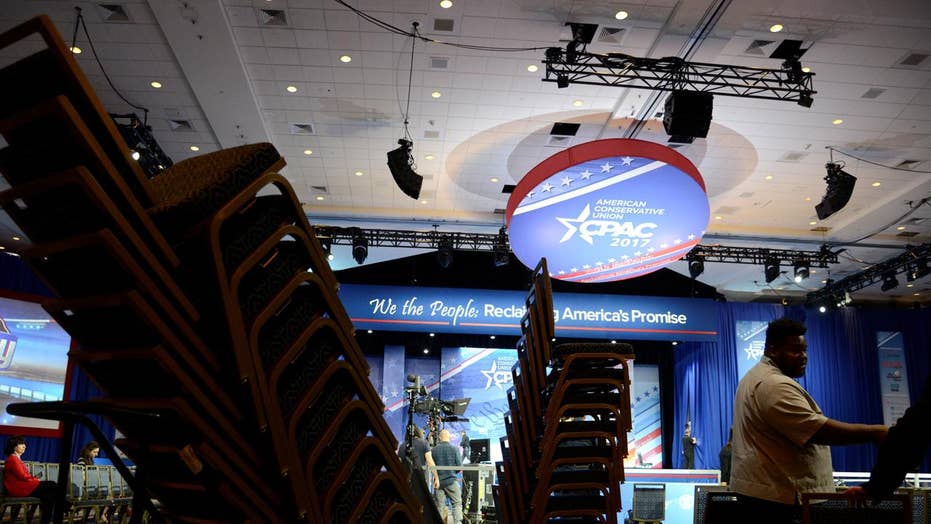 For the last eight years, conservatives used their signature annual gathering to blast the Obama administration and plot a Republican takeover. Now, the GOP is in charge -- and this week’s Conservative Political Action Conference is the movement’s first big chance since President Trump’s victory to hone their agenda.

“The conservative movement has elected a Republican president,” American Conservative Union Chairman Matt Schlapp said Wednesday, at the start of the annual conference, which his group sponsors. “It’s not so much now about complaining about President Obama’s agenda as it is about what we’ll do with political power and the responsibility to get the economy moving.”

Leaders are hoping to use the conference to strategize about what they can accomplish now that Republicans control Capitol Hill and the White House and to better articulate their values at a time when the very definition of conservatism has seemed to waver.

The conference at National Harbor, just outside Washington, D.C., will feature a host of lawmakers and officials -- including top White House advisers and Vice President Pence on Thursday, and President Trump on Friday morning.

White House Counselor Kellyanne Conway predicted Thursday morning that the energy surrounding the new president is so intense, “tomorrow it will be TPAC when he’s here.”

During her remarks on the CPAC stage, Conway lauded her boss’s ability to make supporters feel like they’re part of a movement.

“He went right to the grassroots and brought you along,” she said.

But much of the buzz around the four-day event has centered on CPAC organizers pulling the speaking slot of “alt-right” provocateur Milo Yiannopoulos, after the release of an audio tape in which he made what Schlapp called “disgusting” comments.

Yiannopoulos seems on the year-old tape to defend adults having sex with minors. Yiannopoulos apologized this week for the comments and said he had been sexually abused as a teen.

Schlapp said Wednesday that CPAC invited Yiannopoulos because the backlash he faced for his college talks were part of a large, chilling effect regarding free speech on campus.

The flap highlighted tensions between traditional conservatives and the alt-right, which helped boost Trump’s bid.

The Republican president, with his threats to void or renegotiate international trade deals and his interest in a multi-billion-dollar infrastructure package, is not exactly a prototype conservative.

But Schlapp said conservatives hope to hear him say, “I know you all did a lot to get me elected,” and perhaps after the four-day event better understand “what they care about.”

The attendance of Trump, the first president since Ronald Reagan to visit CPAC in a first term, has indeed brought some energy to the 44-year-old event.

But other scheduled speakers and events -- including the speech by Pence and a one-on-one Thursday between White House Chief of Staff Reince Priebus and Trump strategist Steve Bannon -- are also attracting a lot of interest.

Bannon and Priebus are reportedly involved in a White House power struggle but say they get along.

Yiannopoulos had worked for Bannon at Breitbart News before Bannon stepped down and Yiannopoulos resigned in the wake of the scandal.

The event concludes Saturday with the annual CPAC straw poll, an early indication of which potential White House candidates have  conservative support.