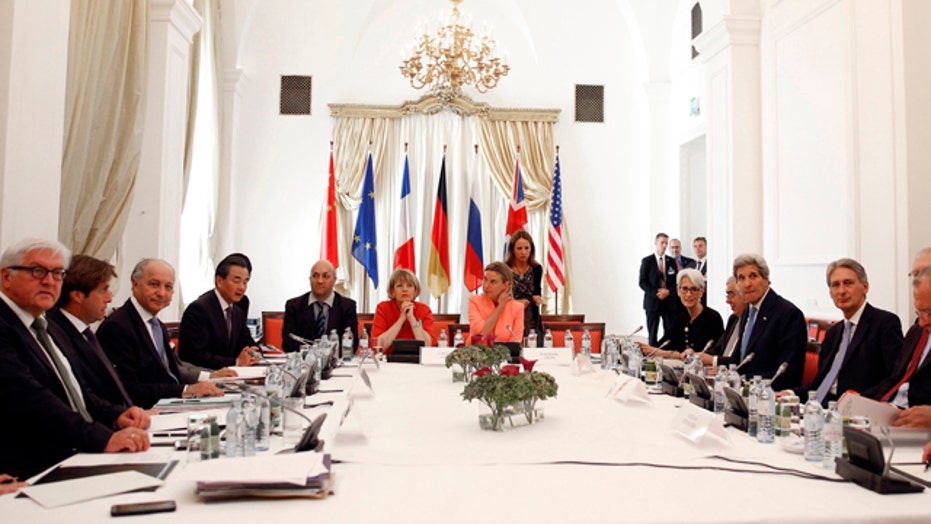 Negotiators at an impasse on difficult issues

Time is running out for U.S. negotiators trying to strike a nuclear deal with Iran. Not only are they racing to meet a self-imposed Tuesday deadline, but even if that slips they'll run against a hard deadline Thursday that Congress set earlier this year.

Whether the U.S. and five other world powers can reach any agreement remains to be seen. Secretary of State John Kerry said Sunday that diplomatic efforts "could go either way."

Talks were initially extended past a June 30 deadline until Tuesday. Officials, though, already have acknowledged the talks could leak past that deadline, too.

Yet Thursday may be the deadline that matters.

July 9 is the date U.S. lawmakers set for negotiators to complete a deal if they want Congress to review it within 30 days. If an agreement is submitted after July 9, Congress claims the right to take 60 days to review the text -- which could push a final congressional vote on the plan until September, leaving any agreement in limbo until then.

A senior administration official, speaking with reporters on Friday, played down the July 9 deadline but admitted they'd prefer to get a deal in hand before then.

Already, the House Foreign Affairs Committee has set a hearing on the matter for Thursday, beginning the process of reviewing a potential deal. Whether that timeline is 30 or 60 days depends on when and if it comes in.

"This hearing will be the first in a series the Committee will hold should the Administration strike what might be one of the most significant agreements in decades. As I have said, no deal is far better than a bad deal," committee Chairman Ed Royce, R-Calif., said in a statement.

Diplomats from all six nations were back in Vienna Monday for the presumed final leg of talks.

The EU's top foreign policy official, Federica Mogherini, said agreement was "very close." But Kerry said there was still a ways to go.

"We are not yet where we need to be on several of the most critical issues," Kerry told reporters outside the 19th-century Viennese palace that has hosted the negotiations.

World powers and Iran are hoping to clinch a deal soon, setting a decade of restrictions on Iran's nuclear program and granting Iran significant relief from international sanctions.

Kerry met for 3 1/2 hours on Sunday with Iranian Foreign Minister Mohammad Javad Zarif, as top diplomats from the five other negotiating countries planned to return to Austria's capital later in the evening.

"It is now time to see whether or not we are able to close an agreement," Kerry said.

While "genuine progress" had been made and the sides "have never been closer, at this point, this negotiation could go either way. If the hard choices get made in the next couple of days, and made quickly, we could get an agreement this week," Kerry said. "But if they are not made, we will not."

The talks had appeared to be moving forward. On Saturday, diplomats reported tentative agreement on the speed and scope of sanctions relief for Iran in the accord, even as issues such as inspection guidelines and limits on Iran's nuclear research and development remained contentious.

"But that shouldn't deceive us," he said. "There's still a possibility that there will be a lack of courage and readiness in crucial points to build the bridges that we need to find to each other."

Tuesday's deadline is the latest that has been set for a comprehensive pact that would replace the interim deal world powers and Iran reached in November 2013. That package was extended three times, most recently on June 30, and Kerry appeared to be partly addressing critics of the diplomacy in the United States  who've argued that President Obama's administration has been too conciliatory over the course of  the negotiations.

Obama and U.S. officials say that is untrue. But they've also fiercely defended their overtures to Tehran and their willingness to allow the Iranians to maintain significant nuclear infrastructure, on the argument that a diplomatic agreement is preferable to military conflict.