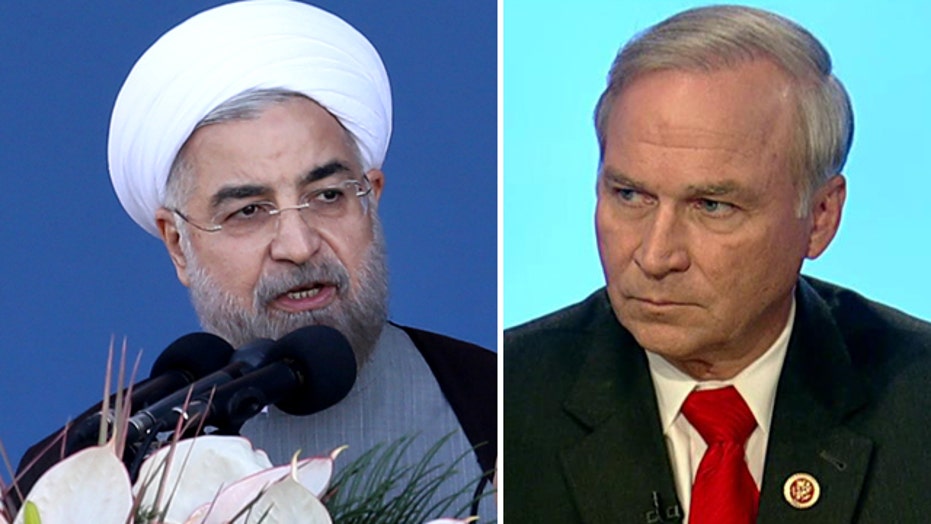 Rep. Forbes 'very concerned' about US negotiating with Iran

Republican lawmakers are raising alarm that Secretary of State John Kerry is putting too much on the table in talks over Iran's nuclear program -- as Tehran reportedly tries to leverage its cooperation in the Islamic State crisis in return for nuclear concessions from the U.S. and its allies.

The White House denies that any such trade-off is in the works.

"The United States will not be in a position of trading aspects of Iran's nuclear program to secure commitments to take on ISIL," White House Press Secretary Josh Earnest said Monday, using an alternate acronym for the Islamic State. "These two issues are entirely separate."

But, even before the Islamic State aspect surfaced, Republicans already had voiced concern that Washington may be softening its negotiating position in the nuclear talks.

In a letter sent to Kerry on Friday, 31 Republican senators expressed grave concerns about the new negotiations.

Warning of "troubling nuclear concessions to Iran," they asked whether the administration would accept the mere "disconnection" of centrifuges as an alternative to dismantling them.

Indeed, as the latest round of talks began at the United Nations on Friday, diplomats told The Associated Press that a new U.S. proposal on the table focuses on removing piping connecting the centrifuges. That would allow the U.S. leeway on modifying demands that Iran cut the number of centrifuge machines from 19,000 to no more than 1,500.

Only a proposal for now, the plan would allow the Iranians to claim that they did not compromise on vows that they would never emasculate their enrichment capabilities, while keeping intact American demands that the program be downgraded to a point where it could not be quickly turned to making bombs.

Top Iranian officials, including President Hassan Rouhani, are in New York this week for the U.N. General Assembly session. Kerry met over the weekend with Iranian Foreign Minister Mohamad Javad Zarif, and emerged saying Washington was intent on advancing negotiations focused on reducing Iran's atomic activities in exchange for an end to nuclear-related sanctions.

Fueling concern among Republicans over the course of the discussions was a Reuters report over the weekend, raising the Islamic State aspect.

Reuters quoted senior Iranian officials saying they want to see more flexibility on the nuclear issue, in exchange for working with the U.S. and its allies to tackle the Islamic State threat.

"Iran is a very influential country in the region and can help in the fight against the ISIL terrorists ... but it is a two-way street. You give something, you take something," one Iranian official told Reuters.

The U.S. and Iran have rejected working together militarily -- and Iran's Supreme Leader Ayatollah Ali Khamenei claimed on Twitter last week that he rejected U.S. appeals with regard to ISIS -- but Kerry on Friday once again opened the door to some kind of cooperation.

"There is a role for nearly every country in the world to play, including Iran, who is present here today," he said during a U.N. Security Council meeting.

Rep. Randy Forbes, R-Va., a member of the House Armed Services Committee, told Fox News that any trade of nuclear concessions for cooperation on ISIS would be "absolutely foolish."

"We're very concerned about Secretary Kerry and any kind of deals he might strike with Iran," Forbes said, adding that the administration should develop an Islamic State strategy that doesn't involve Iran.

But on Friday, State Department spokesman Jeff Rathke stressed that "we've always said that the nuclear issues are separate from actions regarding ISIL." Rathke acknowledged "discussion of this threat did arise on the margins" of discussions over the past week.

According to Reuters, western officials say Iran has not raised the ISIS point in nuclear talks. Further, one unnamed western diplomat told Reuters that the other nations in the discussions do not want to "bring the other subjects to the nuclear negotiations table."

The nuclear talks have been stalled for months over Iran's opposition to sharply reducing the size and output of centrifuges that can enrich uranium both to levels needed for reactor fuel or the core of nuclear warheads. Iran says its enrichment program is only for peaceful purposes, but Washington fears it could be used to make a bomb. Iran says any deal must put an end to the sanctions that have crippled the Iranian economy.

The deadline was extended to Nov. 24 after the sides failed to reach agreement by the end of July.