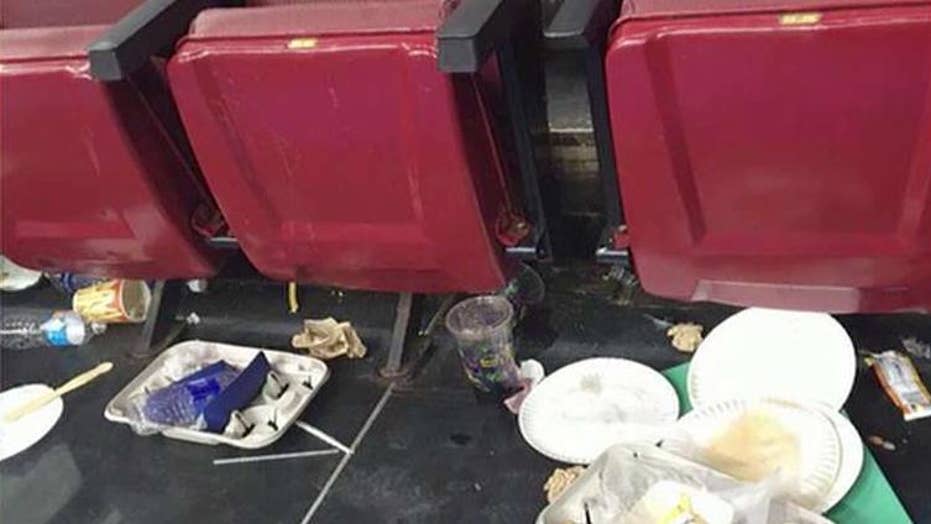 Reporters complaining about dirty conditions on the convention floor

PHILADELPHIA – Tens of thousands of politicians, delegates, reporters and political junkies who have come to this sprawling East Coast city -- amid a relentless heat wave -- to attend the Democratic National Convention are being greeted with traffic gridlock, subway snafus and venues without food or water and piled high with trash.

The headaches surrounding the logistics of the event have served to mar an already turbulent kick-off marked by rowdy protests.

The early arrivers Tuesday at the downtown convention center where the events are being held were met by work crews furiously trying to clean up trash and leftover food including chicken fingers and French fries.

On Sunday night, at a glitzy reception overlooking the city skyline, the conversations among Washington Democrats and K Street lobbyists were as much about convention-related problems as they were about politics.

“Every convention has its memorable problems, but this is a lot,” one lobbyist said.

On Monday, the opening night of the four-day event, the concession stands at the Wells Fargo Center were essentially sold out of water and food before the prime-time speeches even started.

“I waited 40 minutes,” said a customer leaving a register with a hamburger and a soda. “Don’t bother getting in line because there won’t be any food left when it’s your turn.”

Others complaints include shuttle buses across the city that have never arrived, long backups on I-95 into the city, sub-standard hotels and Uber waits after Bernie Sanders’ closing speech late Monday night that lasted more than an hour.

The Democratic National Committee on Tuesday did not immediately return a request for comment.

Visitors also were shocked to learn that they couldn’t swipe a credit card to pay for a $2.25 subway ride on the SEPTA, instead having to cough up cash.

“I’ve been getting yelled at all day,” said a SEPTA booth attendant at the City Hall stop, which has been the staging area for the thousands of Sanders supporters and other protesters.

The protests, including a six-mile march that snarled city traffic, got so raucous Tuesday that police shut down the subway stop closest to the Wells Fargo venue, as demonstrators pushed against the police line and got dangerously close to the delegates and others with official convention passes.

As a result, officials intend to add an extra wall of chain-linked fencing to avoid more problems.

Notoriously critical reporters have been among the most outspoken.

"To be totally objective and nonpartisan: the logistics at DNC are appalling. Squalid hotels, sweltering workspace, no directions. Chaos,” tweeted Megan Liberman, editor-in-chief at Yahoo News.

Tremendous heat and humidity also produced a blockbuster of a thunderstorm Monday night just as the convention speeches were ramping up. A flash flood warning was issued and evacuation orders for the media tents -- which are not designed to withstand lightning strikes -- were also ordered, though few heeded them.