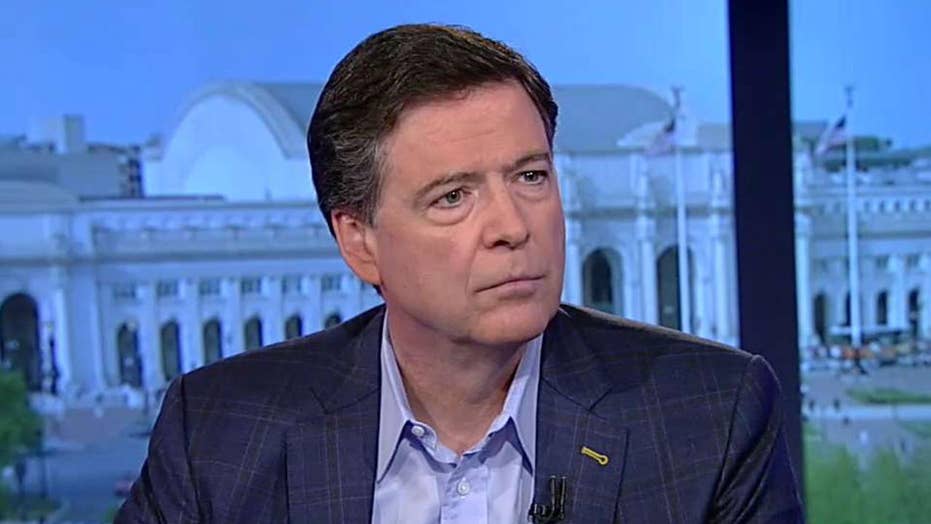 Former FBI Director James Comey, in a wide-ranging interview with Fox News on Thursday, defended sharing his memos about conversations with President Trump with multiple people, while denying it was a “leak.”

“That memo was unclassified then,” Comey told anchor Bret Baier during an appearance on “Special Report.” “It's still unclassified. It's in my book. The FBI cleared that book before it could be published.”

Comey acknowledged giving the memos to at least three people including his friend, Columbia University law professor Daniel Richman. He said he sent Richman a copy of the two-page unclassified memo and “asked him to get the substance of it out to the media.”

Former FBI Director James Comey, author of the new book 'A Higher Loyalty,' opens up in part 2 of his interview with 'Special Report' anchor Bret Baier.

In addition to Richman, Comey said he gave the memos to other members of his “legal team,” including David Kelly and former U.S. Attorney Patrick Fitzgerald.

“I gave the memos to my legal team after I gave them to Dan Richman -- after I asked him to get it out to the media,” he said.

He also claimed the memos were personal, not official.

“I didn't consider it part of an FBI file... It was my personal aide-memoire,” Comey said.

The former FBI director said he kept two copies of the memos, one in his personal safe at home and another one at the FBI.

“I always thought of it as mine, like a diary,” he said.

Comey confirmed that the Justice Department's inspector general has interviewed him about his handling of the memos.

“And I expect a report on them,” Comey said. “Not on the handling of classified information because that's frivolous, but on, ‘Did I comply with policy? Did I comply with my employment agreement?’”

Earlier Thursday, Trump accused Comey of being a “liar and a leaker” who is “guilty of crimes.”

“He leaked classified information to get a special counsel and leaked the memos which are classified – the memos were about me and he didn’t write those memos accurately. He wrote a lot of phony stuff,” Trump said Thursday on “Fox & Friends.”

Comey responded by calling it a “false statement” and saying Trump is “just wrong.”

“Facts really do matter, which is why I'm on the show to answer your questions,” he said.

Comey also denied knowing who was behind the leak about the infamous anti-Trump dossier that was later revealed to have been used to obtain a surveillance warrant for former Trump campaign aide Carter Page. Comey also claimed he never knew exactly who funded the dossier.

Asked when he learned that the DNC and Hillary Clinton campaign funded Steele's work, Comey said: “I still don't know that for a fact.”

He went on to say, “I have only seen it in the media. I never knew exactly which Democrats had funded.”

Asked about FBI employees Peter Strzok and Lisa Page – whose anti-Trump text messages have been seized upon by Republicans -- Comey said he would have “removed both of them from any contact with significant investigations” had he been aware of the texts.

“It was such poor judgment,” he said.

Pressed on whether Strzok and Page's work should be questioned, Comey acknowledged, “It’s a reasonable question to ask.”

“And I can tell you this. When I saw the text, I was deeply disappointed in them,” he said. “But I never saw any bias, any reflection of any kind of animus towards anybody.”

Comey is doing television interviews to promote his new book, “A Higher Loyalty: Truth, Lies, and Leadership,” in which he blasted the president for everything from his integrity to his height, skin and hair.

During his earlier interview on Fox News on Thursday, Trump specifically slammed the memos that Comey leaked to Richman to spur a special counsel appointment.

Fox News reported this week that during Comey's time at the FBI, Richman was a “special government employee” on an unpaid basis. Sources familiar with Richman’s FBI work said Comey assigned him to “special projects.”

On Thursday, Comey was asked why he didn't reveal hiring Richman as a special government employee for the FBI. Comey responded, “It wasn't relevant.”