A member of the Democratic National Committee resigned Wednesday after referring to African-Americans as “colored people” during a party meeting.

John Parker, a Duval County (Fla.) Democratic state committeeman, apologized for what he described as a “hurtful” term and announced his immediate resignation.

“I understand my error perpetuates divisiveness and does not allow us an opportunity for the important types of meaningful discourse — a conversation our party must engage in sooner rather than later — that help us grow as individuals and a party protecting the dignity of all people,” he said in a statement, Politico reported.

“I take responsibility for my mistake and as such is the impetus of my decision,” he added. “I resign for the good of my Party and all those who are fighting so hard for a better world than the one we are in now.”

“I resign for the good of my Party and all those who are fighting so hard for a better world than the one we are in now.”

The uproar came at a time when Florida's Democrats are trying to mobilize voters for this year's elections -- when the state will choose a new governor. Duval County, where the majority of registered Democrats are African-Americans, is seen as an important voter base for challenging Republicans.

Multiple Democratic Party officials, including Parker’s wife, and African-American activists condemned Parker and called upon him to resign after his offensive remarks were reported.

“While I know John does not have malice in his heart, and has learned from this experience, he has lost the confidence of many of us to continue to serve in his leadership positions,” she said.

The now-former DNC member insisted he meant to say “people of color” rather than “colored people” at a party meeting at a Jacksonville restaurant in January. “I am confident that a full investigation would have shown that I erred with my mouth, not my heart,” Parker wrote in the letter.

“I am confident that a full investigation would have shown that I erred with my mouth, not my heart.”

But some claim Parker’s remark wasn’t just a blip. Diallo-Sekou Seabrooks, head of the Black Commission in Jacksonville, told First Coast News that Parker “freely used” the phrase “colored people” at the meeting and was concerned that the city could start resembling Atlanta, a city with a majority-black government.

"Why would you still think that 'colored' was cool? Because to me, it's a Jim Crow terminology and it's unacceptable," Seabrooks told the outlet.

State Rep. Kimberly Daniels, D-Jacksonville, alleged Parker used racial language and has made other “disgraceful comments” in the past.

“Preceding this instance, he allegedly referred to the Working People Caucus as the ‘Poor Black People Working Caucus' and called a constituent the 'mayor’s mammy,'" Daniels said in a statement on Monday. 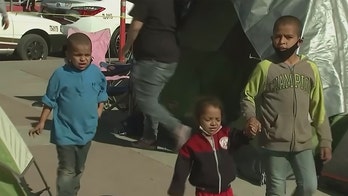