U.S. activist Medea Benjamin, co-founder of the antiwar group Code Pink, second from right, and others, sing together outside the Venezuelan Embassy in Washington on Thursday. Supporters of interim government opposition leader Juan Guaido have blocked the entrances to the embassy, cutting off supplies to backers of embattled leader Nicolas Maduro supporters occupying the building. (AP Photo/Andrew Harnik)

Liberal activists from the anti-war group Code Pink are refusing to leave the abandoned Venezuelan embassy in Washington, vowing to protect the building from a “hostile takeover” as the U.S. State Department labels them “trespassers” and calls on them to leave.

About 50 pro-regime activists have been living inside the building for several weeks in support of embattled socialist President Nicolas Maduro. In recent days, they’ve clashed outside the embassy with supporters of opposition leader Juan Guaido, who has called for a military uprising in Venezuela and has the support of the Trump administration.

“We feel that the elected government and the government that holds power and the government that’s recognized by the United Nations is the Maduro government, and they deserve to have their embassy here,” Code Pink co-founder Medea Benjamin told Fox News in an interview outside the embassy in D.C.'s Georgetown neighborhood, as rain drenched the activists outside. “That’s why we’ve been here.”

The United States and others countries believe Maduro's most recent election was fraudulent and have said he's not the legitimate president of Venezuela. But Benjamin has repeatedly said activists are there to prevent a “hostile takeover” of the embassy. Benjamin said the group has the permission of the Maduro government to stay in the embassy.

A State Department spokesperson in a Thursday statement called for the activists to leave, saying, “Any unauthorized individuals on the property are trespassers.”

“The Venezuelan government, led by interim President Juan Guaido, has legal authority over the Venezuelan Embassy in Washington, D.C.,” the spokesperson said, adding, “We encourage the remaining unauthorized individuals to vacate the building and to conduct any future protest peacefully and through legal means.”

On Tuesday, flag-waving and national-anthem singing demonstrators, many of whom were born in Venezuela, quickly outnumbered those from Code Pink. They gathered outside the embassy to protest Code Pink members' presence, demanding they leave. 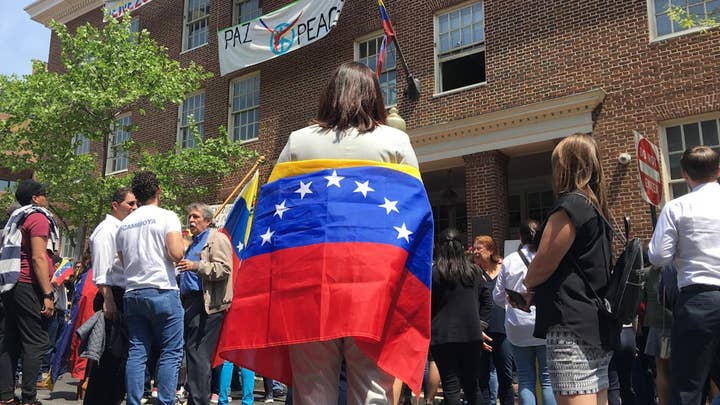 “This group – the Code Pink – has taken the embassy,” one pro-Guaido protester, Giuliano Gandullia, 40, told Fox News outside the embassy. “We want to enter. We want to take over. And demonstrate that it belongs to us.”

The gathering of protesters on Tuesday forced city police in Washington to close down 30th Street, as uniformed Secret Service officers stood between the Maduro and Guaido protesters.

But while law enforcement has been on the scene during protests, the activists inside have not been arrested or forced out.

Alaina Gertz, a spokeswoman for the D.C. police, said any police “involvement would be on public space and not diplomatic property.”

A member of the anti-war group Code Pink, and others attempt to bring food and supplies into the Venezuelan Embassy in Washington on Thursday. (AP Photo/Andrew Harnik)

Two Code Pink protesters standing at the door of the embassy this week held a sign that said: “Hands off Venezuela.” Another sign hanging from the building read, “Nicolas Maduro is the president.”

On Thursday afternoon, amid a downpour, Benjamin said the group isn’t afraid of being evicted and wouldn’t contemplate what the activists would do if Maduro leaves the country.

“I think it’s a silly question,” Benjamin said. “Because Maduro is not going to leave.”

Code Pink refers to the group's presence as the “Embassy Civilian Protection Collective” and says the pro-Guaido protesters are stopping new people, food and supplies from getting inside the building. Until recently, the group said, they were enjoying themselves.

“Inside it’s a very good collective – until this very aggressive mob showed up,” Benjamin said. “We were having events every single night. We were doing educational activities. We had over 100 hundred people coming into the events.”

Meanwhile, the pro-Guaido protesters are outside the embassy holding signs like “Venezuela wants Democracy, not another Cuba.” In interviews, these protesters emphasized that they are from Venezuela – unlike many of the Code Pink protesters.

“Those people right there, they’re not Venezuelan. They don’t have a passport. They don’t have our IDs,” said 32-year-old Clemente Pinate, who said he is from the country and came to the United States when he was 12.

The Guaido protesters are using bullhorns to call on Code Pink to the leave the embassy, which was officially closed by Maduro earlier this year.

“We’re here today to denounce the trespassing of Code Pink,” said Carla Bustillos, 39. “This is a property of the people of Venezuela. It’s an asset of the nation, and the nation is now facing a transition -- a transition to democracy.”