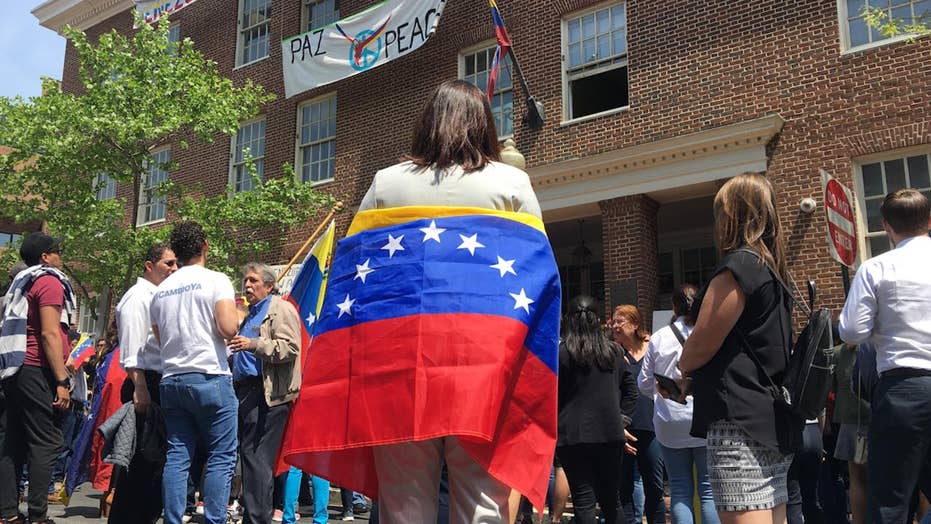 Chaos struck when supporters of opposition leader Juan Guaido clashed with pro-regime activists in support of embattled Nicolas Maduro on the now-shuttered Venezuelan embassy in Washington.

WASHINGTON -- Dozens of supporters of opposition leader Juan Guaido converged Tuesday on the now-shuttered Venezuelan embassy in Washington, clashing with pro-regime activists who have been camped out at the building for weeks in support of embattled Nicolas Maduro.

The tense scene in D.C.'s tony Georgetown neighborhood played out as Maduro's socialist government faced perhaps its biggest challenge yet, with Guaido calling for a  military uprising -- and the Trump administration voicing support from afar. Amid clashes on the streets of Caracas and global uncertainty over how the escalating challenge to Maduro's grip on power would resolve, dramatic footage from Venezuela's capital showed a military armored vehicle plowing into a crowd of protesters.

In Washington, flag-waving and national-anthem singing demonstrators, many of whom were born in Venezuela, quickly outnumbered those from the anti-war group Code Pink gathered to support Maduro's regime.

“Today is the day the Venezuelans are taking over the country,” one pro-Guaido protester, Giuliano Gandullia, 40, who was born in Venezuela, told Fox News outside the embassy.

The gathering of protesters forced city police in Washington to close down 30th Street. Barricades separated the two sides, with at least 10 uniformed Secret Service officers standing between the Maduro and Guaido protesters.

“This group – the Code Pink – has taken the embassy,” Gandullia said. “We want to enter. We want to take over. And demonstrate that it belongs to us.”

Activists from Code Pink, which protests U.S. support for Guaido, have been living and protesting at the embassy for weeks. On Tuesday, the organization asked supporters to “join us to uphold international law and protect the Venezuelan embassy from a hostile takeover.”  Elliott Abrams, the U.S. envoy for Venezuela, has said the group is breaking the law.

VENEZUELA’S GUAIDO CALLS FOR MILITARY UPRISING WHILE FLANKED BY SOLDIERS AT CARACAS AIRBASE: ‘THE MOMENT IS NOW’

Two Code Pink protesters standing at the door of the embassy on Tuesday held a sign that said: “Hands off Venezuela.” Another sign hanging from the building read: “Nicolas Maduro is the president.”

Meanwhile, pro-Guaido protesters came to confront the Code Pink activists, holding signs like “Venezuela wants Democracy, not another Cuba.” In interviews, these protesters emphasized that they are from Venezuela – unlike many of the Code Pink protesters.

“Those people right there, they’re not Venezuelan. They don’t have a passport. They don’t have our IDs,” said 32-year-old Clemente Pinate, who said he is from the country and came to the United States when he was 12.

“They are communists, socialists with Maduro,” he added. “I’m anti-Maduro. And I’m here representing my people.”

Activists from Code Pink, which protests U.S. support for Guaido, have been living and protesting at the embassy for weeks. On Tuesday, the organization asked supporters to “join us to uphold international law and protect the Venezuelan embassy from a hostile takeover.”  (AP Photo/Andrew Harnik)

The Guaido protesters called on Code Pink to the leave the embassy, which was officially closed by Maduro earlier this year.

“We’re here today to denounce the trespassing of Code Pink,” said Carla Bustillos, 39. “This is a property of the people of Venezuela. It’s an asset of the nation, and the nation is now facing a transition, a transition to democracy.”

Guaido, the 35-year-old leader of the opposition-led National Assembly, and a small contingent of heavily armed soldiers appeared in an early morning video promoting the “final phase” of his bid to oust Maduro. The United States, which has supported Guaido’s claim as interim president of Venezuela, offered its support for the opposition and its followers.