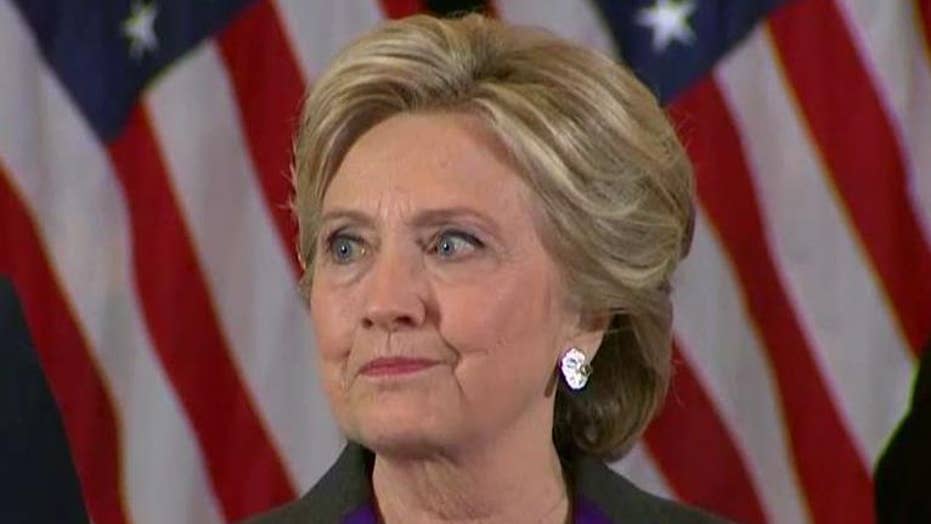 Hillary Clinton, in her first public remarks since her stunning defeat overnight to President-elect Donald Trump, urged her millions of supporters to “accept this result” and give her Republican rival a “chance to lead” as she voiced hope the country could move past the divisions of the grueling 2016 campaign.

“This is not the outcome we wanted or we worked so hard for, and I’m sorry we did not win this election … but I feel pride and gratitude for this wonderful campaign that we built together,” Clinton told supporters Wednesday in New York City.

She said “this loss hurts,” but said her campaign “was never about one person or even one election.”

“We must accept this result, and then look to the future,” Clinton said. “Donald Trump is going to be our president. We owe him an open mind and the chance to lead.”

She confirmed that she called Trump to congratulate him overnight and said she hopes “he will be a successful president for all Americans.”

The remarks confirm there will be no question about the legitimacy of Trump’s victory or expected challenges from her campaign, which briefly hinted the night before it was still waiting for key state results.

Running mate Tim Kaine introduced her Wednesday, saying Clinton “has been and is a great history-maker.”

Declaring victory on one front, Kaine said they “won the popular vote of America.” Clinton leads in the popular vote, though returns are still coming in. Because Trump won more than 270 electoral votes, however, Clinton lost the race.

Complementing Clinton’s message, President Obama said shortly afterward in the Rose Garden he has instructed his team to ensure a “successful transition.” He also has invited Trump to the White House on Thursday.

“The peaceful transfer of power is one of the hallmarks of our democracy,” Obama said, reminding Americans “we’re actually all on the same team.”

Obama, who aggressively campaigned against Trump during the 2016 race, said “it is no secret that the president-elect and I have some pretty significant differences.”

But he noted he and then-President George W. Bush also had differences eight years ago when he took over. A “sense of unity” is what the country needs, Obama said.

Clinton spoke Wednesday after staying out of the public eye overnight, as it was becoming clear she was poised to lose the race. As a somber mood set in at what was originally planned as her victory party, her campaign chairman John Podesta took the stage early Wednesday morning to declare several states were “too close to call” and the campaign would have nothing more to say at the time, urging supporters to “head home.”

Yet Clinton around that time was calling Trump to congratulate him and concede the race, effectively ending her second bid to be the first female U.S. president. She referenced the historical implications in her public concession Wednesday, saying: "I know we have still not shattered that highest and hardest glass ceiling, but someday someone will."

Trump briefly mentioned their phone call while speaking to cheering supporters early Wednesday morning at his victory party in New York City. Despite their hard-fought campaign, Trump praised Clinton for her service and said “it is time for us to come together as one united people.”

“I will be president for all Americans,” Trump vowed, after a brief introduction by running mate Mike Pence.

Sounding a call to “reclaim our country’s destiny,” Trump declared: “The forgotten men and women of our country will be forgotten no longer. … America will no longer settle for anything less than the best.”

While his victory stunned the political establishment, his campaign manager credited the phenomenon of “undercover Trump voters” and several other key factors Wednesday morning for their win.

Kellyanne Conway, speaking with “Fox & Friends,” said there was a “small but potent” force all along who didn’t reveal they planned to vote for the Republican nominee.

“It’s not that they’re embarrassed,” she said, but that they were “tired of arguing” about their political preference.