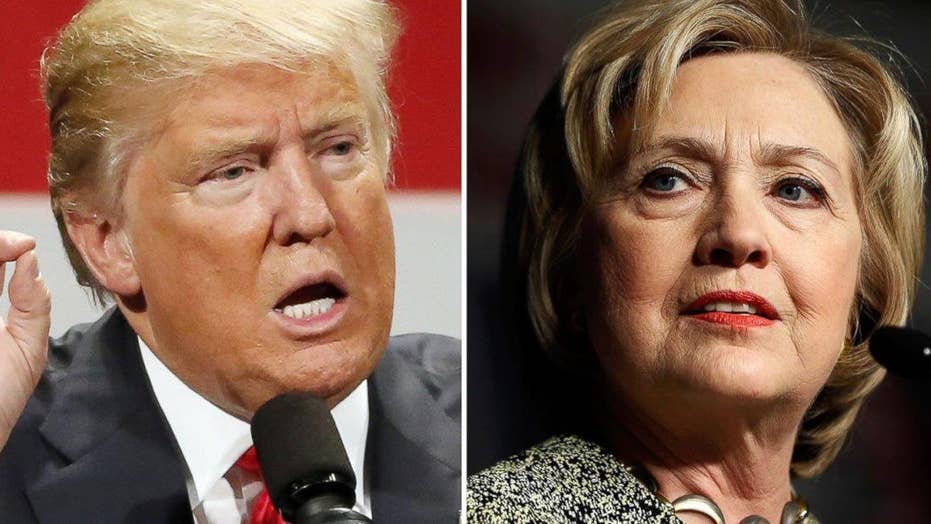 The campaigns for Donald Trump and Hillary Clinton on Saturday hunkered down in the handful of states that will likely decide their presidential race -- with Trump again improvising in Pennsylvania ahead of Clinton’s swing through the state’s two big Democratic strongholds.

The Trump campaign billed the speech in historic Gettysburg as Trump’s vision for his first 100 days in office, if elected.

Trump called for term limits in Congress and even vowed to stop the AT&T-Time Warner merger because, he argued, the deal and other similar ones result in "too much concentration of power.” But first he vowed to sue the women who have accused him in the media of inappropriate behavior -- a situation he says has “rigged” the election against him.

“Every woman lied when they came forward to hurt my campaign -- total fabrication,” Trump told the crowd. “The events never happened. Never. All of these liars will be sued after the election is over.”

Trump made two stops in Pennsylvania before heading to Virginia and Ohio, while Clinton and running mate Virginia Gov. Tim Kaine held late Saturday rallies in Pittsburgh and Philadelphia.

“There are no more devoted, selfless people than our Christian brothers in the United States,” Trump said at Regent University, a private Christian college in Virginia Beach, in an effort to keep Republicans’ dependable Evangelical vote.

The Hillary for America Campaign said about Trump’s comments in Gettysburg: “In what was billed as a major closing argument speech, Trump’s major new policy was to promise political and legal retribution against the women who have accused him of groping them.”

The race for the White House has, like in most modern-day presidential cycles, come down to which candidate will win the battleground states -- or those in which voters could swing either way.

With early voting already underway in several states, and with Election Day just 17 days away, Clinton leads Trump by 6 percentage points, according to the RealClearPolitics averaging of national polls.

As of Saturday, more than 5.3 million early votes have been cast, far ahead of the pace at this time in 2012.

Balloting is underway in 34 out of 37 early-voting states, both in person and by mail.

More than 46 million people are expected to vote before Election Day -- or as much as 40 percent of all votes cast.

Clinton has been the Democratic frontrunner for the entire race against Trump, the Republican Party’s unpredictable nominee.

She has leads in battleground states including Florida, Nevada, New Hampshire, Pennsylvania and Virginia, while Trump leads in Georgia, Iowa, Missouri and Ohio.

"I have a special place in my heart for Pittsburg," Clinton said Saturday in Pennsylvania. "I know we have work to do in Washington, but I think I can do it."

Pence started his day on the campaign trail in his home state, at the Future Farmers of America convention, in Indianapolis, where he praised agriculture as an economic and cultural pillar of the United States. He later joined Trump at a rally in Cleveland.

While many Americans see Clinton as better prepared to be commander in chief than Trump, she's consistently viewed unfavorably by more than half of potential voters. Most also consider her dishonest.

In Gettysburg, where Republican President Abraham Lincoln gave his famous address in November 1863 in an attempt to unite Americans amid the Civil War, Trump also called for new congressional term limits. And he said that he’d deport without delay immigrants who were imprisoned for violent crimes.