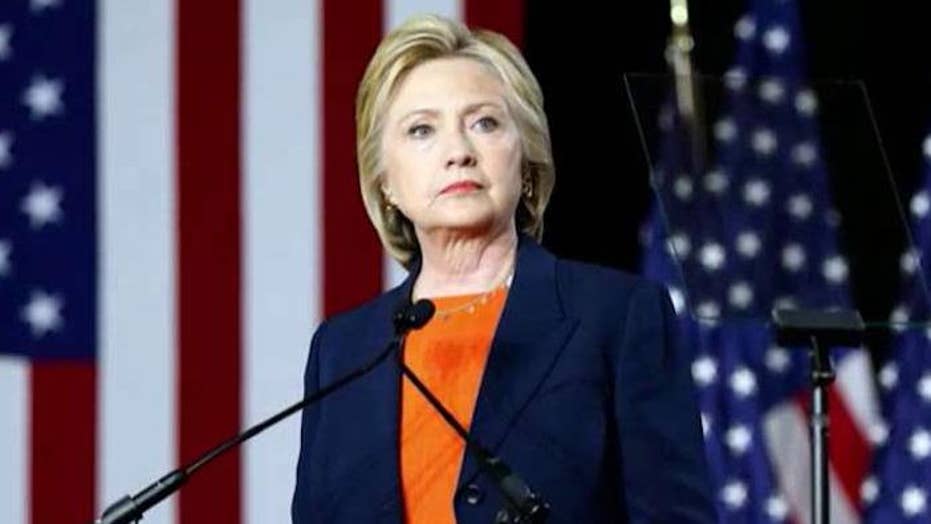 Hillary has made no public remarks despite being cleared in the server investigation; Jennifer Griffin explains on 'Special Report'

Clinton, the presumptive Democratic presidential nominee, made the proposal as a nod to primary rival Sen. Bernie Sanders, at the Democratic National Convention's full Platform Committee meeting in Orlando, Fla.

However, Sanders, who has yet to endorse Clinton, failed in his quest to include opposition to the Trans-Pacific Partnership trade deal in a draft of the Democratic Party's policy positions because several amendments against the deal were voted down by Clinton supporters.

The platform will be announced at the party's nominating convention in Philadelphia starting July 25.

On health care, Clinton's campaign says the proposal is part of her plan to provide universal health care coverage in the United States. Clinton also is reaffirming her support for a public-option insurance plan and for expanding Medicare by letting people age 55 year and older opt in.

"We have more work to do to finish our long fight to provide universal, quality, affordable health care to everyone in America," Clinton said in a statement, with the convention just a few weeks away.

Clinton's campaign noted that Sanders had promoted doubling money for primary care services at federally qualified health centers. Money for these centers was increased under the Affordable Care Act, an effort led by the Vermont senator.

According to the Clinton campaign, the candidate’s proposal would make money for these centers permanent and expand it by $40 billion over the next 10 years. Her campaign said the money would be mandatory and not subject to annual appropriation. The proposal would more than double the money for the centers, which currently get $3.6 billion annually.

Sanders, in a conference call after the Clinton campaign's announcement, said her proposal "will save lives" and "ease suffering" and represented "an important step forward in expanding health care in America and expanding health insurance and health care access to tens of millions of Americans."

The health care proposal follows on Clinton's recent announcement of new ways to tackle college affordability, including a plan that ensures families with annual incomes up to $125,000 pay no tuition at in-state public colleges and universities.

That initiative also was seen as a response to Sanders' call for free tuition at all public colleges and universities, an idea popular with the young voters who flocked to his rallies.

Clinton's policy overtures come as Sanders appears to be close to supporting her candidacy.

Two Democrats with knowledge of Sanders' plans told The Associated Press that Sanders was closing in on offering his public endorsement of Clinton. The Democrats spoke on condition of anonymity to discuss private conversations they were not authorized to disclose.

Clinton's campaign has announced a stop in New Hampshire on Tuesday but did not say whether Sanders also would attend.

Sanders told reporters that the two campaigns "are coming closer and closer together in trying to address the major issues facing this country."

Clinton and Sanders frequently clashed over health care during the primaries. Sanders campaigned on a "Medicare for all" plan that would have provided universal coverage. Clinton said that would undercut President Barack Obama's health law, rely too heavily on GOP governors and reopen a contentious debate with Republicans in Congress.

She has reiterated her support for a "public option" for states to set up their own health insurance plan to compete against private insurers.

Sanders was instrumental in passing legislation that would allow that.

Both supported a public insurance option at the national level but opposition from moderate Democrats prevented that proposal from being included in the health overhaul law.

Sanders scored a major victory Friday when the committee approved  an amendment calling for increasing the federal minimum wage to $15 per hour.

The self-described "democratic socialist" had repeatedly called for the increase during his surprisingly strong campaign for the Democratic nomination. Clinton, had backed a $12 minimum wage, while saying she approved a $15 minimum wage in certain places.

An early draft of the platform contained language more consistent with Clinton’s position, saying that “Americans should earn at least $15 an hour” without explicitly calling for that to be the new federal minimum.

However, the 187-member committee approved an amendment saying an increase from the current federal minimum of $7.25 an hour to $15 should happen “over time."

On the trade deal, during a combative meeting in a hotel ballroom, members of  full Platform Committee voted down amendments to explicitly oppose the deal and to oppose a vote on it in Congress.

Instead, they endorsed an amendment that included stronger language governing trade deals, including the TPP.

Sanders and Clinton have come out against the trade deal, but President Obama supports it.

Clinton supporters, including labor leaders, believed that toughening the trade language made enough of a statement without directly opposing the president, whom they did not mention during their public comments.

The amendment said that trade deals "must protect workers and the environment and not undermine access to critically needed prescription drugs." It went on to say that Democrats would apply those standards "to all trade agreements, including the Trans-Pacific Partnership."

Labor leaders said after the vote that their amendment made clear where they stand on TPP and that they oppose "bad trade deals." But Sanders backers expressed their frustration with boos and angry shouts.

Sanders supporter Benjamin Jealous, a former president of the NAACP argued that language opposing the TPP would help Democrats win the presidential election in November. "I want us to stop making it harder for us to win and start making it easier for us to win," he said.

Since Clinton effectively clinched the presidential nomination, Sanders has aggressively campaigned to include his progressive policies in the party platform. He has won a number of concessions, including a win Friday with an amendment calling for increasing the federal minimum wage to $15 over time, indexed to inflation. The previous platform draft had not included explicit language on a $15 federal minimum wage.

The party guidelines also have language endorsing steps to break up large Wall Street banks and urging an end to the death penalty. But Sanders is looking for more before the meeting concludes. He wants the platform to support a carbon tax to address climate change and seek a freeze on hydraulic fracking.

Sanders has so far avoided endorsing Clinton, but appears to be closing in on backing her campaign. He told reporters Saturday that the campaigns are "coming closer and closer together in trying to address the major issues facing this country."