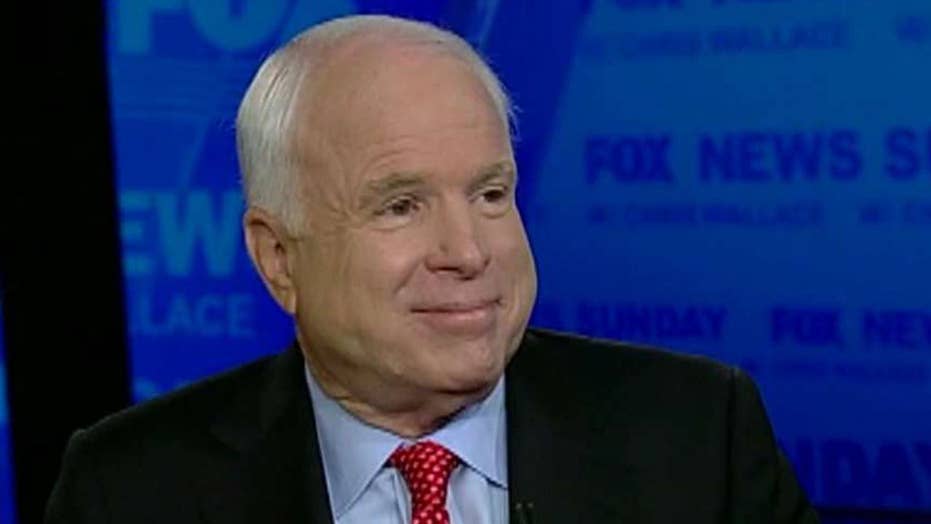 A look back at Senator John McCain's life and legacy on 'Fox News Sunday.'

In his more than three decades of service on Capitol Hill, Sen. John McCain was known for many things: his dedication to the United States, his passion and his temper, his strong convictions, and, maybe most notably, his ability to work across the aisle to get results.

That dedication to bipartisanship was on full display in the hours following McCain’s death at age 81 on Saturday after a yearlong battle with brain cancer as tributes from Democratic colleagues and rivals began to pour in.

“Few of us have been tested the way John once was, or required to show the kind of courage that he did,” Former President Barack Obama said in a statement. “But all of us can aspire to the courage to put the greater good above our own. At John’s best, he showed us what that means. And for that, we are all in his debt.”

Obama, who beat McCain in the 2008 race for the White House, said that despite their differences, McCain and he shared a "fidelity to something higher — the ideals for which generations of Americans and immigrants alike have fought, marched and sacrificed."

Obama said they "saw our political battles, even, as a privilege, something noble, an opportunity to serve as stewards of those high ideals at home, and to advance them around the world."

Speaking on NBC’s "Meet The Press,” former Secretary of State Hillary Clinton said “we could all talk for hours about what he meant to the country.”

“He leaves a legacy of service and courage,” Clinton said of McCain. “The courage we all came to know as a POW, but getting up every day and working for the people of Arizona wasn't easy.”

Former Vice President Joe Biden, who served with McCain in the Senate for more than 20 years, also issued a heartfelt statement about his longtime colleague and friend.

“John McCain will cast a long shadow,” Biden said. “His impact on America hasn’t ended. Not even close. It will go on for many years to come.”

Many commentators noted that McCain represented a statesman who was unafraid to cross party lines to achieve his goals and, that in the country’s current political climate, this ability will be missed.

But Democratic leaders in both the House and Senate over the weekend brushed aside these criticisms of their work and instead focused on their own friendships and dealings with McCain.

Senate Minority Leader Chuck Schumer, D-N.Y., praised McCain’s service both in the Armed Forces and on Capitol Hill and also said he would introduce legislation to rename the Russell Senate Office Building in Washington, D.C., after McCain.

“As you go through life, you meet few truly great people,” Schumer said in a statement. “John McCain was one of them. His dedication to his country and the military were unsurpassed, and maybe most of all, he was a truth teller -- never afraid to speak truth to power in an era where that has become all too rare.

He added: “The Senate, the United States, and the world are lesser places without John McCain.”

Schumer’s counterpart in the House, Nancy Pelosi, D-Calif., said on ABC’s "This Week" that McCain was a “source of great strength to our country.”

“I’m heartbroken,” she added. “America is in tears for the loss of this great man.”

McCain is expected to be honored in Arizona and Washington before being buried, likely this coming week, at the U.S. Naval Academy Cemetery in Annapolis, Maryland.