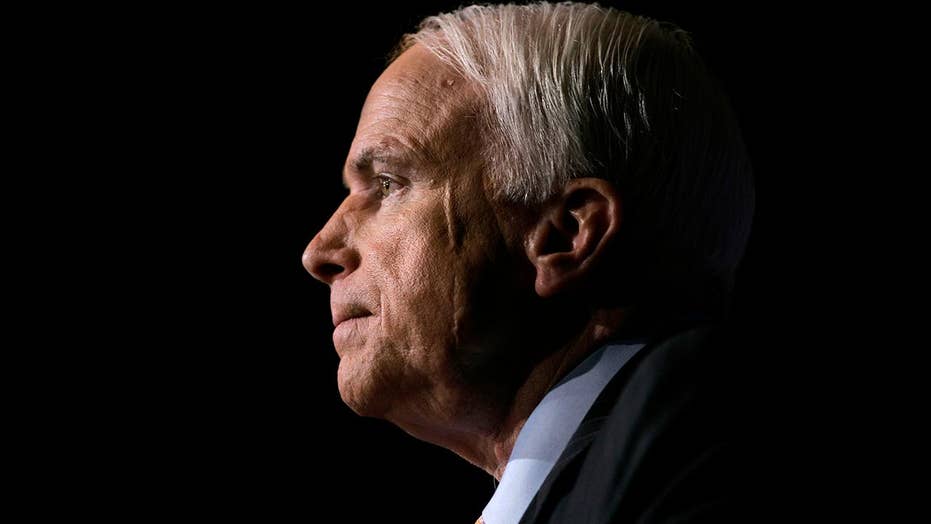 Former Sen. Jon Kyl on the legacy of John McCain

Former Republican Sen. Jon Kyl of Arizona detailed on Sunday the remarkable life of the late Sen. John McCain, recalling the lawmaker’s decades of service to the United States while downplaying talk that he could fill McCain’s seat.

“He was the conscience of the Senate,” Kyl said during an interview on "Fox News Sunday."

Kyl, who served alongside McCain, R-Ariz., in the Senate from 1995 until 2013, was named to the shortlist of potential candidates to be appointed to McCain’s seat by Arizona Gov. Doug Ducey. Along with Kyl, The Arizona Republic has listed McCain’s widow, Cindy, Ducey’s chief of staff, Kirk Adams, and the former U.S. ambassador to Finland, Barbara Barrett, as potential appointees to replace the late lawmaker.

Kyl noted that whoever is appointed to fill McCain’s seat will have big shoes to fill, especially when it comes to national security and international relations.

“[McCain’s] legacy is his commitment to national security,” Kyl said. “It was there that he made the most difference.”

“They key thing,” Kyl added about McCain’s replacement, “is to represent the state of Arizona, but also continue to represent all the people of the United States on an international level.”

McCain died Saturday after battling brain cancer for more than a year. He was 81.

The scion of a decorated military family, McCain embraced his role as chairman of the Armed Services Committee, pushing for aggressive U.S. military intervention overseas and eager to contribute to "defeating the forces of radical Islam that want to destroy America."

The son and grandson of Navy admirals, McCain is a former Navy pilot. He was elected to Congress in 1982 and to the Senate four years later, replacing the retiring Barry Goldwater.

Despite his famous stubborn streak and occasional ornery nature, McCain is widely admired on both sides of the aisle, and tributes poured in Friday after the family announced McCain's decision to stop treatment for brain cancer.

"We are so fortunate to call him our friend and colleague," Senate Majority Leader Mitch McConnell said on Twitter. McCain, his wife Cindy "and the entire McCain family are in our prayers at this incredibly difficult hour," McConnell said.

Ducey called McCain "an American hero" who always put his country before himself.

A "spirt of service and civility" guided McCain's life, standing as a model for Americans regardless of political affiliation, Ducey said.

Asked how he wanted to be remembered shortly before his death, McCain said simply: "That I made a major contribution to the defense of the nation."

One dramatic vote he cast in the twilight of his career in 2017 will not soon be forgotten, either: As the decisive "no" on Senate GOP legislation to repeal the Affordable Care Act, McCain became the unlikely savior of Obama's trademark legislative achievement.

Taking a long look back in his valedictory memoir, "The Restless Wave," McCain wrote of the world he inhabited: "I hate to leave it. But I don't have a complaint. Not one. It's been quite a ride. I've known great passions, seen amazing wonders, fought in a war, and helped make a peace. ... I made a small place for myself in the story of America and the history of my times."